Ghost Story or Not? Alfred Hitchcock Plays Coy with his Audience 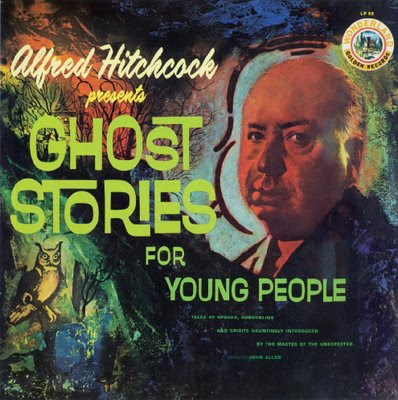 I like to surprise movie fans by telling them that Alfred Hitchcock never made a ghost story. He was much more fascinated by demons of the psychological, not supernatural, variety.1 That said, I have to admit that there is a spooky quality to his movies that the plot (or his famous storyboards) cannot fully account for. 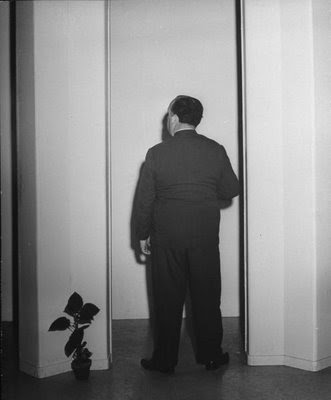 Hitchcock inspects his closet for skeletons -- and finds nothing.

I think he tried to cut the paranormal cake both ways. Rather than make movies overtly about spirit activity ala The Omen, Hitchcock subtly referred to an invisible realm that transcends the space/time continuum -- something like The Force in the Star Wars universe. The result is a body of works that haunt, without stooping to the funhouse trickery of rattling skeletons and misty apparitions. His movies don't howl at the moon; they get you to howl at yourself.

This free-floating life-force slips as silently as Hitchcock's camera among characters and creatures, imbuing them with an almost cosmic at-one-ness. Even Rear Window, a straightforward murder mystery, has an otherworldly quality. Lars Thorwald (Raymond Burr) kills his neighbor's dog because, in the words of Stella the housekeeper (Thelma Ritter), it “knew too much." Meanwhile, the neighboring songwriter's unfinished tune becomes a token for the unresolved conflict in Lisa (Grace Kelly) and L. B. Jeffries' (James Stewart) contentious relationship. But, like Pascal's heart, that song is following a train of thought about which Reason knows nothing. Its (haunting?) refrain is so beautiful that as its notes tinkle throughout the courtyard, it saves Miss Lonelyhearts (Judith Evelyn) from certain suicide. When he publsihes it, the author names the song – unwittingly, yet entirely appropriately – after our heroine: "Lisa." Not a ghost story, exactly. But there is something haunting about all these confluences opf circumstance.

There's also the opening scene of Shadow of a Doubt, in which Joseph Cotten's Uncle Charlie on the East Coast appears to link up psychically with his niece, also nicknamed Charlie (Theresa Wright), on the West Coast. Independent of each other they formulate plans to see each other. Let's not forget the scene in his 1936 Secret Agent, in which a dog uncannily "senses" the moment of his master's death some miles away and lets out a mournful yelp. Sort of eerie. But the spiritualistic angle is always played with a light hand.

Kim Novak's character Madeleine in Vertigo seems to be possessed by a dead person's spirit -- until we learn that she's a fraud, part of an elaborate plot to trick Scottie Fergusen (James Stewart).

And how do you account for the housekeeper Mrs. Danvers in Rebecca, whose adoring relationship with her employer turns strangely necrophilic after her death? On the face of it, she's simply a loyal employee -- a bit morose perhaps, but fully flesh and blood. So, what's up with all the goose bumps?

There are many more instances of the "supernatural-but-it's-not" in Hitchcock's films -- and they aren't always all that blatant. But they aren't so subtle that they can easily be explained away, either. M. Night Shyamalan should be so delicate.

Hitchcock was indeed fascinated by the supernatural. But his interest went deeper than the campfire goblins of a scary ghost story. It seems that he was concerned about spirit in all of its definitions, the nature of reality, and how cinema could blend the two.

In interviews, Hitchcock occasionally stated that his cinematic approach included treating inanimate objects as living characters. The way he saw it, props, sets, and locations are all part of the cast of characters. In his films, even background noise has a personality.

Think that's stretching it? Try listening to Rear Window with the picture turned off. The ambient noises of city traffic, foghorns, piano- and radio-playing are a perfect counterpart to the lonely characters playing out their roles onscreen. Just about every element is so carefully planned that each one seems placed there by some cosmic force, like destiny. Or, at least a highly cooperative and well-paid film crew.

While Walt Disney was down the street drawing singing broomsticks, Hitchcock accomplished somewhat similar effects using real props. A showcase example of his theory is Rope. The film relied on an unusual filming technique in which scenes were shot uncut in eight- or nine-minute takes. This required that walls, furniture, and other props had to "spring to life" in order to get out of the way of the camera as it moved from room to room following the action.

Hitchcock loved to show off the set's movable parts. Even the camera -- a stand-in for the audience itself -- was a character: I love that moment when the camera tilts down toward the dining table anticipating -- if not prompting -- Brandon's decision to transfer the meal into the living room.

By implying that natural objects are endowed with personality of a sort, Hitchcock was putting forth a distinctly animistic viewpoint, with all of the supernatural baggage that the term carries with it.

His animistic ideas undoubtedly came to him through his contact with the Germans. The director spent part of his early years hanging around such German film greats as Fritz Lang and F. W. Murnau, from whom he picked up his expressionistic style, meticulous attention to detail and aversion to on-the-set improvising.

Hitchcock also absorbed the philosophies that German artists and intellectuals were promoting at the time. Teutonic paganism -- which stressed that all matter is endowed with supernatural attributes -- was a big part of that. So were the writings of the 19th century philosopher Schopenhauer, who held that the universe is a manifestation of a cosmic Will that is at once a will-to-life and a will-to-death.2

The young director couldn't help but be affected by this -- it was a zeitgeist thing. In fact, some film scholars believe that Hitchcock's films are explicitly Schopenhauerist.3

In 1924, Hitchcock visited the set of Lang's "Die Nibelungen" (1924), a movie with strong undercurrents of German mysticism and destiny. I like to imagine the young British director strolling about the massive set pieces, humming Wagner's symphony of the same name, a tome by Schopenhauer or Nietzsche tucked under his arm. Dissolve to his production of Marnie 40 years later with its garishly expressionistic sets, Wagnerian score by Bernard Herrman, and Freudian symbolism. And, yes, there are traces of the supernatural in that film, too. 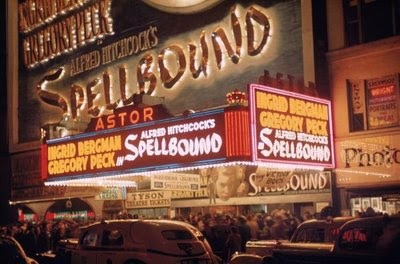 The Hitchcock film title that speaks most directly to the supernatural is Spellbound. It's a word that can refer doubly to a natural transfiction, or to occult possession -- striking that perfect balance of the two.4 And, with its Salvador Dali-designed dream sequences, creepy theramin music and psychotic trances, the movie can easily be read as a supernatural story masquerading as a psychological thriller.5

Hitchcock was oddly there-but-not-there in his movies, and that seems vaguely supernatural. By way of allusions to his previous movies, his traditional cameo appearance and other meta-textual tricks, Hitchcock weaved himself into his movies. Like the great Oz, he stands just off-camera, fiddling with the machinery of the film, playing his audience like an organ, and demanding a bit too loudly that we pay him no attention. Yet, the Wizard was a sham. Or was he?

In Family Plot, Barbara Harris' Blanche plays a bogus fortune teller. A con artist. And yet, in the final scene she uses what seem to be uncanny powers to find a cache of hidden diamonds. Her husband says, "Blanche, you really are psychic," and she turns to the audience and winks at us, as if to say, "You'll never know for sure." Ironically, this was the final shot of Hitchcock's final movie. He kept us guessing right into his grave.

Unquestionably, though, there is something bumping around in his movies. I'm uncomfortable labeling it "occult", but it certainly is metaphysical.

1 My argument goes something like this: Hitch never made a movie that was explicitly spiritistic. The closest he came was Vertigo (1958) and Family Plot (1976) -- both of which turned out to have fraudulent connections to the spirit world. (Likewise, Hitch's movies have been accused of being graphically violent. With the exception of the murder scenes in Psycho (1960) and FrenzyThe Birds (1964), his films contain very little on-screen violence. Hitchcock was the Master of Suspense, not of Violence. ) (1970), and

2 Hitler used these very same religious and philosophical ideas to galvanize the German nation to build the Third Reich. In fact, the Fuehrer was as much a Schopenhauerist as he was a Nietzscheist -- as well as a paganist. Which brings me back to Rope. Imagine Hitch's revulsion when he saw Hitler turn those theories around to suit his nefarious purposes! Perhaps Hitch saw a bit of The Dictator in himself and reacted with horror. The main theme of Rope is the repudiation of the Nietzschean idea that there can exist a fully evolved man who has the right to take another's life as he sees fit. Stewart's "I thank you for that shame" monologue at the end of the movie might have reflected the director's own thinking on the matter.

4 Spellbound can also describe the condition of the audience as they settle into a movie. Media critic Jerry Mander has cited studies demonstrating that viewers fall into a prehypnotic trance when they watch TV-their pulse rate slows, brain activity subsides, and their eyes fixate unblinkingly on the screen. The same could pretty much be said of movie audiences in 1945 (and today), and Hitch as much as said so, though he didn't have scientific studies available to back him up. Indeed, "Spellbound" explores that prehypnotic condition in various ways. I'll have to tell you about them some time. Suffice it to say that Hitch was deeply affected by the Nietzschean concept that "most people are dead." Hence, in the subjective P.O.V. shot when Murchison turns the gun on himself, i.e., on the audience, and annihilates himself (and the audience) Hitch is, in effect, declaring the audience D.O.A.

5 Shyamalan, by contrast, works the other way. His movies tell ordinary stories that are disguised as paranormal events.

Toff said…
Rebecca is sometimes called a ghost story (ghost stories not requiring ghosts, in fact). Banquo's Chair has one. Vertigo in general but the odd hotel scene in Vertigo in particular and Psycho in general (old dark house, etc.) but specifically the skull appearing over Norman if taken to be literal like a sign of possession also could argue for these being ghost stories.
February 24, 2010 at 12:45 AM