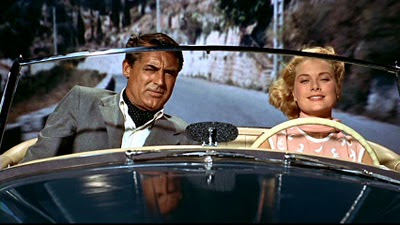 In To Catch a Thief, Grace Kelly glides along the Monte Carlo roads with all the grace her name implies, while Cary Grant contemplates a discreet way to change his underwear.

Alfred Hitchcock's blondes perfectly fit the description of the heroine of Sinatra's tramp-lady who "likes the free fresh wind in her hair." No wonder they all drive convertibles. 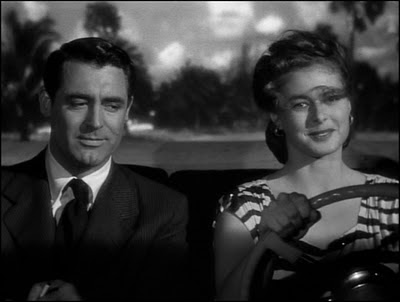 Alicia Huberman's convertible in Notorious (played by Ingrid Bergman) establishes her character as a free spirit, as does Frances' convertible roadster -- and her breakneck driving style -- in To Catch a Thief. 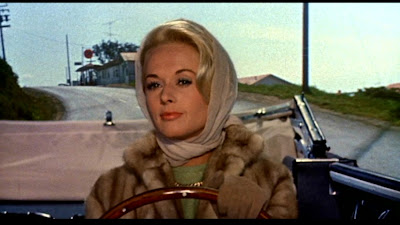 And then there's Tippi Hedren's Melanie Daniels and her Aston-Martin convertible in The Birds, though she throws on a scarf to protect her perfect, helmet-like coif. Jumping into Roman fountains is a thing of her past, as she seems to prefer the Bay of area of 'cold, damp California.' And the superior handling of this car also speaks to her efforts to control her world, even as she pushes the car to its limits on Hwy 101 to Bodega Bay.

Of course, there's the final scene of The Birds, in which the quartet of characters leave Bodega Bay in Melanie's Aston, which affords about as much protection as a paper napkin (or an American flag) from another attack -- and those seagulls and crows seem to know it.

On another, ahem, note, here are the full lyrics to "The Lady is a Tramp," which could easily be an anthem for Hitchcock's blondes -- even if Princess Grace of Monaco eventually came to enjoy gambling "with barons and earls.":

(By Rodgers and Hart)

She gets too hungry, for dinner at eight
She loves the theater, but doesn't come late
She'd never bother, with people she'd hate
That's why the lady is a tramp

Doesn't like crap games, with barons and earls
Won't go to harlem, in ermine and pearls
Won't dish the dirt, with the rest of those girls
That's why the lady is a tramp

She loves the free, fresh wind in her hair
Life without care
She's broke, but it's oke
She hates California, it's cold and it's damp
That's why the lady is a tramp

Doesn't like dice games, with sharpies and frauds
Won't go to harlem, in lincolns or fords
Won't dish the dirt, with the rest of those broads
That's why the lady is a tramp 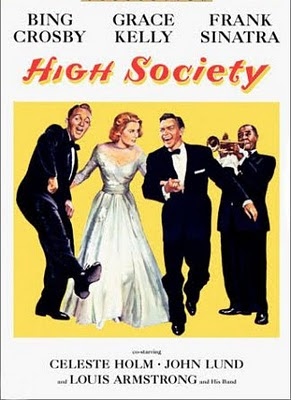