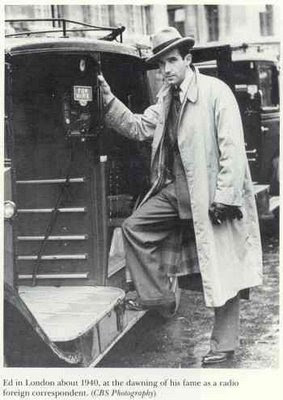 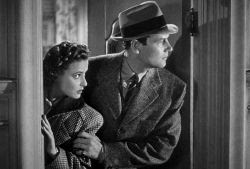 Joel McCrea as Hitchcock's foreign correspondent, with costar Laraine Day.
The January 23rd issue of The New Yorker features an article on Murrow entitled "The Murrow Doctrine," which, if you happen to be teaching a film class would make excellent required reading prior to a screening of Foreign Correspondent. According to the article, broadcast journalism was born in March 13, 1938, the day after Nazi troops entered Vienna. Murrow, who happened to be in Vienna at that time, offered a series of live radio reports on that military action and the local response to it. That, and the series of broadcasts that followed made him -- and several other CBS radio reporters -- an overnight celebrity.

Here are a couple of relevant quotes:

"When Murrow returned to the United States for a home leave in the fall of 1941, at the age of 33, he was more famous and celebrated than any journalist could be today.... [Along with other dignitaries,] Archibald Macleish offered the most eloquent of many ... encomiums, in which he said, "You burned the city of London in our houses and we felt the flames that burned it....

"[Murrow] seemed to experience life with a special intensity and empathy, and he could capture those qualities in his reports.... Murrow was among the first to use ambient sound in radio journalism, and he also called more vivid attention to the plight of Londoners, as well as to himself....

"During the war, Murrow never had to play the role of the dispassionate reporter. He was an important player in the Allied war effort, and, under the circumstances, that did not conflict with his journalistic role."

At the beginning of the film, Jones is a rather obtuse, un-self-examined reporter, but by film's end, he becomes the kind of self-aware, courageous, heroic, patriotic, outspoken journalist (or, should I say, propagandist?) who experienced life with an intensity similar to that of Murrow. (Interestingly, Murrow accompanied pilots on 25 extremely dangerous bombing missions, leading some to conclude that he had a death wish.)

Foreign Correspondent was released while Murrow was making those historic broadcasts, and audiences would have gotten the connection, I'm sure. Here's Jones' broadcast from the end of the movie:

"Hello America, I have been watching part of the world be blown to pieces ... I've seen things that make the history of the savages read like Pollyanna legends... {Bombing begins} I can't read the rest of this speech I had because the lights have gone out. I'll just have to talk off the cuff. All that noise you hear is the static. It's death coming to London. Yes, they're coming here now. You can hear the bombs falling on the streets and the homes. Don't tune me out. Hang on awhile. This is a big story and you're a part of it ... It's too late to do anything here now except stand in the dark and let them come. It's as if the lights were all out everywhere except in America. Keep those lights burning! ... Hello America. Hang onto your lights. You're the only lights left in the world."

It occurs to me that Foreign Correspondent -- one of Hitchcock's best films -- got its inspiration from a real-life protean figure whom the director must have admired and respected. Murrow seems to have embodied the kind of person to which some of his characters may aspire.
Alfred Hitchcock Film Criticism Film Philosophy Film Studies Foreign Correspondent Joel Gunz Movies