Alfred Hitchcock Exposed as the Man Behind the Camera 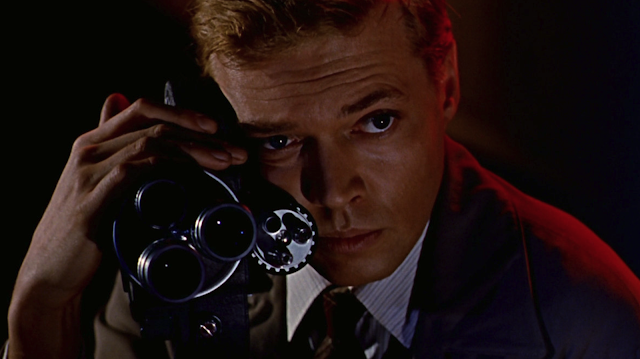 Michael Powell's portable keyhole.
I first saw Michael Powell’s 1960 horror classic Peeping Tom at a damp little art house theater. I was alone. It had been raining. And, yes, I was wearing an overcoat. I probably looked as sketchy as the title character. But I wasn't alone in that predicament. Alfred Hitchcock believed that we are all voyeurs and that a night out at the movies constitutes an act of voyeurism. But that's not all. He also knew we've got an accomplice: the director himself. Peeping Tom is every honest moviemaker's manifesto.
How important is this film? Martin Scorsese thinks it sums everything up:
"I have always felt that Peeping Tom and [Fellini's] 8½ say everything that can be said about film-making, about the process of dealing with film, the objectivity and subjectivity of it and the confusion between the two. 8½ captures the glamour and enjoyment of film-making, while Peeping Tom shows the aggression of it, how the camera violates... From studying them you can discover everything about people who make films."
In his review of Peeping Tom, Roger Ebert talked about its depiction of the "deep psychological process at work when a filmmaker tells his actors to do as he commands, while he stands in the shadows and watches." He's a super-voyeur. Come to think of it, is it possible to imagine a good film director who isn't at least a bit of a sociopath?
Alfred Hitchcock clearly saw himself this way, and Vertigo turns every movie house into his personal confessional booth. As far back as 1928, he equated cameras with assault weapons, with the disgraced heroine of Easy Virtue moaning to a press scrum, "Shoot! There's nothing left to kill." Think of the camera-as-Trojan Horse in Foreign Correspondent or or L. B. Jefferies' counter-assault at the end of Rear Window. (That these weaponized devices are ore often welded by journalists is another topic, for another time.)
With Topaz, however, cameras begin to turn against their owners. Passed from one spy to another, they're as vagrant and toxic as a killer virus. A double-dealing Cuban official leaves important documents out for an American agent to photograph. When he's caught, the agent escapes out the window, camera in hand, leaving him behind to face a likely execution. Later, the fate of another is sealed when she accepts the gift of a camera for espionage purposes. It's passed from hand to hand and even into a roasting chicken. Everyone who touches that little black box—the little hen included—is summarily eliminated. Conventional wisdom tells you to follow the money. In Topaz, to stay on the trail of death, follow the cameras.
I see this evolution in the use of the camera as a change of heart within Hitchcock, how he thought about cameras—and how he used them as a director. Regarding the Cuban agents' secreting the camera away inside a gutted chicken, in The Hitchcock Murders, Peter Conrad asks, "Is the photographer, like the bird, an eviscerated creature, lacking a warm, sympathetic interior?" Perhaps Hitch had been musing along those lines himself. I see a pun in there: in exposing the film in the camera, the spies are themselves exposed. Likewise, a film director’s greatest fear, like that of any voyeur, might be fear of exposure.
Which brings us to Tippi Hedren. I wonder if Hitch's portrayal of these devices could have been inspired by a feeling of shame over having been called out. Two films earlier, for the first time in his long career, an actor—Hedren—stood up to him privately (spurning an apparent sexual advance) and in public (Hitch claims that she insulted his weight on the set) and refused his direction. She exposed him as the man behind the camera, and I have to ask how deeply this affected him. Could this episode account for what Donald Spoto describes as Topaz’ "almost penitential energy"? It may also have fueled the angry sexualized violence of Frenzy (1972). Some claim that, after Marnie (or The Birds, if they happen to dislike Marnie), the director never again made a film as great as his previous best work. Various factors, such as advancing age, loss of creative control at MCA/Universal and his drinking problem likely factor in, too. That said, even second-rate Hitchcock is better the most anything else. Still, I think his own internal demons played into his decline as well. And I think that clues to some of these issues can be found in his films.
Alfred Hitchcock Books About Alfred Hitchcock Film Criticism Film History Film Studies Frenzy Marnie Martin Scorsese Tippi Hedren Topaz

Anonymous said…
Could Torn Curtain be Hitch's worst American film? Is it better than The Paradine Case, or worse? It sure is worse than the films that follow it, and definitely worse than the run of masterpieces that precede it. Still, Torn Curtain has wonderful moments, and has effective suspense. But the whole, I believe, is less than the sum of its parts. Comments?
johnpertle@mail.com
January 7, 2009 at 1:55 PM

Patrick said…
I'm just now finding this blog, and must admit it's becoming a very addictive read. Thanks so much!

It's an interesting point you brought up about Hitch's personal life, his anger, and perhaps the connection to 'Frenzy'.

While I enjoyed 'Frenzy' immensely, it always felt a little bit like to me that it was Hitch's "Dirty Old Man" picture, with the example you brought forth with the sexualized violence and even the nudity.

I, personally, could not see an actress such as Hitch's fave Grace Kelly appearing in a movie such as 'Frenzy'. The entire picture seemed filled with a dark sense of menace and yes, anger. Perhaps Hitch was going through some troubles with the studios, or it seemed like there were lots of location shoots in the film which I know Hitch detested. (I can even spot some rear-projection in some shots.)