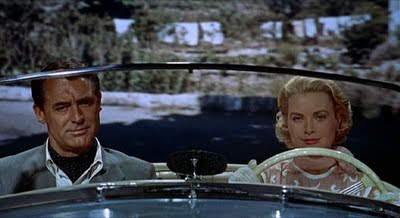 In To Catch a Thief, what, exactly, was Hitch driving at?

This is the first of a series of posts I wrote on Alfred Hitchcock, film and philosophy. To read the others, click here:
Part Two
Part Three
Part Four

"You’re like an American actor in an English movie," taunts Frances Stevens (played by Grace Kelly) in Alfred Hitchcock’s To Catch a Thief. Outside the film, though, the truth of the matter is the opposite. Cary Grant, who played the object of her tease (and sexual conquest), John Robie, was an English actor in an American movie. Fans of Cary Grant – and who wasn’t one in 1955? – would have caught the inside joke. They also would have picked up other references to Grant’s well known real-life story.

In one scene, Robie offered Frances a brief a rundown of his career, including his work as a trapeze artist who turns to cat burglary and then joins the WWII French Resistance. Grant, whose background as an acrobat and an undercover operative in WWII Germany, had a rather similar resume. Robie, however, left the circus in order to move hot diamonds while Grant went on to make cool millions in Hollywood. The wink-wink nudge-nudge implication is that Hollywood acting is a dishonest profession. Such details suggest that underneath the sex and glamor of TCaT, there is a consideration of the line that separates a screen actor’s "real" life and the life he or she takes on as a fictional character.

As such, TCaT is a philosophical film.

At least, that’s how I choose to read it. How nice it was when I recently encountered Oxford philosophy professor Stephen Mulhall, who advocates a philosophical approach that encourages the drawing, when justified, of such conclusions. Mulhall believes that some films, even cookie-cutter Hollywood blockbusters, can be philosophy, explicitly delving into philosophical issues. Thomas Wartenburg has also written along these lines. In fact an entire film as philosophy micro-industry has emerged, which includes studies not only of the philosophy of Hitchcock, but also of Seinfeld, the Simpsons and the Daily Show with Jon Stewart. Often, however, these latter books consider their shows as objects of philosophical consideration. Mulhall advocates a different approach.

Film as philosophy (as opposed to film as a generalized subject of philosophical inquiry) was the topic of a recent podcast presented by Philosophy Bites ("Bites" evidently being a noun, not a verb), which featured an interview with Mulhall. According to Mulhall, the "authority and relationship that exists between philosophy and film tends to be on the side of philosophy. The films exist in the discourse only as an object for philosophical reflection." The films themselves, he says, "don’t "have a voice in the discussion." Mulhall aims to give films that voice. He thinks that even a popular film such as Bladerunner can actually be philosophy – that is, it presents a philosophical question and then tries to answer it.

I think that, for Hitchcock, filmmaking was his forum of choice for philosophizing. True, he could be evasive about such intellectual matters in interviews, but once you start looking for it, his films are replete with philosophical inquiry. TCaT has widely been regarded as one of his lightweight works, a puff piece that’s all about beautiful actors plopped into a gorgeous setting in Southern France. I believe there’s more to the film than that. When Hitch set up such metatextual jokes as he did with TCaT, he was comparing the real-life experience of an actor to the contrived life of a fictional character. In so doing, he proposed at least one problem for philosophical inquiry: what really separates an actor from the role he or she plays in a movie?

The answer to such a question is very different from the answer one might receieve about the relationship a stage actor has to his theatrical role, for theater audiences are not far removed from the contrivance of stagecraft. (C.f. Luigi Pirandello.) Theater is oriented toward artificiality. Movies, on the other hand, go on location and employ other devices to convince audiences that what they are seeing is actually taking place. When we see Cary Grant swimming in the Mediterranean, he really is swimming. That he might in actuality be in a soundstage water tank is irrelevant insofar as we are made to believe that Grant is truly splashing around the beaches of Monaco.

In such a case, the actor can get so close to the role he plays that it can be hard to distinguish between the two. Further, the insistence on verisimilitude gives rise to questions about the nature of filmic reality. I’ll explore these ideas some more in the next post or two. As always, your comments on these thoughts-in-progress are welcome.
Alfred Hitchcock Books About Alfred Hitchcock Cary Grant Film Philosophy Film Studies Grace Kelly Stephen Mulhall To Catch a Thief