Posted by Joel Gunz on February 01, 2008
Gary at Attic Ghosts recently gained rare access to Alfred Hitchcock’s former residence in Scotts Valley, California. There he found two interesting pieces that had evidently been part of the house since the Hitchcocks' time. 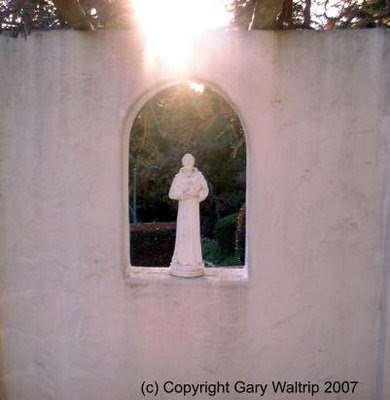 This appears to be a statue of St. Francis. 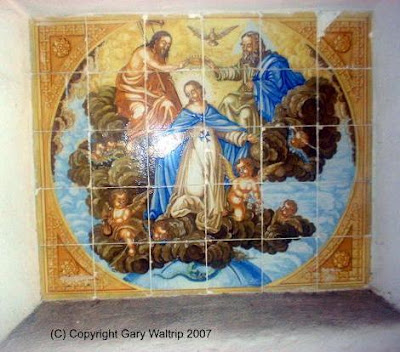 This mosaic seems to be a depiction of the coronation of the Virgin Mary.
What, if anything, are we to make of these? (Feel free to get in touch with me to correct or clarify my take on these images.) By his own admission, Hitch had an uneasy relationship with the Catholic Church. Although he received a strict Jesuit education, he reportedly was not a regular church-goer during his adult life. Asked in 1973 by the student newspaper of his alma mater, St. Ignatius College, whether he regarded himself as a religious person, his reply was evasive. "Religious, that is a pretty wide term," he said. "It is a question of one’s behavior pattern and a claim to be religious rests entirely on your own conscience, whether you believe it or not. A Catholic attitude was indoctrinated into me. After all, I was born a Catholic, I went to a Catholic school and I now have a conscience with lots of trials over faith." – From Alfred Hitchcock: A Life Spent in Darkness and in Light.

Hitch was not a Catholic in the strict sense. Afraid that he would be chided for making the kind of movies he was known for, he once turned down an opportunity for an audience with the Pope. His films suggest a more pantheistic approach to spirituality. On the other hand, he donated generously to the church. As a result, you can’t say that he wasn’t a Catholic, either. How typical of a man who refused to be pinned down to one dogma or another in his art!

Regardless of personal matters of faith and religiosity, we do know that Hitch loved art. He owned original works by such 20th century greats as Soutine, Modigliani, Dufy, Klee and others. Along with the overtly devotional objects shown on the Attic Ghosts site, Hitch also owned one of Rouault's beautiful-yet-grisly Suaires, depicting Jesus’ bloodied face print on his burial shroud. And then, of course, there are the 53-plus works of art that Hitch himself made, many of which cast Christianity -- Catholicism in particular -- in an ironic, ambivalent light.
Alfred Hitchcock Books About Alfred Hitchcock Joel Gunz

Unknown said…
Yeah, I've always viewed Hitchcock's relationship with the Church as strained but important. Some of his religious material is straightforward, but at times it can be ambiguous. For example, I've never been able to come to a firm reading of the nun at the end of Vertigo. (Save for perhaps a feminist reading of the character, although with this ideology the focus begins to shift away from religion itself.)

These Attic types seem to be making a pretty big fuss over the artifacts.
February 5, 2008 at 8:05 PM

Eric San Juan said…
Very interesting find, thanks for posting this. The religion symbolism Hitchcock sometimes injected into his films hasn't gotten a lot of ink over the years, but it's certainly there.