Posted by Joel Gunz on March 31, 2008
In an interview in PingMag, thrill ride designer and all-around arty-engineer type Brendan Walker talks about the influence that Alfred Hitchcock's techniques have on his design concepts.
He has some very interesting things to say. By way of introduction, let's recall a moment from the climax of Saboteur (1942). Barry Kane (Robert Cummings) has been falsely accused of sabotaging a U.S. airplane factory during World War II. The story that unfolds is a perfect example of the Hitchcockian double-chase, in which Kane must run from the police while also pursuing the real villains in an effort to clear his name. The chase ends at the Statue of Liberty, where the real saboteur, Nazi collaborator Frank Fry (Norman Lloyd) has slipped over the edge of the torch and dangles from the statue's thumb. (Note the prosthetic fangs Hitch instructed Lloyd to wear in this scene!) 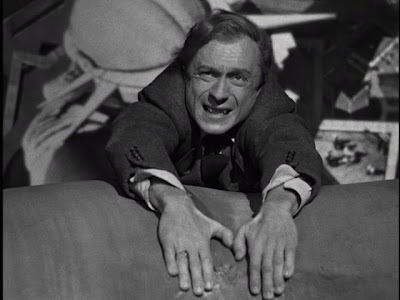 Kane tries to save him, putting his own life in peril. 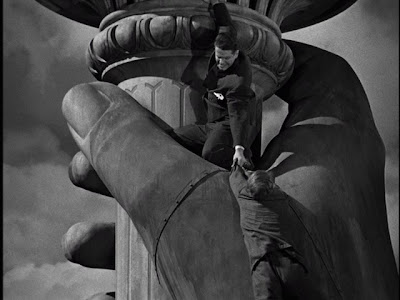 Thus, the double chase reaches its climax with a doubly-suspenseful cliffhanger. Truly, edge-of-your-seat movie making at its best. 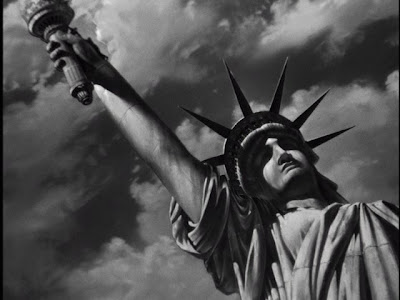 And when Fry slips away, the ostensibly morally justified thrill of watching the enemy fall to his death is perfectly attenuated with a cathartic relief of tension as we see (from the comfort of our theater seats) that Kane is going to be okay. 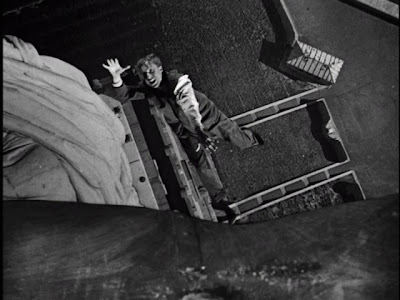 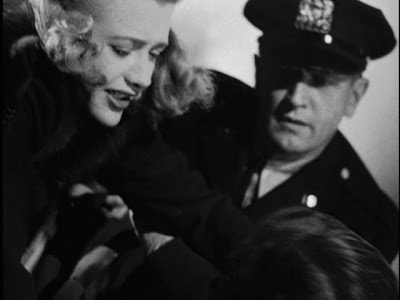 The final frames of the movie anticipate the ending of North by Northwest as Kane is lifted into the loving arms of Patricia Martin (Priscilla Lane) and we immediately fade to the ending credits. Like a good roller coaster ride, there's no need for a denouement to wrap up all the loose ends. (I discuss Hitch's on-again/off-again relationship with the denouement here.)

Thus Saboteur ends just the way Brendan Walker states a good thrill ride should end. He says: "It’s the release from fright which people find thrilling." Here's another part of his conversation with PingMag:

In dictionary terms, the differences are very subtle. But by my definition, thrill has high levels of both arousal and pleasure, whereas fright has high levels of arousal but low levels of pleasure. In terms of pleasure, ‘fright’ is exactly opposite to ‘thrill’. What’s interesting is that, in a horror film, tension and fright are unpleasurable. But from that low point, the pleasure has to increase to get back to “normal.” It’s the release from fright which people find thrilling.

Such distinctions are the stuff that Hitchcock made his living at parsing. He drew a line between the concepts of suspense and terror, once saying, "Suspense and terror cannot coexist. To the extent that the audience is aware of the menace or danger to the people it is watching -- that is, to the extent that suspense is created -- so is its surprise (or terror) at the eventual materialization of the indicated danger diminished." -- "The Enjoyment of Fear," Good Housekeeping, February 1949.

Walker has even devised a mathematical formula that attempts to methodologize the relationship between fear and thrill and their place in the "narrative" of, say, an amusement park ride:

Walker insists that his formula is, perhaps, more illustrative than practical. Still, it can form the basis of some interesting creative approaches. He explains it this way:

The intensity of thrill you experience during any activity is controlled by three things:

The level of thrill you actually experience ‘T’ depends on:

a. how quickly your Pleasure and Arousal changed over Time (that’s the first VA/t) and

b. the amount of change in pleasure and arousal (that’s the second VA).

As a general rule as you’re designing, just imagine how you might be affecting your rider. You can slowly raise arousal, but then give a quick boost of pleasure. You can raise arousal, make someone feel unpleasant (horror) which is then released as relief (with a dopamine rush of thrill) - there are many ways you can start playing around with ideas!

And Hitch played with those very ideas for over half a century!

You should read the full article, though, to get a sense of what this guy is bringing to the table. And when you're done, if you're interested, check out the piece I wrote on the relationship between the enjoyment of fear and the fear of enjoyment, which goes into more detail. I invite your comments.

Dave Pattern said…
Hitchcock said this in a 1964 interview for the BBC:

"I believe in putting the horror in the mind of the audience and not necessarily on the screen. I once made a movie, rather tongue-in-cheek, called “Psycho”. And, of course, a lot of people looked at this thing and said “What a dreadful thing to do. How awful”, and so forth. But, of course it was to me... it had great elements of the cinema in it. The content, as such, was I felt, rather amusing... and it was... it was a big joke, you know? And I was horrified to find that some people took it seriously. It was intended to cause people to scream and yell, and so forth, but no more than the screaming and yelling on a switchback railway."

The comment comes at the end of this section...
http://www.youtube.com/watch?v=ydvU64L758c