"North by Northwest"'s Roger O. Thornhill is now on Twitter 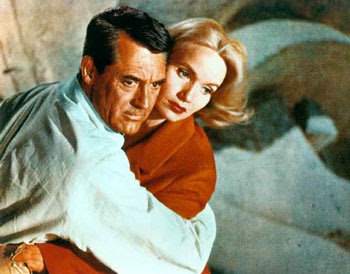 With that in mind, I've created a new Twitter identity named @Roger0Thornhill. Roger, of course, is the gray-suited Madison Ave. advertising executive featured in Alfred Hitchcock's 1959 masterpiece North By Northwest.

Not only do real people connect on Twitter -- you can follow me, too, if you'd like -- but a number of figures from history, religion, the arts and the movies are showing up. (Click on those links and you'll see that Twitter can veer into something less than reality.) Characters from TV's Mad Men, such as Don Draper and Roger Sterling and1950s advertising guru David Ogilvy have also joined the fray -- and they are all tweeting each other. It's a crossroads of fan fiction, social media, virtual reality and a complete waste of time.

One factoid that adds interest to this undertaking: The Saul Bass-inspired opening credits -- as well as much of the characterization -- of Mad Men are derived from NxNW.

Roger's agency, Thornhill/Kaplan, is also courting me to handle PR for a book I am writing about Hitchcock's films. I have no comment at this time other than to say they've made the short list.

I invite you to follow Roger. He promises to keep his tweets to a minimum. He's too busy schmoozing clients and headhunting Sterling Cooper to do more than that.
Alfred Hitchcock Film Philosophy Film Studies Joel Gunz Mad Men North by Northwest