Getting to Know Alfred Hitchcock through "Notorious"

Posted by Joel Gunz on December 07, 2008
Update: Why stop at this post? Better yet, why start here? Two other posts came before it, discussing this business of Hitchcock's emotional honesty as revealed in Notorious. Get the whole picture by going here:
Part 1 - Notorious and Hitchcock's Lovability
Part 2 - What Notorious Reveals about Hitchcock

I’ve come to feel a certain affection for Alfred Hitchcock. His emotional honesty, revealed through the thin veil of his films endears me to him.* Notorious is a prime example. Dan Auiler commented on my November 30 post, saying, “Your reading of Notorious makes this already near perfect film more touching – I've always found this film to be on an equal footing [with] Vertigo when it comes to stirring deep emotions. I cannot watch either film without being overwhelmed emotionally.” 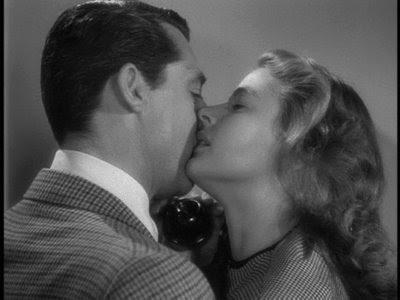 Alicia Huberman (Ingrid Bergman) clings desperately to the one man who may believe in her basic goodness, yet she is never sure where she stands with him until she endures a trial by fire -- and he comes to her rescue.
Numerous moments in Notorious were evidently drawn from Hitchcock’s own life. Take, for example, the imperiousness with which his mother, Emma Hitchcock, is said to have treated him. Hitchcock said that he was expected to report to his mother at the foot of her bed each night and tell her about his day’s activities. Similarly, in the film, Alexander Sebastian (Claude Rains) visits his mother (played by Leopoldine Konstantin) in her bedroom to report, first, about his upcoming marriage to Alicia – a faltering attempt to assert some measure of adult autonomy – and later, humiliatingly, to admit that he has fallen in love with and married a spy. The otherwise effusive, debonair Alexander is, in these scenes, callow and palpably shameful around his mother. And she, on the other hand, is a classic narcissist – devaluing, manipulative and condescending toward her son. 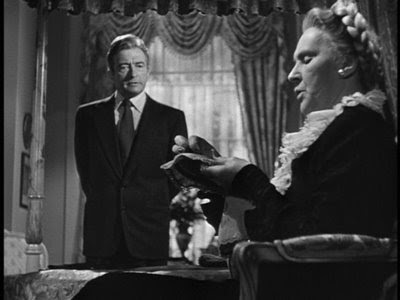 Alexander announces his intention to marry Alicia: “All these carping questions are merely the expression of your own jealousy, just as you've always been jealous of any woman I've ever shown any interest in.” 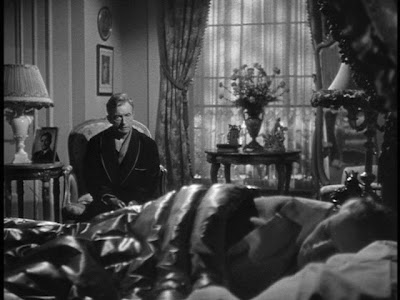 Later, Madame Sebastian, upon hearing that Alicia is a spy, says: "We are protected by the enormity of your stupidity.... You're almost as impetuous as before your wedding."
A lot has been written about the numerous domineering mothers that show up in Hitchcock films, but it’s in Notorious that we see the timid little boy that Hitchcock might once have been – and the with feelings that may have persisted in his adult years. No wonder both he and his fictional alter egos had such a hard time with women!

Devlin (Cary Grant) is a very interesting character. From the very first scene when he punches Alicia in the jaw, we suspect that Grant won’t be reprising one of his comedic roles. He plays a cad. Devlin behaves like an ass and the only honest thing he can do is to admit as much at film’s end, saying, "I couldn't see straight or think straight. I was a fatheaded guy, full of pain."

As I pointed out in my November 30 post, Devlin -- along with, to a perhaps lesser extent -- Alexander, is the character that Hitchcock seemed to identified most with. Hitch had a reputation for putting actresses through a grueling ordeal in order to achieve his desired dramatic effects. I'll leave it to others to determine whether what he did was morally right or wrong. But it was all in service of one master: the art of the cinema. Hitch was uncompromisingly faithful to that muse, even if it meant hurting the one he loved. For such behavior, Hitchcock never asked for pity. He was aware of the emotional costs involved -- and Notorious is one of the great expressions of that tension. For Hitch to create such a movie required enormous self-knowledge, honesty and courage – not to mention humility. This isn't the behavior of a typical misogynist.

Yet, celebrity biographer Donald Spoto and others have trotted all sorts of examples from Hitch’s life and films to try to prove that the director was a misogynist or worse. Such charges don't ring true for me. Sexists and other haters are usually defensive of their behavior; they don't recognize it as necessarily wrong -- and rarely are they repentant.

Instead, in Notorious, almost all audience sympathy is reserved for Alicia. Used as a shill for the U.S. government, sexually exploited and nearly dying from slow poisoning, she endured more abuse than almost any screen heroine ever has. Interestingly, Hitchcock carefully constructed the story so that audiences would be moved with pity for her -- at Devlin’s expense. Such treatment suggests that Hitchcock was intensely self-aware -- and unflinchingly honest about the costs such actions might have had on his character. He walked the razor's edge and knew it.

This could only have been the work of a compassionate man who knew well what it is like to put the thing he loves in harm's way. From this well of deeply felt emotions he told one of the most poignant tales in film history. Such sympathies draw me to Hitch as a very human, even humane, person.

*From a philosophical perspective, the fact that film is itself a thin veil that prevents theater-goers from sitting in the dark is an irony that I doubt was lost on Hitch.
Alfred Hitchcock Cary Grant Film History Film Philosophy Film Studies Ingrid Bergman Notorious

Josh Williams said…
I just watched Notorious a few days ago- LOVED IT. I did not know all of this information about his own life though. very interesting. You can read some of my personal movie reviews, including some Hitchcock reviews, at joshwilliamsmovies.blogspot.com
January 3, 2009 at 1:46 PM

Omer Syed said…
One of the things that really stood out to me about Notorious is what Jean Luc Godard had once said about Hitchcock, how he makes a shot of something as simple as a wine bottle and turn it into an iconic image that stays with you.
September 4, 2011 at 1:00 AM

Daniel Pfeiffer said…
Notorious is one of my favorite of Hitchcock's films, and one I return to again and again. I find the depth of writing for, and performances of, the three leads remarkable. Also, this film contains one of my all-time favorite Hitchcock shots - at the beginning of the party scene, where the camera passes from a broad shot of the party over the staircase and zooms in on the key to the wine cellar in Alicia's hand...From establishing shot to the most intimate, immediate detail of the character's place in the story in one glorious sweep. Hitchcock is forever. PS - love the blog...Just one complaint -- more entries!
July 25, 2012 at 1:38 PM

Blakeney said…
I’ve been enjoying your reviews very much, and look forward to reading more of them. However, I can’t agree with your analysis of Hitchcock as humane. One of the director’s gifts was that he understood the human condition very well, and had a keen insight into human fears and motivations. When appropriate, he used these talents to engage and elicit audience sympathy. But that understanding doesn’t necessarily make the man himself humane.

Sexism is a label that describes objectifying women - and there is some evidence in his films that Hitchcock may have done so. But I think it’s more accurate to say that he may have objectified other people, regardless of gender. His quote about actors being cattle comes to mind. I think Hitchcock may have been an artist to whom the end was always justified by the means. And to whom people were something to observe, analyze, and occasionally use - more so than interact with.

Devlin exemplifies this in his opening scene. We are introduced to the character as mysterious figure, quietly sitting and observing Elsa. We know that Devlin is considering her for a role, though he himself doesn’t know quite what the role is yet.

Devlin claims sympathy (love) for his talent (Elsa) but is perfectly willing that she should sacrifice herself and her safety for the sake of the artwork (in this case, the infiltration plan). He also shows himself to be petty, jealous, and brutal when the talent seems to divert from expectations. No matter how noble the cause, the depth of such feeling is to be questioned. I love Hitchcock’s artistry, but have difficulty admiring him as a person.