Posted by Joel Gunz on January 11, 2009
(This review originally appeared in the November 30 issue of "The Oregonian".) 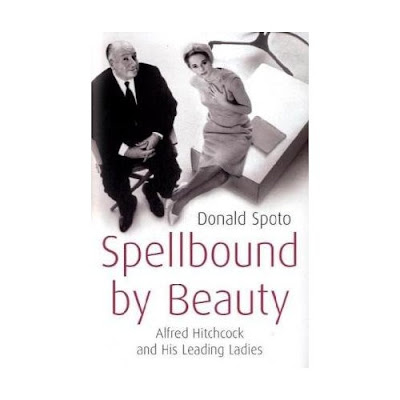 Digging the Dirt on Hitchcock Leaves the Author Vulnerable

Ingrid Bergman. Kim Novak. Grace Kelly. These legendary screen stars and others owe their immortality in no small part to a rather unlikely impresario: the obese, deeply phobic son of a Cockney greengrocer, Alfred Hitchcock. While other directors accentuated the curves and smoldering sensuality of their leading ladies, Hitchcock iced things down, straightjacketing his beauties into demure pencil skirts and creating that countervailing Hollywood icon: the cool Hitchcock blonde.

Those relationships are examined in Hitchcock expert Donald Spoto’s third book about the director, “Spellbound by Beauty: Alfred Hitchcock and His Leading Ladies.”

Part biography, part analysis, this book covers almost the entire sweep of Hitchcock’s career, beginning with his early days in Britain’s silent film industry and ending – except for a brief coda covering his final decade – in 1964. Spoto focuses on the director’s professional collaboration and personal relationships with these women, adding behind-the-scenes insight into how Hitchcock elicited some of the screen’s most memorable performances. In his foreword, Spoto promises to tell a tale of “Hitchcock’s sadistic behavior and his occasional public humiliation of actresses” and later cites as an example an occasion when the director slapped Joan Fontaine in order to induce tears for an emotional scene in Rebecca.

But it’s in the book’s final three chapters where he delivers on that promise in full detail.

It has long been alleged that Hitchcock made a series of improper sexual advances toward Tippi Hedren, star of The Birds and Marnie – leading to a bitter falling-out – but Hedren has never gone on record to describe those events in any detail. This book fills in those gaps and a picture emerges of an excruciatingly painful and embarrassing time for her.

That episode aside, separating fact from the author’s scornful language, inflated with innuendo, is, at times, difficult. Take, for example, the above-mentioned slap: it had been delivered at Fontaine’s own request, yet Spoto uses it to demonstrate that Hitchcock had created an unpleasant atmosphere on the set.

Clearly, Hitchcock had his obsessions and weaknesses; over his half-century-long career he developed crushes on one or another of his leading ladies. Still, most of the actresses with whom he worked spoke fondly of their experiences with him. Spoto minimizes and dismisses that part of the story – even as he complains that Hitchcock partisans would “ignore or minimize” the “pain for which he was responsible.”

As a researcher and film scholar, Donald Spoto has few peers. His strength lies in his expert insights into Hitchcock’s films. With “Spellbound by Beauty”, however, his attempt to peer into the personality of Alfred Hitchcock the man reveals more about the biographer’s biases and character tics than it does those of the Master of the Suspense.
Alfred Hitchcock American Film Institute Film Criticism Film History Film Studies Marnie Tippi Hedren

Anonymous said…
great content. love what info you have. more posts about how Bernard Herrmann really captured musically the visual ideas Hitchcock was purveying. i think this is why i love Mad Men so much. they totally ripped off Hitch's cinematography!!
January 11, 2009 at 6:10 PM

Joel Gunz said…
Hi there - Thanks for stopping in! If you don't already own it, "Hitchcock's Music" by Jack Sullivan offers a movie-by-movie description and explanation of the music -- including all the incidental music -- in Hitch's films.
January 11, 2009 at 6:20 PM

Anonymous said…
Donald Spoto is barking up the wrong tree. I liked "The Art of Alfred Hitchcock" but can't stand "The Dark Side of Genius". I believe he is too distracted by rumor, innuendo, gossip, and personal projection. Everyone has flaws and errors. By sensationalizing Hitch's alleged personal life, Spoto does Hitchcock's art a disservice. It is also a dishonorable invasion of the privacy of the actresses discussed. johnpertle@mail.com
January 12, 2009 at 10:15 AM

Anonymous said…
I had a few problems with the book, as well - although my objections differ from yours.

I think this book was an interesting idea in theory but doesn't quite execute what it aims to. I don't think Spoto ever convincingly explains why each Hitchcock responded differently to each actress (why did his crushes on, say, Grace Kelly and Ingrid Bergman stay unrequited and to himself, but force himself sexually upon Diane Baker and Tippi Hedren?).

Also, North by Northwest is one of Hitchcock's signature films, yet I'm not sure that his working relationship with Eva Marie Saint even warrants a whole paragraph.

He also never explores the correlation between what happens on screen and off. Surely with Kim Novak getting thrown from the top of a tower - twice - in Vertigo, Janet Leigh being cut up in the shower in Psycho and Tippi Hedren being attack by birds in, uhh, The Birds lends itself to some analysis with the other issues with women. There must be some connection, no?

I also didn't learn anything about Vertigo and/or Kim Novak other than she was high maintenance and Vera Myles was Hitchcock's first choice for that part.
January 19, 2009 at 9:18 PM

Alexis said…
I am currently reading this book and it is fantastic to find a review and others who are equally as interested in the subject. I love Donald Spoto's work. I know he is biased in some of it, but it brings personality to the reading. I recommend his book "Notorious" about Ingrid Bergman, the read is fantastic. I love Ingrid and Hitch so I bring my own biases to the reading table!
March 1, 2009 at 10:23 PM

Daveland said…
Spoto can be an excellent writer; I have a number of his books (I believe the Marilyn Monroe biography is probably the best and least hysteric one out that is based on facts, not sensational innuendo). Still, he has pumped the Hitchcock well dry. I lost a little respect for him when he rushed a book out on Princess Diana shortly after her death. Well-written or not, its release seemed somewhat tacky. After his Ingrid bio, he told me that he was done with Hollywood biography and moving onto more spiritual topics. Apparently, Jesus and St. Francis didn't pay the bills, as it wasn't too long before he was back writing about Hitch, Audrey Hepburn, and Grace Kelly. Hitch was probably overly controlling of Hedren during the making of her two films with him, but I also feel that Spoto has blown their "incident" out of proportion. When talking about "Marnie" with me, she teared up and said, "That was a very special time for me." Spoto's writing has gotten more bitter and bitchy over the years and I have lost interest in reading his work.
June 3, 2010 at 11:51 AM

Barry Welsh said…
Hey there can anyone tell me where the following quote about Hitchcock is from? - "Once again a love triangle. This time triggered by the woman who is a very erotic object of desire. The actresses of his films are very sensual. The way women are presented, the fact that they often undress, the way they wear and show their underwear, or suggest it. There’s an extraordinary scene in The Manxman in which she’s undressed. Carl Brisson, her husband to be, climbs up to her window tells her he’s leaving and asks her to wait for him. She realises she can’t receive him in her underwear and hides. She covers herself up. But when she sees him at the window, standing on her other wooer’s shoulders, she manages to show that she’s undressed, even though she’s covering herself. This is the sort of thing that...is conveyed through this extraordinary silent language he designed."
August 8, 2012 at 7:35 AM