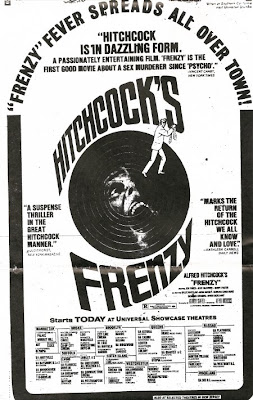 At his blog The Hitchcock Papers, Web denizen John Greco has amassed a small fortune of photo stills, lobby cards and newspaper ads dealing with Alfred Hitchcock and his films. The site is well worth your attention, and I'm sure I'll be stopping by periodically. As with all classic film, Hitch's movies are shown primarily at independent theaters and art houses, or are simply rented on DVD. It's easy to forget that they were originally part of the mass entertainment landscape. John's site does a great job of returning them to the media context in which they were released.
Alfred Hitchcock Film History Film Studies John Greco

ratatouille's archives said…
Hi! Joel Gunz,
I have already added the link to my blogroll.
Very interesting info(rmation) about the "Master of Suspense."
Thank-you!
Dcd ;-D
February 20, 2009 at 3:15 PM