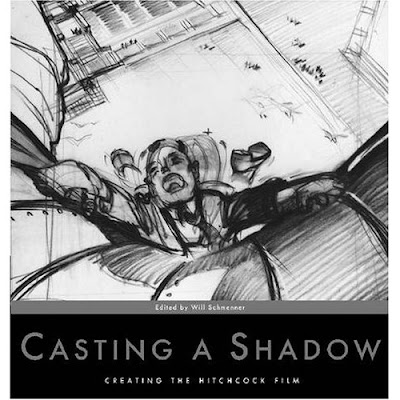 I missed it when it was in Evanston, Illinois at my girlfriend's alma mater. I let the opportunity get away when it subsequently moved to Los Angeles. Now I have a third opportunity to catch the museum exhibition, "Casting a Shadow. Creating the Alfred Hitchcock Film". But I'd have to travel to Berlin, Germany to see it. Probably won't happen.

That's too bad, because this show will be augmented with material that illuminates one of Hitchcock's most interesting periods -- the time he spent in Germany, steeping in its Teutonic expressionism and gaining insider access to such greats as Fritz Lang (dubbed the German Hitchcock) and F.W. Murnau.

Alfred Hitchcock presented himself as the sole author of his films – as if they were the direct expression of his creative genius. In reality, however, Hitchcock was a deeply collaborative artist, working intensely with actors, producers, cinematographers, screenwriters, editors, and production and sound designers to create what the public knew as "an Alfred Hitchcock film." Through drawings, paintings, storyboards and documents, the exhibition explores this film making process.

"Casting a Shadow" was first presented in 2007 at the Mary and Leigh Block Museum of Art at Northwestern University in Evanston/Illinois. Afterwards it was shown at the Academy of Motion Pictures Arts and Sciences in Los Angeles. Many of the exhibits are from their archives. The Museum für Film und Fernsehen will bring this Alfred Hitchcock exhibition to Berlin - it's only stop in Europe. The show will be augmented by exhibits from the Museum’s own archives, in particular those illuminating Hitchcock’s relationship to Germany and Berlin.

I've got the show's companion book, edited by Will Schmenner and Corrinne Granof. It's indispensable reading for Hitchcock geeks. But it would sure be nice to catch the exhibit. Oh well, such are my personal obligations and budget that the opportunity will have to pass on by.

If you happen to be in Berlin before May 5, try to see the show. And let me know what you think.
Alfred Hitchcock Books About Alfred Hitchcock Casting a Shadow Film History Film Studies