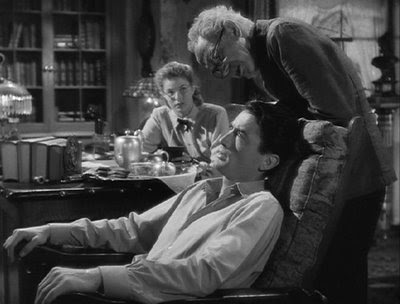 J.B. (Gregory Peck) has his head examined in Spellbound.
A new study conducted by New York University suggests that Alfred Hitchcocks’s TV shows stimulate the brain more completely than other shows. In a new field of study called neurocinematics, researchers recently used MRI technology to monitor brain activity while subjects watched movies and TV shows. They showed clips from Sergio Leone's The Good, the Bad, and the Ugly, an episode of Alfred Hitchcock Presents and an episode of the HBO series Curb Your Enthusiasm.

The Hitchcock episode – “Bang! You’re Dead” – rated the highest of the three.

According to an article published at Scienceblogs.com, Sergio Leone’s spaghetti western produced an ISC score of 45%, while Larry David's mock reality show scored a mere 18%. The Alfred Hitchcock Presents episode, on the other hand, induced viewers to score that show a 65%. 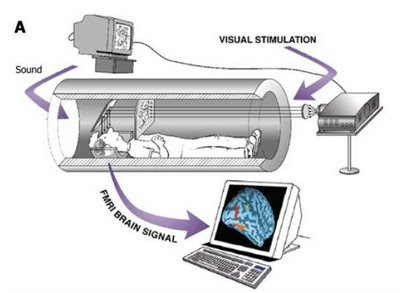 According to Hitchcock, the creation of suspense is brain surgery.
What prompted the study? According to an article appearing in Projections: The Journal for Movies and Mind,

“Throughout the years filmmakers have developed an arsenal of cinematic devices (e.g., montage,1 continuity editing, close-up) to direct viewers’ minds during movie watching. ... While the idea that movies can have a tight grip on viewers’ minds has been acknowledged since the early days of cinema, until the advent of non-invasive neuro imaging methods in the early nineties there was no way to penetrate a viewer’s mind and record his or her mental states while watching a movie.”

Hitchcock was one of the 20th century’s greatest practitioners of such “mind-directing.” He once declared to Francois Truffaut that he was more than a film director, that he was instead an audience director; regarding his work on Psycho, he said he was “playing [the audience] like an organ.”

As the Scienceblogs.com article goes on to say,

“The fact that Hitchcock was able to orchestrate the responses of so many different brain regions, turning them on and off at the same time across all viewers, may provide neuroscientific evidence for his notoriously famous ability to master and manipulate viewers' minds. Hitchcock often liked to tell interviewers that for him "creation is based on an exact science of audience reactions.”

Once again, Hitchcock proved to be far ahead of his time.

Thanks to my colleague Ken Mogg, author of The Alfred Hitchcock Story, for calling attention to this on his Hitchcock scholars’ blog.
Alfred Hitchcock Film Philosophy Film Studies Psychology

Millie said…
This is absolutely fascinating!

Hitchcock is my favorite director and I annoy people all the time by talking about him, constantly. Now, I have something else to share. :-D
February 12, 2009 at 8:18 PM