"The Trouble with Harry": Hitchcock’s Vision of the Ideal Society 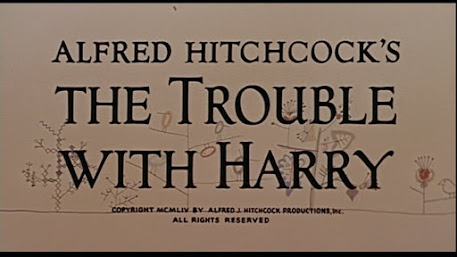 New Yorker cartoonist Saul Steinberg created this title sequence. In fact, the whole film reminds me of that magazine.
Alfred Hitchcock’s films point up the darker side of humanity. And I’m talking about what's left after you take out the horror elements. It’s a world in which any resolution is provisional and tenuous at best. Think of Rear Window. L.B. Jeffries and Lisa Fremont (James Stewart and Grace Kelly) have deep character flaws that prevent them from achieving true union. Yet, for all of the trials that they endure, by the film’s end, they’ve only bridged that chasm by inches. So the question arises: what, in Hitchcock’s view, is an ideal world? The answer can be found in The Trouble with Harry. This film represents Hitchcock’s vision of an ideal society. In his 1988 book “The Hitchcock Romance,” Lesley Brill observed that Harry stands in for “the essential dream that nourishes Hitchcock's work as a whole ... [of] a life in which human beings are complete and fulfilled, justice prevails without the rigidity and inaccuracy of law, and the world and its inhabitants live in harmony retrieved from the corruptions of experience.” 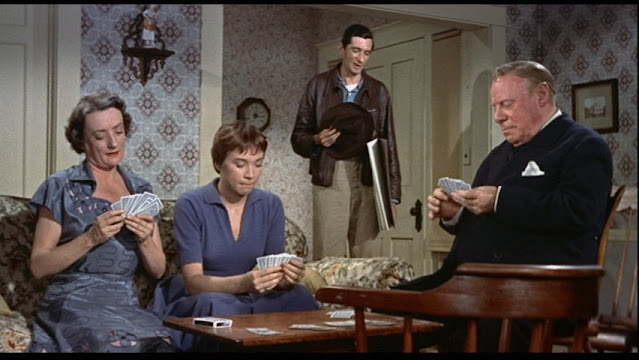 Deputy Sheriff Calvin Wiggs (standing) is no match for even these hapless would-be non-murderers.

Notice that this ideal society is not perfect. In my view, it’s better than perfect. It’s a society whose imperfections are part of the ideal. Think of it as the brighter side of Machiavelli’s maxim that “the end justifies the means.” Brill’s quote was brought back to mind for me by fellow Hitchcock geek Ken Mogg, who, on his MacGuffin blog adds, “That's just about perfect, once we see that Hitchcock is also reminding us of our frailty and pretensions, which are constantly represented in Harry (e.g., by the characters' frequent resort to lies, mainly quite small ones).” 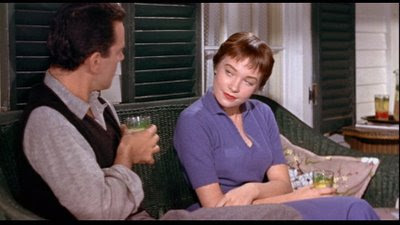 Forget everything you know about Shirley MacLaine. Back in the day, she was a hottie.

In a way, Harry is about grace in the face of horror. As the characters in the film encounter the corpse, Harry Warp, each imagines him- or herself to be responsible for his death. Captain Wiles (Edmund Gwenn), for instance, thinks he may have shot him in a hunting accident, while Jennifer Rogers (the lucsiously kissable Shirley Maclaine) believes she killed him when she struck him over the head with a milk bottle. Yet, in all of this, the townspeople accept each other for what they are, seeing themselves in the others’ humanity and empathizing with their various predicaments. After all, they seem to agree, there are more important things in life than death. That’s why no one gets bent out of shape over Harry’s demise as they gladly and repeatedly disinter his body. 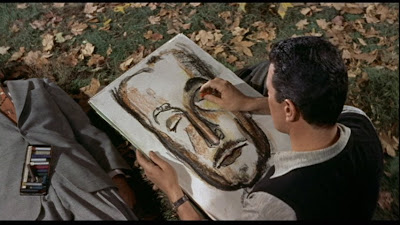 The face of death.

Mogg also notes Schopenhauer’s description of “the good character [who] lives in an eternal world that is homogeneous with his own true being. [Other people] are not non-I for him, but an ‘I once more’”. In other words, the Protestant saying “there but for the grace of God go I” is supplanted by the (I think) nobler and simpler “there go I”—regardless of the person being considered. The lesson of Harry is that we are all the other person—regardless of how “good” or “evil” that person may be perceived to be. This pastoral film sits naturally alongside Hitch’s 1943 Shadow of a Doubt. The common bond of mankind—for better or worse—is one of that film's themes, as well. Uncle Charlie (Joseph Cotten) is the secret sharer, the metaphysical double to his niece Young Charlie (Teresa Wright). At first, she warms to this connection, but as the truth comes out and it is revealed that he is the Merry Widow Murderer, she recoils in horror. Nevertheless, their bond remains, just as Uncle Charlie said, “Were like twins.... You said yourself we're no ordinary uncle and niece, no matter what I've done.” Later, one of the townspeople says, “We feel you're one of us.” It's true—though we may be loathe to admit it.

Both of these movies consider what happens when evil is injected into an idyllic community. The inhabitants of Shadow weren’t, it seems, up to the task of dealing with evil. When Uncle Charlie comes to visit the sleepy town of Santa Rosa, they embrace him — but only on his pretext that he is an innocent man. Their acceptance of him is predicated on their naivete. For the Vermonter inhabitants of Harry, however, the opposite is true. Their acceptance of the evil in their midst was based on knowingness. They easily, even gleefully, each confess to having murdered Harry in his or her own way. Perhaps it is that confessional attitude that redeems them. They see the evil that is in the world and accept it right along with the good.

The movie seems to say that, whether by murder, accident or natural causes, we're all going to die, so why get wrapped up the particulars? As Jennifer Rogers says, “That’s just life, I guess!”

I had never thought of "TTWH" in this way before.

Although, I have always loved this movie, I can never understand why people say it's boring or "one of Hitchcock's mistakes" (as if he ever made one...)! I personally think it's just wonderful!
May 27, 2009 at 4:23 PM

Thanks for stopping by. I think TTWH underappreciated because it departs so much from what you expect Hitchcock to be. There is no psych killer or other diabolical character - though one could say that Sam Marlowe cuts a rather dark profile....
May 27, 2009 at 9:13 PM

Millie said…
Yes, that's definitely true, it does do some departing.

But, it is also completely Hitchcock. You can see him all over it!

Joel Gunz said…
Yeah, I think it's quintessential Hitchcock. Like "Marnie", I don't think you can be a true Hitchcock fan and not dig this movie. (I'm only half joking...) I haven't heard it desfribed as a return to "vintage", but I'd agree now that you say it. So many of his earlier films had very little "suspense" - "The Manxman" and "The Ring" come to mind.
May 27, 2009 at 10:06 PM

Hitchcock didn't NEED the suspense. Of course he WAS the master of it (obviously), but he could still make a fabulous film without any suspense whatsoever!

Joel Gunz said…
Definitely. There's a list of least favorite films that includes "Smith", "Harry", "Marnie" and "Topaz". But I like them all. Carole Lombard was a hoot! And she was one of the handful of gorgeous women whi "got" Hitch!
May 27, 2009 at 11:13 PM

Swikan said…
I really enjoyed reading that. I hadn't thought about TTwH that way before either.

Meredith said…
ttwh is such an enjoyable film,and along with everyone else i'd never thought of it in this way. wonderful.
May 29, 2009 at 3:33 PM

Juliette said…
I'm not a great fan of Shirley McLaine - too bland but you men seem hooked! Rather like 'Marnie' this isn't one of my least favourite, on the contrary I enjoy the contrasts and deviance from the regular Hitchcock formular.