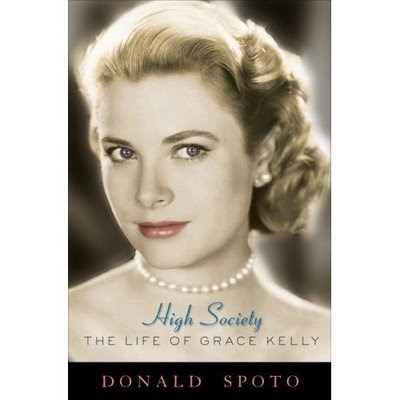 Ex-monk-cum-celebrity historian Donald Spoto just doesn’t seem to get it. True, he’s a bona fide expert on Hitchcock’s movies. But when it comes to writing about Alfred Hitchcock the man, this serial biographer ought to have his laptop slammed shut on his fingers. As I mentioned in an Oregonian review of his recent smear-ography of the director, "Spellbound by Beauty," Spoto’s "scornful language, inflated with innuendo... reveals more about the biographer’s biases and character tics than it does those of the Master of the Suspense."

Well, he’s at it again. The man once described in the London Guardian as a "quasi-academic gossipmonger" has singled out another movie icon. With "High Society: Grace Kelly and Hollywood" he again apparently misses the mark, this time swinging his moral gavel the other way. As Antonia Quirke put it in her book review in yesterday’s London Sunday Times, "This supremely reverential biography reads like something written by one of her courtiers. The author bows low before his subject while telling his tale." Despite Kelly’s well-known reputation as a Hollywood vixen (her many affairs are well-reported on), Spoto "appears entirely preoccupied with defending his subject’s honour."
Though I’ve yet to receive my trade edition of the book, I’m SO not surprised. That bias is alive and well in "Spellbound by Beauty." For instance he devotes six pages to glorifying the volunteerism of actress Madeleine Carroll (The 39 Steps, Secret Agent), revealing that she "invariably refused requests for interviews and worked tirelessly for the poverty-stricken children of the world until her death... [finding her] fulfillment neither in fame nor wealth but in her dedication to the needs of the wounded, the sick and the orphans of war." All true, no doubt. But why is my gag reflex kicking in? Maybe because, pages earlier, he reveals the agenda of his book, promising to tell in the life story of Hitch a "cautionary tale of what can wrong in any life." Spare me the parables, Donald. I think you’re just jealous.
Advance materials for "High Society" promise to set the story straight regarding "wild allegations about the number of... sexual partners" that Grace Kelly is said to have enjoyed. What a disappointment. I would hope that even more exploits would be revealed. Instead, we are treated to Spoto’s special brand of historical purification. As the Sunday Times review says, "Grace liked being kissed by men very much indeed. Which is a slight problem for Spoto," who would rather tell a story leading to—what, for this former cleric? Canonization?
You can’t fault Spoto’s research. It’s usually deep and thorough. If only the conclusions he draws from it were as well considered. As a judge of human character, he blows either hot or cold, righteously "defending the honor" of one person, while self-righteously flogging the memory of another, leaving one to suspect that the truth lies somewhere in the middle.
This pattern of idealization/devaluation reveals more about Spoto’s psychology than that of his biographical subjects. Come to think of it, such a bifurcated attitude is common among individuals with disowned or repressed rage and is associated with borderline pathology. Of course, I’m not saying that Donald Spoto has a personality disorder. How could I pathologize someone I’ve never met? I’ll leave that to his biographers.
Alfred Hitchcock Classic Film Donald Spoto Film History Film Studies Grace Kelly

Melissa @ I Pick Pretty said…
Oh, dear. Actually, I believe this same author wrote a bio on that other honorary American royal, Jackie Kennedy Onassis. I had the same problem reading that one; far too reverential.
June 9, 2009 at 7:37 AM

Jim McDevitt said…
This is a spot on description of Spoto's work. He's extremely knowledgeable about Hitchcock's films, but he goes too far in his characterizations of people. His research is voluminous, and he hides behind it when he draws these outrageous conclusions. He's an entertaining writer, but he's reached the point where it's difficult to take him seriously.
June 9, 2009 at 7:45 AM

Joel Gunz said…
Hi LegallyBlonde and Jim - Thanks for the comments! It almost seems as if Spoto isn't satisfied with mere credibility, doesn't it? Weird.
June 9, 2009 at 9:11 AM

Secondly, if "Alfred Hitchcock Presents" The Greatest Monster of Them All (1961) ain't based/inspired, though vastly fictionalized, by Ed Wood's work/life well then.....give me Prozac and call moi normal.

Crowley said…
Congratulations for your blog. It's amazing and very interesting. I'm going to join it and link it of you don't mind in my spanish cinema blog. I invite you to visit it if you have time.
Sorry for my English.
See you
We'll read each other
July 19, 2009 at 11:45 AM

BMCMajor said…
I can get the smut and rumors anywhere. Personlly I find it refreshing to have someone treat their subject with respect and not need to sensationalize it to sell books. Nice job Mr. Spoto.
December 11, 2009 at 7:02 AM