"The 39 Steps": Birth of the Modern Spy Thriller 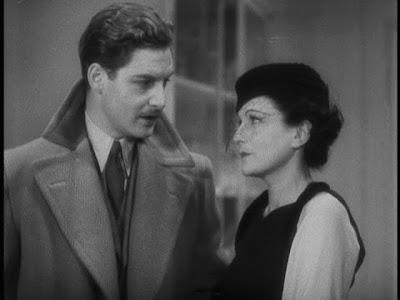 At first, Richard Hannay (Robert Donat) is skeptical about his guest's spy story. In The 39 Steps, mistrust is transmitted from one character to the next like a December flu bug.
Richard Hannay, hero of Alfred Hitchcock's The 39 Steps was the first of a long line of screen characters whose personal lives got tangled up with a sophisticated demimonde of spies, duplicitous cops and cutthroats.

All the elements of a Bond film are right there in the 1935 movie: the international intrigue, the individual hero living by his wits, the sex, the relentless suspense. The only difference is that James Bond was a professional spy, whereas Hannay was an amateur. Then again, in the novel, Hannay’s travels in Africa did prepare him to take on the task of pursuing and exposing these enemies of the state. Tellingly, Ian Fleming's original rough-and-tumble vision for Bond (more Daniel Craig, less Sean Connery) syncs most closely to novelist John Buchan's vision for Hannay.

Hitchcock's contribution to this new type of hero was to take Buchan’s idea and push it harder, front loading his film with sex and romance where there was none in the novel. But his admiration for Buchan went beyond that one movie. 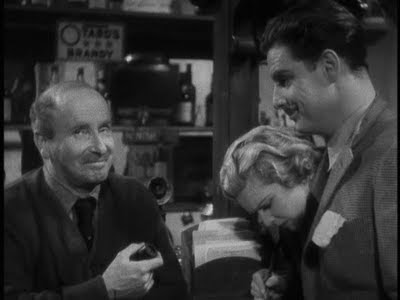 Handcuffed together, Hannay and Pamela (Madeleine Carroll) check into a hotel under the guise of lovestruck honeymooners. Pamela doesn't even exist in the novel.
Later films, such as his 1942 Saboteur and 1959 North by Northwest are practically remakes of The 39 Steps, including details that didn't make the final cut of the first movie. For instance, in the novel, Hannay is dogged by a menacing airplane—an idea that was, of course, finally realized in North by Northwest.

But the author’s touch went even deeper than that. Hitchcock once told Francois Truffaut that “Buchan was a strong influence a long time before I undertook “The 39 Steps”.... What I find appealing in Buchan’s work is his understatement of highly dramatic ideas.” Hitchcock was a huge Buchan fan, and many of his recurring themes were first worked out by the novelist.

Check back tomorrow and I'll tell you about a few of them. 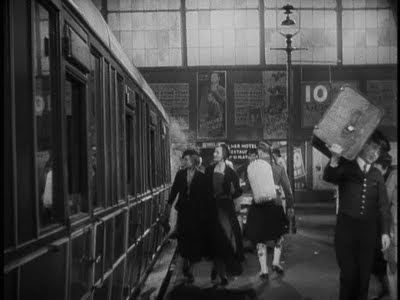 A scene in a train station early in the film. Look closely above the heads of the two women and you'll see a poster advertising Hitchcock's The Man Who Knew Too Much, released the previous year.
Alfred Hitchcock Film History Film Studies Joel Gunz John Buchan The 39 Steps The Man Who Knew too Much (1934)

Ricardo Cantoral said…
As a Bond fan I must comment that you are dead on with 39 STEPS having simularities to Bond films. Both NOTORIOUS and NORTH BY NORTHWEST are also in the style of Bond films. As matter of fact Hitch was going to be asked, or possibly was approached, to direct THUNDERBALL in 1961 or '62.Personally I could see Hitch directing a loyal adaptation of Moonraker, that would have been fantastic.
October 7, 2009 at 10:49 AM

Thanks for stopping by! Although it has been rumored otherwise, Hitch was never given the opportunity to do a Bond movie.

Your comments got me thinking... watch this space for a full-on response!

Steve Pafford said…
Thanks so much for this. Your site is superb and a great inspiration when I wrote this: