Why Alfred Hitchcock's "The 39 Steps" Matters 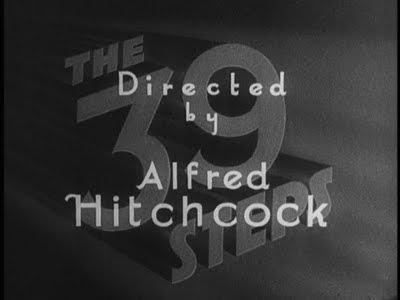 Alfred Hitchcock liked to say that he enjoyed reading novels with “multiple chases and a lot of psychology.” When he read John Buchan’s novel, The Thirty-Nine Steps, he liked it so much he decided to make a movie out of it, reducing the title to a space-saving numeric figure: The 39 Steps.

When the film came out in 1935, Hitchcock did not merely have a hit. He’d turned a page in history. A new cinematic genre was born: the psychological spy thriller—a double chase in which a lone everyman pursues his enemies while fleeing his enemies and the authorities. 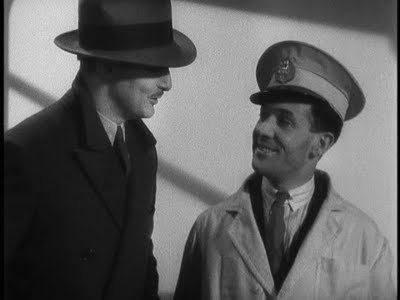 When seeking help, Richard Hannay (Robert Donat) first tells the milkman that he's mixed up in a spy plot. The milkman laughs in disbelief and only agrees to assist Hannay when he changes his story, "confessing" that he's actually having an affair with a woman in the building and needs to make a discreet exit. 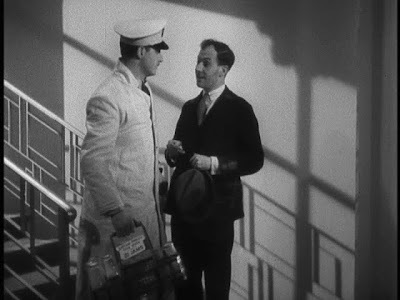 At that, Hannay dons the first of several disguises in the movie.
Thanks to Buchan and Hitchcock, we can look at literature and film history this way: in the beginning there was Richard Hannay, hero of The 39 Steps. Later, out of that mold, there came such iconic characters as James Bond and James Bourne of Robert Ludlum's The Bourne Identity franchise.

The foreword to the Dover edition of the book tells us that John Buchan “found the exact recipe for an emerging genre and created a perfect [example] of the type,” adding that such novelists as “Eric Ambler, Ian Fleming and John Le Carré all owe a debt to this book.”

By selecting this novel for his next project Hitchcock demonstrated what always seemed to be true with him: that part of his genius lay in keeping a step or two ahead of the curve. 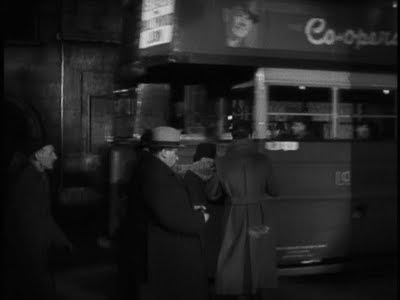 For his cameo, Hitchcock takes a turn as a common theater-goer, tossing his ticket into the gutter just moments after, perhaps, participating in a raucous scene at the Music Hall vaudeville theater.
What makes Richard Hannay such a great prototype for the “modern spy novel”? Tune in tomorrow.
Alfred Hitchcock Film Criticism Film History Film Studies Joel Gunz John Buchan The 39 Steps

Anonymous said…
Yeah, I had always heard that the style of film that North by Northwest was what influenced Terence Young and the first few 007 movies - especially the helicopter swooping in From Russia with Love - clearly inspired by the plane in North by Northwest, in turn, inspired by The 39 Steps. Strange that Fleming himself was inspired by Buchan's novel - the criss-crossing of film and literature always fascinates me.
August 26, 2009 at 6:57 AM

Absolutely! One of the debates in the Hitchcock studies world is whether "From Russia With Love" is an homage or a ripoff! SO many Hitch references in that flick. What do you think?
August 26, 2009 at 11:51 AM

Anonymous said…
Off the top of my head I reckon its a bit of both. With James Bond films, the reason they have spawned a long-running franchise and been as successful as they are is because they use the current trend in spy/action/whatever-genre-is-the-craze and, effectively, adapt it to suit James Bond. So 'From Russia...' inspired by Hitchcock, 'Moonraker' (1979) (note that in Flemings novel he doesnt go to space) was inspired by the space-craze post-Star-Wars of '77 and then the new films, Casino Royale/Quantum of Solace is digging into the the character moreso akin to the Bourne films. I wouldn't be suprised if you could go through each and every Bond film and choose what films of the same period inspired it. Its what keeps bond up-to-date and keeps the franchise moving.
August 27, 2009 at 5:30 AM

Joel Gunz said…
Wow - Fascinating overview and ideas there! Still, it seems you can't pop a video into your machine anymore without seeing Hitchcock references like easter eggs - from TV's Dexter and Monk to the Simpsons and beyond....
August 27, 2009 at 11:39 AM