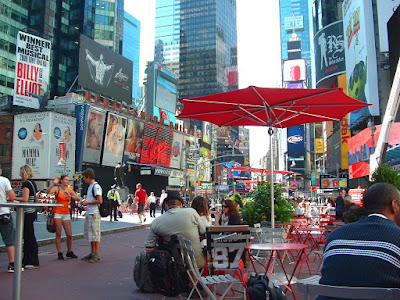 Times Square: a Disney-fied version of its former self. Not that that's a bad thing, I guess.
All photos by Max Gunz.
Little known New York fact: Except for the Winter Garden Theater (now showing: Mamma Mia!), not a single Broadway theater actually has an address on Broadway. What of the other 39 playhouses? Those 500+ seat venues actually occupy adjacent side streets.

I don’t know why it worked out that way. But after two days there, I can attest that Broadway’s sidewalks are crowded enough. The last thing they need is more lines like the (well-behaved) mob of hundreds of vacationing dental assistants from Omaha waiting in line to hear the live version of “Voulez Vous.”

Last week, as promised, I dropped in on the City and paid a visit to the Broadway production of The 39 Steps, leading its September 1 after-show discussion Talkback Tuesday.

Before the show, my son Max and I wandered about the theater district gawking at the tourists in Times Square and then hoofed it down to the Flatiron District for a brief stop-'n'-chat with Web guru and Director of eROI’s New York office, Chris Masagatani. Afterward, Max and I nearly crashed face-first into the street, having succumbed to jet lag and the reality that our redeye flight had kept us up for 40 hours straight.

Stumbling back to our hotel, we encountered a sandwich-board marketeer in Times Square promoting that night’s play and Talkback Tuesday. When I asked her who was leading the discussion that night, she said, I kid you not, “This amazing Alfred Hitchcock geek named Joel Gunz!” 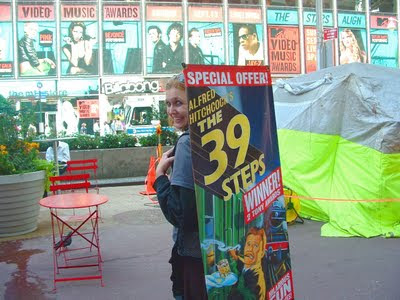 Dawn, who moved to the New York to become an actress, had been prepped on that night's Talkback Tuesday lineup.
Hello Big Apple! They’re talking about me in Times Square! In a good way! 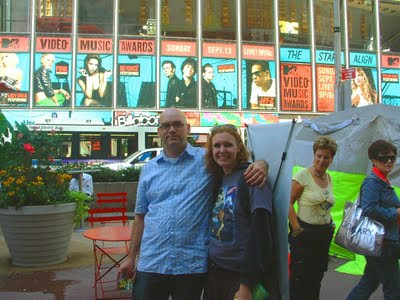 And so, with the first sweet taste of fame lingering in our otherwise exhausted mouths, we trudged back to the hotel for a quick nap before showtime.