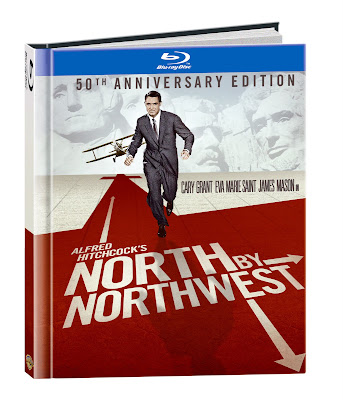 Newly remastered -- and you can win one from me!
As you may know by now, 2009 marks the 50th anniversary of Alfred Hitchcock's North by Northwest. So Warner Home video has arranged for a restoration of the film, releasing a DVD, as well as a Blu-Ray version, the first Hitchcock film yet to get this state-of-the-art video treatment.

In addition to returning DVD features, like a documentary hosted by Eva Marie saint, two new documentaries have been produced: "The Master’s Touch: Hitchcock’s Signature Style" and "North by Northwest: One for the Ages."

It looks like an excellent addition to any Hitchcock Geek's video collection.

How to win a free DVD.
I got my copy, and now you can get yours. The producers have made a couple of extra copies available to me to pass on to you. To get a chance at one of them, all I ask is that you help promote my blog. So I'm running a little contest. Here's how it works:

2. This Friday, November 27, #FollowFriday (#FF) me, as many times as you'd like. Be sure to include both my Twitter handle and my blog url (or the shortened version). 3. Whoever encourages the most people to follow me on Twitter will get their own copy of North by Northwest free! (I'll even pay postage.)

Last week, @carlotta_valdes won. Maybe this week, it'll be you!

Anonymous said…
the blu-ray looks incredible. the restoration is so spectacular and it's wonderful having all the specialties after having to endure with just the old snap case DVD. every Hitch fan must own this!!
November 24, 2009 at 12:28 PM

Ténèbres à la lumière... said…
Hi! Joel,
I too will see if I can get the word out to other Twitter users about your contest.

By the way, that Blu-ray
copy of Hitchcock's North by Northwest will be on my Christmas list too!