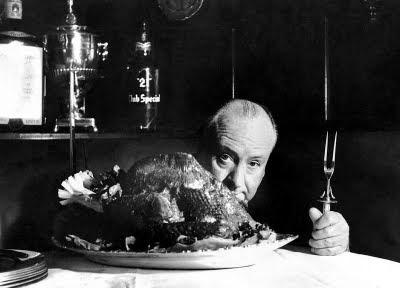 In 1956, Hitch posed for this picture at his favorite New York restaurant, the 21 Club. (He even gave the famed eatery a role in Spellbound.) Photo by John Rawlings
You could say Hitch was a man of many appetites. An old school gourmand, he served guests -- and himself -- more-than-ample portions from his well-stocked wine cellar (he loved Burgundy in particular) and aged beef flown in from England.

Once, on the set of The Birds, he advised 12-year-old actress Veronica Cartwright, who played the film's Cathy Brenner, on the proper way to broil a steak. He also gave her meticulous instructions regarding wine selection, right down to the best distributor to choose. (It's in Bristol, England.) She apparently never deviated from his wise counsel. I wouldn't, either -- would you?

Getting back to the picture above. Ogden Nash liked it so much he wrote the following poem:

Pick a Hitchcock of opulence rather than corpulence,
just pleasingly plump, with a snug silhouette,
To embellish the board when the places are set.
For the ultimate test, more closely examine it.
The Hitchcock Supreme has a wide streak of ham in it.

ratatouille's archives said…
Hi! Joel,
That is a photograph of director Alfred Hitchcock, that I have never seen neither.
Thanks for sharing not only the photograph, but also all the "tidbits" about him (Alfred Hitchcock) in your post.
Once again, I hope that you and your family had a good one!
Take care!
DeeDee ;-D
November 26, 2009 at 12:29 PM

Anonymous said…
While there are a few hours of holiday remaining, be sure to check out Hitch's appearance on "Vincent Price's (1958) Thanksgiving Special," courtesy SNL.

As a matter of fact, I just featured this card along with seven other cards from the same set on my blog in August.