Inglourious Saboteurs: Tarantino Rips a Page from the Hitchcock Playbook

Posted by Elisabeth Karlin on December 07, 2010
Take a look at this post from the assistant moderator of the Alfred Hitchcock Geek Facebook fan page, Elisabeth Karlin. It's the first of what I hope to be many more insightful blog items! -- J.G. 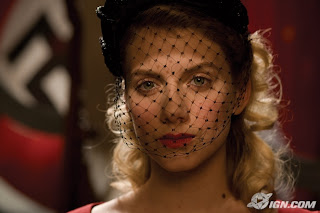 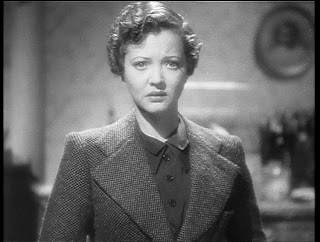 Alfred Hitchcock is easily the most quoted director in filmdom. Few other directors have not at one time or another cut a snippet from his playbook. Brian DiPalma draws on the Master so much that his oeuvre is a virtual glossary of the Hitchcock vocabulary.
At the other end of the spectrum, there's Quentin Tarantino -- the director who most likes to quote from filmmakers past. Yet, ironically, there's barely a whiff of Hitch among his acres of allusions. With Inglourious Basterds, Tarantino's 2009 epic of Nazis and Nazi killers, Hitchcock at last gets his due from the man who loves movies. And how.
Inglourious Basterds is a riot of vintage winks and nods to everything from The Battleship Potemkin to The Breakfast Club. But no film is as dramatically evoked as Hitchcock's 1936 Sabotage. Though some of these allusions might be open to interpretation, there is no doubt that Tarantino had Sabotage on the brain--he even treats us to a morsel of the film itself, the crucial scene of Stevie boarding the bus, to illustrate the dangers of combustible film. 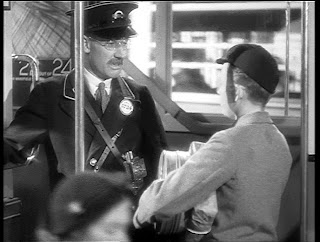 Beyond that very literal reference, the most compelling evidence of Tarantino's Hitchcockian frame of mind are the parallels between his heroine Shoshann Dreyfus (Melanie Laurent) and Sabotage's Mrs. Verloc (Sylvia Sidney.) Both women are proprietors of movie theaters and they share an air of plaintive sorrow, gravity and loneliness that comes from impossible grief. (Sabotage opened in the U.S. under the soapier but apt title of A Woman Alone)
Fearing for their own safety, Shoshanna and Mrs. Verloc, both saddled with major cases of survivor's guilt, must hide an enormous burden of anger heaped with anguish as they watch their enemies, Landa and Verloc, respectively, sit down to dine with audacious fussiness. Landa won't eat his strudel without cream and Verloc gripes about his brown vegetables.
While Shoshanna carefully plans her revenge, Mrs. Verloc seizes an impromptu but also murderous solution. Nevertheless, both stories barrel toward their inexorable conclusions amid similar moments of, shall we say, explosive, civic hoopla--Sabotage has its "Lord Mayor's Day" and Basterds has the premiere of "A Nation's Pride." They end in sabotage -- the fiery destruction of, in both cases, a movie theater.

In both films the movie theater is used as a cover for sabotage. The theaters themselves are embodiments of the Hitchcockian motif of shifting identities (as are many of the characters in both films.) And in both we are taken to the other side of the screen (the Verlocs actually live behind the screen.) The theatetr in Hitchcock has always been a place where we sit in the dark and face our anxiety so it is telling that it is behind the screen where, in both films, the explosions ignite and audiences are sent screaming and running for the exits.

In Sabotage a bomb in a birdcage goes off. In the film within the film of Basterds, Zoller demolishes his enemies from a structure known as a "bird's nest." And in a strange case of who's quoting who--Hitchcock gives us a clip of the disturbing cartoon "Who Killed Cock Robin?"--A sequence that comes off as quintessential Tarantino.
It's not only Sabotage that gets the Tarantino salute. Other Hitch references abound--a cigarette stubbed out in food (see To Catch a Thief), a glass of milk and an unrecognizable Rod Taylor (The Birds' Mitch Brenner to you) as Winston Churchill. And with Tarantino's sly penchant for cinematic name mash-ups (e.g. Emmanuelle Mimieux) it's hard not to consider Lt. Archie Hickox as a homonymous evocation of Hitch coupled with Cary Grant (nee Archie Leach.)

Finally, there's Basterd's strangling death scene of spectacular blonde Bridget Von Hammersmark. With the life being throttled out of her, she gropes helplessly with nothing in reach she can use to save herself. The writhing beautiful blonde with a cast on her leg becomes Grace Kelly and James Stewart rolled into one. Once Bridget is extinguished, her murderer goes to the telephone. As he picks up the receiver we see right next to the phone, there on the desk, a pair of scissors. And then he dials M.
Alfred Hitchcock Inglourious Basterds Quentin Tarantino Sabotage

Dorian Tenore-Bartilucci said…
Excellent piece about the Hitchcockian elements of INGLOURIOUS BASTERDS, especially the way you compared it with SABOTAGE. Ironically, I've heard from a few sources that Quentin Tarantino loathes Hitchcock movies! Is it possible that QT is a self-hating Hitchcock fan? :-)
December 13, 2010 at 12:10 PM

Dorian Tenore-Bartilucci said…
Excellent piece about the Hitchcockian elements of INGLOURIOUS BASTERDS, especially the way you compared it with SABOTAGE. Ironically, I've heard from a few sources that Quentin Tarantino loathes Hitchcock movies! Is it possible that QT is a self-hating Hitchcock fan? :-)
December 13, 2010 at 12:13 PM

I think sometimes directors are loathe to give others credit. Woody Allen disparaged Hitchcock around the time he was coming out with the oh-so-Hitchcockian POINT BREAK.

Jaime Grijalba said…
I loved this! Really well written and next time I see Inglourious Basterds I'll have an eye on those scenes.
December 13, 2010 at 4:14 PM

Hughes said…
I don't think W Allen did actually disparage Hitchcock. You know, I have a feeling you might be remembering something you read elsewhere on the web back some time after 'Match Point' was released .. when I (ahem!!) mis-remembered the event of Mike Leigh's disparaging of Hitchcock .. and, in my haste, I recklessly attributed the comments to Allen.
I am so so embarrassed at that! But as far as I know, W Allen has *always* expressed admiration for the great director.
December 14, 2010 at 9:13 AM

"The theatetr in Hitchcock has always been a place where we sit in the dark and face our anxiety so it is telling that it is behind the screen where, in both films, the explosions ignite and audiences are sent screaming and running for the exits."
December 14, 2010 at 10:57 AM

Joel Gunz said…
Right you are, Hughes! And you've sent me back to that discussion room, which is always a pleasure.

So, for the record, I withdraw my comment above about Woody Allen disparaging Hitch. (Though the point about some being miserly about giving credit stands.)
December 14, 2010 at 11:28 AM

Donnie said…
that was a great post! Whenever I hear that "two hits" line i always wonder if he was quoting the breakfast club on purpose.

simoncolumb said…
i love INGLOURIOUS BASTERDSA and never picked up on the hitchcock references - incredible insights there. Suffice to say, though I have watched SABOTEUR .. I have yet to watch SABOTAGE.

Doug's Blog said…
I am not the biggest Tarentino fan--my favorite movie if his is "Jackie Brown" but this review has got me interested in seeing the movie.
November 8, 2012 at 10:30 AM