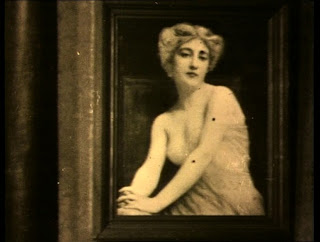 "It's more interesting to discover sex in a woman than to have it thrown at you." And so, Alfred Hitchcock branded the blonde for his own iconography in 1935 with Madeleine Carroll in The Thirty-Nine Steps. "Anything could happen with a woman like that in the back of a taxi" Hitch marveled, as he rejected more blatant sex objects as "vulgar and obvious. "

But there is more to Hitchcock's amorous interests than a string of unforgettable blondes. From 1925's The Pleasure Garden with its frenzied chorus girls on, Hitchcock has not skimped on purveying his own particular and most vivid eroticism.

That goes for eroticism in all its variations. Intrigued with homosexual love, Hitchcock portrayed it outwardly with Rope's Philip and Brandon; suggestively with Strangers on a Train's Bruno and Guy; and whimsically as in the sweet devotion of The Lady Vanishes' Caldicott and Charters. Lesbians came not just in the pathological shape of Rebecca's Mrs. "Danny" Danvers but also matter-of-factly with Suspicion's very out and proud mystery writer Isobel Sedbusk. 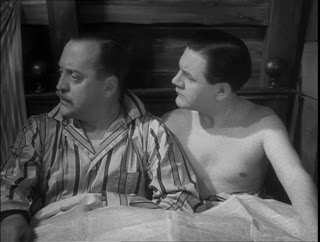 Censorship was no impediment for an artist as practiced in the veiled and sly as Hitchcock. His kisses, the conventional stand-ins for sexual consummation, were weighty with drama and character revelation. He gave us the loaded long take of Notorious, the crashing crescendo kiss of Vertigo and, my favorite--the open-mouthed, let's go down together lip-lock of Lifeboat.
In 1960 Hitch teased the censors and his audience with flashes of nudity in Psycho, yet when nudity was sanctioned in the Seventies, Hitchcock responded by making Frenzy, the least sexy of his movies. Frenzy had nudes but they were dead nudes. Sex in Frenzy is death-dealing and not much fun. There had always been an explicit sex-death connection in his films but in Frenzy Hitchcock did away with the heightened romantic aspect of that connection.
Frenzy is actually more concerned with that other great sensual pleasure--food. But despite the film's cornucopia of gastronomic metaphors, the food in Frenzy is inedible or downright disgusting. When a decent meal is served, it is frustratingly interrupted. In Frenzy, a film made by an old man back in a country he had left long ago, food and sex are pointedly unappetizing. 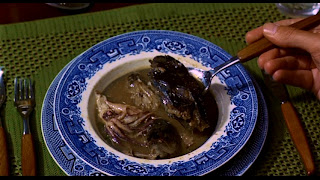 It was in 1964 that Hitchcock made his movie that was purely about sex--Marnie. The movie announces its intentions right from its audacious opening shot of a woman's purse. Filling the screen is a view of the purse, that with its folds and inner slit, bears a striking resemblance to a human vulva--labia majora, minora, pubic thatch and all. Then we see the back of the woman clutching the purse as she walks a deserted railroad platform between two standing trains. 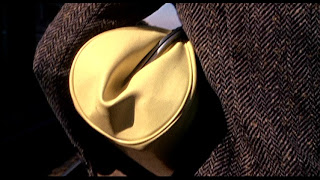 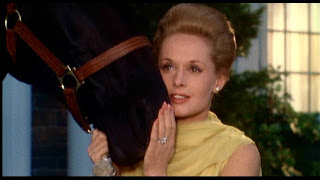