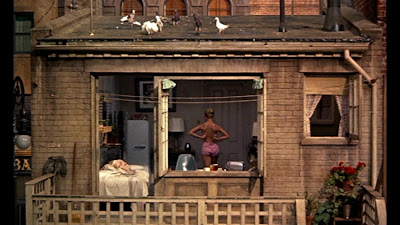 Among the array of cool blondes, available brunettes and the smattering of exotic types, who is the most lickerishly libidinous? She should be someone who actually has sex. We know North by Northwest's Eve Kendall is sexually active but it's a job. And for all the dizzying pheromones Kim Novak seems to shoot off, Vertigo's Judy Barton is driven by needs beyond sex. 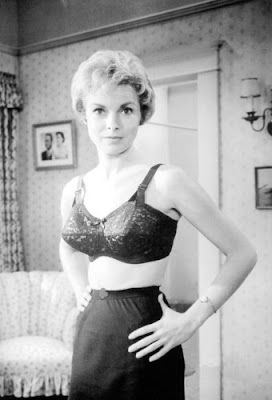 It's really not enough for the personification of eroticism to have sex, she must be hungry for it. Psycho's Marion Crane comes to us straight from Sam's sweaty sheets but she longs for marriage and respectability. Marion is not a woman dictated by her appetite (she eats like a bird.) Constance Porter in Lifeboat is experienced and willing (and God knows she's hungry) but her function is as brainy leader--more Athena than Aphrodite. The pan-sexual title character of Rebecca would fill the bill, were she alive and Rear Window's Miss Torso puts on a good show but she is all tease.To find the woman in Hitchcock who combines lust, hunger and just enough coarseness to wear it proudly, one must get on board the train to Metcalfe and look up Miriam Haines. Strangers on a Train's Miriam is far from the Grace Kelly mold of fine bones and subtlety. Teetering on the brink of frumpiness, she is the antithesis of a Hitchcock siren and yet he has assigned a stunning amount of allure to her. In the hours of one day, Miriam has loaded interactions with four different men--she has a heated argument with husband Guy, dates two young swains at once and flirts with a mysterious stranger. And that's not even including the man who impregnated her. She is voracious. 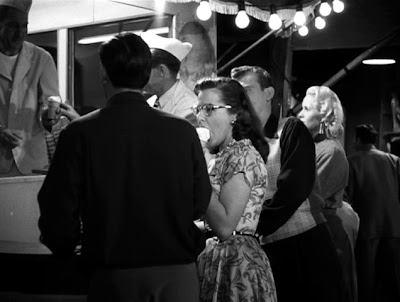 Somehow we are led to believe that by throwing over Miriam for Senator Morton's daughter Ann that Guy is trading up. Even Bruno chides "A slight improvement over Miriam, eh Guy?" But is she? In her limited amount of screen time, we see Miriam vamp, threaten, yell, laugh, sing and eat an ice cream cone with deep-throated devilishness. By contrast, we see Ann fret. Underscoring all this, actress Laura Elliot incarnates Miriam with her whole earthly body while Ruth Roman plays Ann hardly moving her tiny teeth.

Miriam might not be an easy person to like but Hitchcock manages to tenderize her along the way as she transforms from Guy's bully to Bruno's guileless and vulnerable victim. We see her ride her carousel horse, shyly eyeing the man who will put an end to her. To hear her sing the eerily prophetic lines of "Casey and the Strawberry Blonde"--His head was so loaded it nearly exploded, the poor girl she shaked with alarm--is to realize that we're all frail victims of our fate. And Miriam, was sadly, just too sexy to live.

Cynthia Fox-Giddens said…
The Hitchcock movie Strangers on a Train is one of my faves and I think you are spot on with the Miriam character. Great blog post!
February 17, 2011 at 1:49 PM

Elisabeth Karlin said…
Thanks Cynthia! I love the movie too--it is so rich in characters with one of the most compelling (and most stylish) villains in all of Hitchcock.
February 17, 2011 at 2:49 PM

moremiles said…
There is a lot of sexuality just beneath the surface in this movie. Miriam seems to be one of the most "human" of Hitch's ladies in that she is not in the mold of the blond ice "queens". She is quite believable & normal in her actions & desires. Bruno has a kind of fey attraction towards Guy that leaves you feeling uneasy as well. It is certainly a classic film in how it interacts with the characters & with the viewers.
February 17, 2011 at 10:16 PM

Elisabeth Karlin said…
So true moremiles, there is a lot of sexual attraction going on here. There's also the very cheerful flirtation between Ann's sister Barbara and the cop assigned to Guy.
February 18, 2011 at 6:28 AM

Yoga and Hitchcock said…
Wonderful article, worthy of the name Hitchcock Geek. As an aside, has anyone read the book Strangers on a Train? I read it recently. A significantly different plot, with some of the same characters. And a big disappontment after seeing the Hichcock film 5 or 6 times. Love that runaway carosel (which isn't in the book) which is of course a metaphor for runaway sexuality!
March 2, 2011 at 6:45 PM