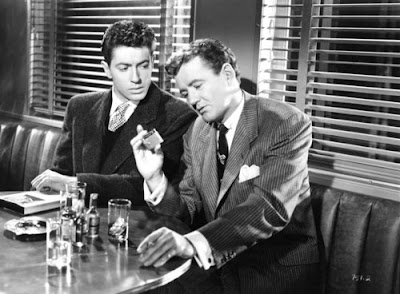 Beautiful Farley Granger died on March 27 in New York City. He was 85. As his obituaries have noted, Granger is best known for the two films he made with Alfred Hitchcock. Often dismissed as a kind of Montgomery Clift-Lite, Farley Granger was much more than a pretty face in the way he approached his work and how he lived his life.

Years before Granger proclaimed his own bi-sexuality, Hitchcock cast him in two roles that boldly crossed the lines of conventional sexuality. In 1948's Rope, Granger plays Phillip, the jumpier one of the murderous Leopold and Loeb-like couple. There is no doubt that Phillip and his partner in crime Brandon (John Dall) are homosexual. Along with, as screenwriter Arthur Laurents has confirmed, their mentor Ruper Cadell (James Stewart.) 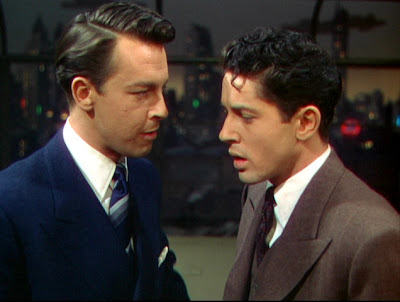 Seemingly dominated by the glib and guilt-free Brandon, it is Phillip who bears the weight of their deadly deed. Granger's Phillip is haunted and high strung. Rope, told in long takes and real time, has Granger start off at a pitch of high anxiety that he deftly portrays without sending the character over the scenery-chewing top. He even manages to inject the story with welcome humor as he unravels.

The homosexuality in Rope is never commented on, it just is. The characters are matter-of-factly gay. They happen to be gay just as they happen to be white New Yorkers. So even though Rope is populated with gay characters, it is actually Granger's second film with Hitchcock that digs down deep into Hitchcock's fascination with homosexuality.

1951's Strangers on a Train is veiled where Rope is clear, but it is drenched in the heady brew of magnetic attraction and passion that can bubble between two of the same sex. Rope's got homosexuals in it but Strangers' has homosexuality oozing out of it. Again Granger, as tennis player Guy Haines, is dominated by a more knowing and dangerous associate. This time it is in the formidable figure of Robert Walker's Bruno Anthony. And again, Granger is a vulnerable but worthy match.

As Guy is pulled into Bruno's subversive world, he not only finds himself to be the love object of a madman but he discovers that this devil is capable of bringing fantasies to life. One fantasy, the death of his wife Miriam, is apparent. The other fantasy is never stated but it shadows every scene between the two men.

Guy's ostensible romance with Ann Morton fades to an afterthought as his link to Bruno has them bewitching, bothering and bewildering each other all the way to the climax on a crazy carousel. The depth of Guy's conflicted feelings comes to full light in the scene of Senator Morton's party. After Bruno has nearly strangled one of the guests, he is seen prostrate on a settee--most scenes seem to find Bruno in a state of post-coital languor. Guy tells him to leave him alone and in the next moment he pulls Bruno to his feet, then he punches him back down off his feet and then he pulls him back up again and straightens Bruno's shirt and tie like a good wife. The push-pull, I love you-I hate you actions of Guy tell us that the attachment of these two is until death do them part. And Farley Granger plays it with unstinting conviction. 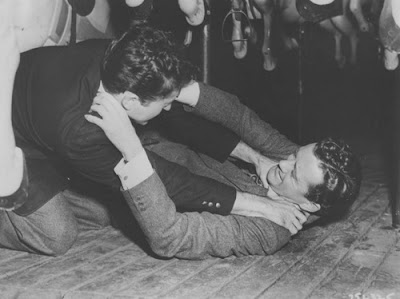 At the height of his career, Farley Granger turned his back on Hollywood and headed to New York for theatre. "Hollywood was never a place for me. The stage was magic." Farley knew what was for him and didn't care what anybody thought about it. After years of relationships with illustrious men and women (Ava Gardner, Leonard Bernstein and Arthur Laurents among them) he eventually came right out and said "I've lived the greater part of my life with a man so obviously that is the most satisfying."

Together, Farley Granger and Alfred Hitchcock got a different kind of love up on the screen and into the public consciousness. Long may they live there.

ratatouille's archives said…
"1951's Strangers on a Train is veiled where Rope is clear, but it is drenched in the heady brew of magnetic attraction and passion that can bubble between two of the same sex."

With the British version Of "Strangers on a Train" being just a little more unveiled than the American version.

By the way, the double disc is currently, the best version to own...Well, that is until it's available on Blu-ray.

Hello! Elisabeth Karlin...
This is a very well-written, a very fascinating, a very detailed, and no-hold bar review about the late actor Farley Granger, in Hitchcock's "Strangers On a Train." (Which is one Of my favorite Of Hitchcock's films....)

Thank you for your comment. It's one of my favorites too (though I admit to a whole lot of favorites.)"Strangers on a Train" is so rich and dark. It's like chocolate.

DorianTB said…
Elisabeth, Joel, I loved your absorbing, affectionate tribute to the late, great Farley Granger. Although ROPE had its flaws, the performances by all concerned, especially Granger and John Dall, were excellent. Wish I'd had a chance to see Granger perform onstage in DEATHTRAP, among others. I've always felt he wasn't quite as appreciated as he deserved to be. In particular, I would have loved to see Granger, Robert Walker, and Patricia Hitchcock get Oscar nominations for their superb performances in STRANGERS ON A TRAIN. Oh well, this great film will just have to settle for being a cinema classic instead! :-)
April 3, 2011 at 4:36 PM

Juliette said…
I own both movies in a Hitchcock collection but have watched neither..but now look forward to both with anticipation, thank you all.
April 30, 2011 at 12:20 PM