Anthony Hopkins' Hitchcock: I need you to be Alfred one more time. 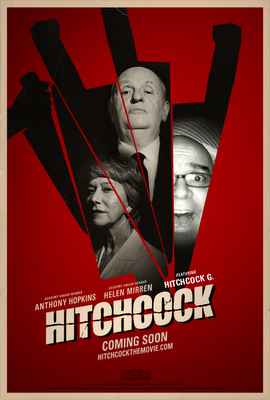 “Like all great artists, Alfred Hitchcock is impossible to live with, but well worth the effort.” So says one of the characters in the eagerly anticipated Hitchcock (Fox/Searchlight), which both sums up the main point of the film and explains why I recently found my bags packed and on the porch. Apparently, I’m not the artist I thought I was.

That was a maudlin thought. Then again, Hitchcock is rife with maudlin humor and asides--along with enough Easter egg-like in-jokes to keep Hitchcock fans and re-watching the film for years. For instance, in a line borrowed from one of the final scenes in Vertigo, Whitfield Cook (Danny Huston) invites Alma to join him for “one of those big juicy steaks we love so much.”

The first-ever legitimate biopic (or is it docudrama?) about the director, Hitchcock prudently avoids a career-spanning flyover of his half century in movies and focuses instead on the obstacles he faced just to make one film: Psycho. But don’t let that limited scope fool you. Restricting the story to just a few months between 1959 and 1960 allowed director Sacha Gervasi and screenwriter John J. McLaughlin ample room to explore the complicated relationships that existed between Hitch and Alma and Hitch and his leading ladies, while also comparing the dark corners of his psyche with the entertainments he brought to generations of audiences. History was provided by Stephen Rebello's excellent and readable book Alfred Hitchcock and the Making of Psycho.

Gervasi pulls out a variety of tricks to get those ideas across without resorting to dry exposition. In a series of imaginary sequences, real-life serial killer Ed Gein (Michael Wincott) and inspiration behind novelist Robert Bloch’s Norman Bates, plays Hitch’s muse, confidant, psychotherapist and Jungian shadow. Such fantasy scenes (fantascenes?) were a bit fresher when Tony Soprano first engaged in them, but here they show us what we suspected all along--that Hitch, ever the good Catholic, loved his murderers as he did himself.

Hitchcock isn't a term paper, it's a movie. The creators don't shy away from creative license in order to get the all-too-true story across. For example, Hitchcock was always famously cool on the set, and for the filming of the shower scene in particular, Janet Leigh recalled, “it went very professionally and very quickly.” Suffice it to say that in this movie, Hitch steps in and proves to be a real cut-up. What we lose in historical accuracy, we gain in further insight into Hitch's creative rage.

In a later scene, at Psycho's premier, Hitch pretends to direct the audience as if it were an orchestra. Untethered from historical facts, the scene reveals what the real payoff was for Hitch, who spent 50 years hiding  in the dark behind a camera. Moments like this were what Hitch lived for.

When you realize that Anthony Hopkins himself played Hannibal Lechter, the screen’s second-most beloved serial killer, it follows that he was an inspired choice to play Hitch. (Hell, Hopkins could have played Alma if he’d wanted to.) And he brought a sense of Hitch’s troubled nature to the role. But I do have a beef. Like Toby Jones’ portrayal of Hitch in The Girl, Hopkins’ Hitchcock is based on Hitchcock’s public persona, with all the black humor and droll imperiousness unwaveringly in place. (At least in HBO's bio-waste The Girl, we get to hear a few of Hitch's classic, filthy limericks. I took notes.) In this new film, Hopkins' Hitch is either the Buddha of Deadpan or he’s a ravenous, knife-wielding glutton.

In preparation for the role, Hopkins admitted the he “watched a lot of "Alfred Hitchcock Presents" episodes. That was his first mistake. And that prosthetic fat-man makeup didn't make his job easier. But the real Alfred Hitchcock, the one I’d hoped to glimpse, at least in the scenes he shares in private with his closest confidants, was in fact a spirited raconteur, quick with a smile, whose eyes—as with those of his characters—revealed everything, as this interview shows.

For me, the show-stopper was Helen Mirren, who serves up an Alma Hitchcock who’s cunning, resolute and funny—and who knew the score all too well as the loyal wife who lived in the shadow of her famous husband’s fantasy mistresses, without losing herself along the way. If Hitchcock gets a Best Picture Oscar where the master’s films always came up short, in order to complete the symmetry, Mirren ought to receive a Best Supporting Role where Alma never did.

Alfred Hitchcock lived to make movies. The story of his films cannot be separated from his life—and the converse is true as well. For film lovers in general along with casual fans and hard core Hitchcock Geeks, Hitchcock has a little something for everyone.

MOT said…
Thanks for the objective review, Joel. I'm guessing that "Hitchcock" may get Oscar nominations but from the reviews I've read I think best picture is a long shot, and the consensus seems to be that using Gein as a muse didn't really work. But from what I understand that only amounts to about 15 minutes, so it didn't appear to totally derail the film, and overall the film sounds like it is entertaining, probably moreso for Hitchphiles like us.

Side note: When I heard that this would be the first dramatic film for director Gervasi, I was a bit concerned as all I knew about him was his having done the "Anvil" documentary. But today I was watching Spielberg's "The Terminal" which starred Tom Hanks, and was surprised to see Gervasi was credited as one of the two screenwriters. This raised my confidence level for his work on "Hitchcock".
November 21, 2012 at 11:13 PM

Doug's Blog said…
Just getting a well-made movie about "Hitch" in wide release will only improve his already high market value and maybe add some more younger fans to see more of his pre-1960 work. It's a win-win all around.
Sorry to hear about your own domestic situation. Best wishes Joel.

Page said…
This is the one film I've looked forward to seeing all year and I'm so glad I was able to read your review first as it was the one review of the film I had been waiting on.

I truly enjoyed your honest take on the film and pointing out the little moments in the film that I might have missed. I also appreciate your candor in pointing out things the film should have touched upon but didn't.

Perhaps I'm alone but I feel Johannson wasn't the perfect choice to play Janet Leigh. I know the actress often doesn't resemble the character they're playing but when you add the makeup and mannerisms with Hopkins why not find an actress who resembles Leigh?

Anyway, I can't wait to see the film and I'll certainly go into it now remembering everything you've so eloquently pointed out here.