Why the Hitchcock 9 Matters 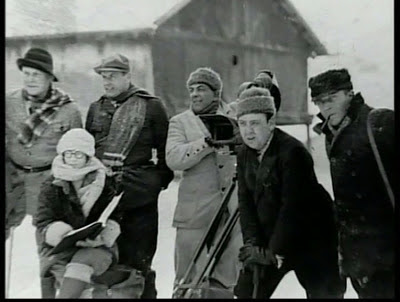 Hitch and crew on location in Obergurgl, Austria, shooting his lost silent film, The Mountain Eagle. Reportedly, the locals were miffed when he made fun of the gutteral sound of their dialect. Oh, those Obergurglians.


Of the 53 feature films Alfred Hitchcock directed, 10 of them—nearly 20 percent—were silent. And these are the kinds of films that he wished he could keep making, because, for him, “silent pictures were the purest form of cinema.” Back then, the talent of a filmmaker was measured by his ability to make a movie with the fewest dialogue title cards. On that score, Hitch beat just about everybody in the business.

Nevertheless, Hitch eagerly embraced technological change. Through a quirk of timing, his tenth film, Blackmail (1929), turned out to be not only his—and Britain's—first "talkie," but it was also his last silent movie when he directed two versions: one silent, the other with a full soundtrack. For the latter, some scenes were completely reshot with spoken dialogue, while for other portions, he reused prior footage and simply added music and sound effects. Since not all theaters were yet equipped for sound, the studio released both a sound and a silent version of the movie, inadvertently handing future generations of Hitchcock geeks a golden opportunity to compare his methods for treating the same material under two different conditions.

"I was looking forward to [shooting with sound]," he told Peter Bogdanovich years later, for its contribution  to movies "was to complete the realism of the image on the screen."

Still, for him, it was the visual aspect of filmmaking—framing, montage and camera movement—that mattered most; and to hear him describe it, these techniques could only be mastered in an environment in which audible dialogue was not an option. In 1972, when asked by François Truffaut to comment on film school education versus on-the-job learning, Hitch declared that university training was okay “only on condition that they teach cinema since the era of Méliès and that the students learn how to make silent films because there is no better form of training.”

In view of this, the British Film Institute's fully restored "Hitchcock 9" collection of the director's nine extant silent films can be viewed as Hitchcock's manifesto for pure cinema. (The tenth film, The Mountain Eagle, is lost.)* All you need to know about Hitchcock—and maybe even filmmaking in general (except for the audio part)—can be found in these nine films.

The Lodger, of course, is the crown jewel of the collection. Made in 1927, it’s his first thriller, complete with all the tropes we love about Hitch's movies: it's an eruption of Hitchcockian blondes, cockeyed love triangles and religious symbolism. It’s got his first cameo. Its police are after the wrong man. It features moody, Germanic lighting and camera angles; innovative, hallucinatory special effects and a Jack the Ripper-style killer. The Lodger was an astounding achievement and a huge hit. No wonder Hitch described it as “the first true Hitchcock picture.”

But there, I think Hitch was wrong. For me, “the first true Hitchcock picture” was actually his first credited directorial effort.

Sure, Hitch was only about 26 when he helmed his first feature, The Pleasure Garden (1925), but he’d already occupied just about every position a person can hold behind the camera. (He'd even briefly sat in the director's chair a few times.) The movie’s freshness, style, humor, urbane knowingness and, yes, inventive and expressionistic use of the camera pleased critics and audiences alike. More than merely an auspicious start, this is just damned good moviemaking; Hitch debuted as a fully-formed master of his craft. The familiar staircases, his brand of voyeurism and his penchant for implicating the audience in his characters’ naughtiness are all right there in the first frames. True, it is a melodrama, but aren’t all of his films? The Pleasure Garden is a film that only Alfred Hitchcock could have directed. And it was a hit. Within two years of its release, Hitch would become England's highest-paid director (so much for Malcolm Gladwell's late-bloomer theory).

But that’s the obvious stuff. Other, more subtle, pleasures can be found in these early films. In 1927, the brass at British International Pictures gave him a free a free hand to select any material he wanted for his next project. Modern fans might be surprised at his choice: a love story written by Hitch himself about two prizefighters vying for the same woman. Interestingly, just as Strangers on a Train was a free-associative riff on doubles, The Ring is an extended thought-experiment on rings as metaphors. Boxing rings, wedding rings, bracelets, drums, spinning carnival rides and characters like "One-Round Jack" pile up in the visuals, which are of a piece with the circular structure of the plot itself, all practically sitting up and begging for interpretation. As self-contained, circular, binding crucibles of conflict and connection, his ring metaphor even extends outward to suggest an ambivalent view of film itself, represented by the whirring spools mounted on a film projector. (There's no record of why he chose not to make his customary appearance in this film; my half-baked theory is that the famously conflict-averse director simply chose to stay out of the ring.) For my money, The Ring is the unsung masterpiece of the lot.

The Manxman, another melodrama centered on a love triangle, explores the attraction/repulsion of human desire, the relativity of our morals and the need to always be vigilant (see Shadow of a Doubt). As I’ve written elsewhere, “the eternal Judge (i.e. God) of The Manxman isn't all that cut and dried, and whatever religiosity the film might promote is tendered ironically.”

While it’s true that only two of the films in the collection—The Lodger and Blackmail—are thrillers, that doesn’t mean the remaining seven aren’t Hitchcockian. Keep in mind that even Hitch himself wasn’t thrilled to be pigeon-holed as a purveyor of thrillers. When he moved to the United States in 1939, David O. Selznick promoted him as the Master of Melodrama—not suspense. And when you compare his films with thriller movies from other directors, the truth about the so-called Master of the Macabre becomes even clearer: Hitch loved all kinds of drama and romance; the thriller content was just a lure to get audiences’ butts in theater seats. First-timers might be drawn to Hitchcock for the sexy thrills he provides; but it’s such nuanced, empathetic, intelligent thinking-through-the-camera that makes casual fans into Hitchcock geeks.

“I try to tell my story so much so in pictures," Hitch declared, "that if by any chance the sound apparatus broke down in the cinema, the audience would not fret and get restless because the pictorial action would still hold them! Sound is all right in its place, but it is a silent picture training which counts today.”

Hitch never forgot his origins in silent cinema. Think of those long, sublimely quiet passages in Vertigo, or the wordless chase through a funereally silent museum in Torn Curtain. He loved to turn the sound off for his audiences and let them bask in his masterful control of their emotions through visual means. The "Hitchcock 9" collection provides that experience.

*To be exact, Hitchcock directed two additional films, bringing his total list of directed films to 11: No. 13 (1922, unfinished) and Always Tell Your Wife (1923, uncredited and unreleased).
Alfred Hitchcock Alfred Hitchcock Geek Hitchcock 9 Joel Gunz The Lodger The Manxman The Pleasure Garden The Ring

Pat McFadden said…
Well done as usual Joel! I would like to speak up on behalf of DOWNHILL, which impresses me more and more each time I see it. Often dismissed as an unimportant work with overobvious symbolism, it's another perfectly told melodrama, this time with an even better performance by Ivor Novello who carries the entire film's narrative. There are several brilliant sequences and possibly the best nightmare sequence in any Hitchcock film - definitely of his British period.
June 25, 2013 at 4:02 PM

Joel Gunz said…
Hey Pat! I agree. That nightmare sequence is indeed one of the best. Hitch had a lot of plates spinning - literally and figuratively!
June 25, 2013 at 6:03 PM

Doug's Blog said…
Joel, these are good times for casual movie buffs like me to rediscover or see for the first time these masterworks restored. Thanks for your incisive and informative background on the younger Mr. Hitchcock.
June 28, 2013 at 2:21 PM

Joel Gunz said…
Thank you, Doug! These are good times indeed. I think that, once these movies make it toDVD/Blu-Ray, we're going to see a whole new wave of scholarship. On the bigger picture, it seems that silent film in general is enjoying a renaissance. So it's kind of exciting.