Alfred Hitchcock and the Case of the The Invisible Director: How Hitch's Light Touch Resulted in Some of Cinema's Most Powerful Screen Moments 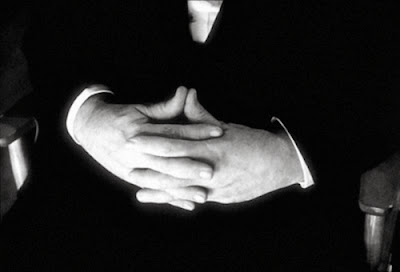 Hitch's customary position while in the director's chair.

Alfred Hitchcock was known as the movies' biggest control freak, with the exception of one group: his actors. Per his canard that actors ought to be treated like cattle, most people believe he didn’t care what they did, as long as it didn't interfere with his business behind the camera. Nevertheless, for someone who claimed—and seemed—so disinterested in such matters, Hitch captured some of the most moving performances in cinema history. What's up with that?

Before going any farther, I should emphasize that, when giving blocking directions to his actors, he could be very explicit. This was necessary, as the lighting, camera setup and set design were all geared for a limited range of movement. One wrong move and an actor could step out of focus or into a scene-killing shadow. But in general, as long as a performer kept his or her marks, Hitch seemed rather hands-off. Operative word: seemed. I think the opposite was true. He was very involved in his actors’ work; he just had a different approach when it came to directing.

Hitch began directing his actors even before they were hired. “Casting is characterization,” he would say, and he would obsess over the selection of the right actor who could naturally, unconsciously portray a certain character. By taking his time to choose carefully and well, 50 percent of his directing was done before he walked onto the set. This first step can't be overemphasized when discussing his directorial style.

True, Hitch often seemed aloof from his actors. On the set, he cultivated a persona that made him seem as imperturbable as a Buddha. His meticulous preplanning afforded him that luxury, and his air of serene command in the midst of bloated and sometimes competing egos was a necessity. More alert than he let on, however, he never missed a beat, or a skewed lighting fixture, or a biffed line of dialogue. In this atmosphere of quiet authority, it didn’t take a lot of bluster to get what he was after. Diane Baker, who played Lil Mainwaring in Marnie, acknowledged that Hitch always, albeit quietly, got what he was after by setting situations up that that paved the way for it:

“I felt that he really cared about me, that he trusted me to do my job. He suggested only a few ideas, but mostly relied on my own instincts, which gave me the freedom to act. In many ways I think it's a great way to direct. He had enough confidence in his vision to know how to create the right mood on the set, which allowed him to maintain control over his actors.”*

Further, when it was time to give direction, his direction tended toward the oblique. Baker continues:

“Most of the time he treated me with genuine warmth and sensitivity, but during the filming of one particular scene, he turned his back on me and was very abrupt. I remember during one rehearsal during the take, in the scene on the front porch when Sean and I watch Tippi ride away, while they were readjusting the lights, he caught my eye and then just turned away and talked to someone else. I thought that he was upset with me personally, that I had done something wrong, but he gave me no direction, and later I realized he wanted Lil to be strong-willed and have an element of hurt. He got that from me. He was the master, the Svengali, the one in charge. He was provoking me to act in a certain way… though I didn't realize it at the time.”

Baker wasn’t the only actor whom Hitch manipulated in this way. On the set of Rebecca, he was downright cruel to Joan Fontaine, which summoned her to deliver a painfully timid and vulnerable performance. But, again, the approach was oblique. Rather than ordering these actors to emote, he incited them to do so, an approach that yielded authentic results.

At the time, Hitch’s behavior in these cases was chalked up to the caprices of a prickly director. Later, however, most of his actors came to respect his methods. After Joan Fontaine was nominated for an Academy Award for her role in Rebecca, she leapt at the chance to work for him again the following year, in Suspicion, for which performance she won the statuette.

But Hitch was only quote-unquote “abusive” in a few cases. As mentioned, his default mode was detachment. At other times, to conjure up a more loose performance, he might whisper a dirty joke in an actor’s ear right before the camera rolled. He had all sorts of tricks up his sleeves that he called upon to elicit, not demand a strong screen performance.

Those oblique methods extended to his crew as well. By carefully choosing key players who were massively talented and who shared his aesthetic sense and then thoroughly preparing them for the project at hand, he knew he could give them a free hand to do their jobs to the best of their ability, and that they would deliver exactly what he was looking for. For this reason, Hitch was well regarded by his cinematographers because he rarely peeked through the lens of the camera. He trusted them. Imagine going to work under these conditions:

YOU: Mr. Hitchcock, I've set the camera up just as we discussed. Would you like to take a look through the viewfinder?

HITCH: Nope. I trust you.

Thus, during the filming of Topaz, he didn’t ask point-blank for Vermeer lighting in one of its scenes. Ken Mogg, blogger and author of The Alfred Hitchcock Story reports that he simply left a few Vermeer art books lying around, knowing that his set decorator and lighting director would flip through them while on break. The result were quite lovely: 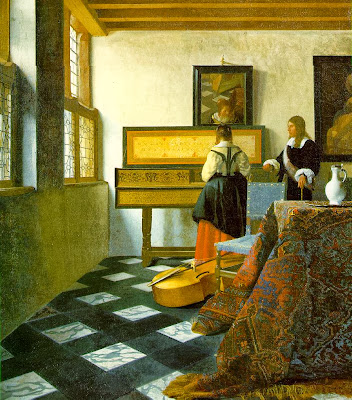 Getting back to Hitch’s blocking instructions. He could have allowed for more freedom on the set if he’d wanted to. (After all, other directors weren’t nearly as anal as he was.) But in his world, the camera was king. Only in rare cases did he allow his actors to choose their own blocking, with the camera puppy-dogging alongside them. Most often, the camera’s movements had been carefully choreographed ahead of time and the performer was expected, like a dance partner, to adjust to its lead. This, I believe, is the greatest manifestation of Hitch’s directorial control over his actors. By submitting to the lead of the camera, the actors acknowledged its presence in the room, like an observing angel at the least or at most, a higher power. His gambit paid off. Hitchcock's films have an ineffably self-aware quality that subliminally reinforces Hitch’s role as storyteller, a self-reflexive knowingness that compels scholars and casual fans alike to watch his films again and again.

Hitch was a smooth operator indeed, one whose directorial skills were so great that his talent didn’t even realize they were being micromanaged. I call it invisible directing and I think his films were better off for it.
--------
*From Hitchcock and the Making of Marnie by Tony Lee Moral, 2013 ed., p. 90

Doug's Blog said…
For a director with the rep as a control freak, he does seem to brought actors up to a level not expected by critics--Joan Fontaine being an excellent example. Like Woody Allen, a director who at first glance doesn't have much to common with Hitchcock, he seems to have kept an emotional distance from many of his actors---the better to manipulate some subtle shadings they could bring out. I gather from interviews with Karl Malden and Martin Landau that he preferred not to give critiques but let the actor catch on to what he wanted indirectly.
September 26, 2013 at 2:29 PM

Joel Gunz said…
Interesting stuff, Doug! Yeah, it's a very kind way to direct. Maybe he recognized that in dealing with often sensitive people that he handled them with extra soft kid gloves...