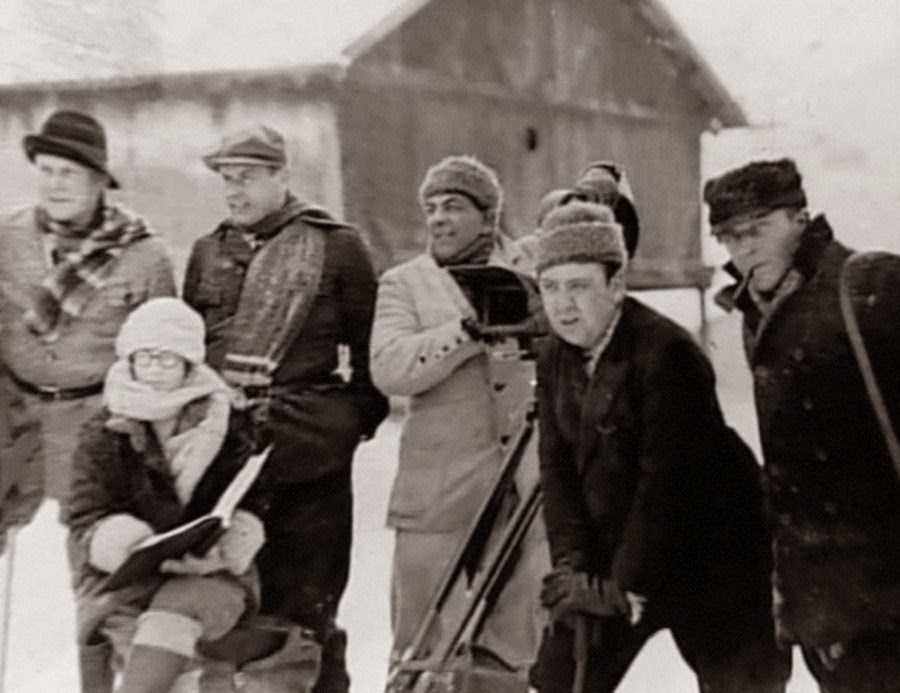 Hitch (standing) and Alma (seated) on location, filming the The Mountain Eagle.

It’s been called the Holy Grail of classic film—and now it’s been found. Last week, the Pasadena Film Institute contacted me to announce that they’ve verified the discovery of Alfred Hitchcock’s lost classic The Mountain Eagle. Hitch himself would have chuckled: hidden in plain sight, all seven reels had been stored in an antique film case labeled “Bartholomew the Strangler” that an associate of the director (name withheld) was using as a flower stand. The source said, “These spider plants just last forever, you know.”

Until now, the 1926 silent movie has been presumed lost to the ages. But the entire length is intact and, reportedly, it's in excellent condition. In fact, Hitch geeks can already start rewriting the story of his genius: several scenes were shot in color, and Hitch’s traditional cameo is expanded to a speaking role in which he plays the town grocer hawking discounts on a bumper crop of red cabbage. The title card has him shouting, “These heads are priced to roll!”

Even more intriguing, Hitch was already experimenting with the “trombone shot” that he perfected in Vertigo. As the town hermit learns that he is to be accused of murder, the camera dollies back while zooming in, giving the effect of walls closing in around him—the opposite effect of the later film’s dizzying "vertigo" shot. (In a typically Hitchcockian metatextual touch, the character says, “This isn’t quite what I want.”)

I know what you’re thinking. When can we see the movie? Good news! It’s going straight to DVD and Blu-Ray. First, however, the owners need to finalize their exclusive distribution deal with Hollywood Video.

FlushingLarry said…
Zoom lens??? I find that remarkable. If this is true then he is one of the first to use a zoom lens.

Anonymous said…
An April Fools joke that I and others I know that do not find it as that funny. Now your Hitchcock and Ed Wood collaboration film that was funny !
April 2, 2014 at 10:50 AM

A very apt pupil said…
I've seen the film, and it is in almost pristine condition. A real find! I was a bit taken aback by Hitchcock's full frontal nude scene, which was quite daring for the time. But it works for the plot. Who knew that Hitch nicknamed his penis "Macguffin"?
April 2, 2014 at 12:12 PM