Feeding Frenzy: An Evening Inside the Mind (and Belly) of Alfred Hitchcock 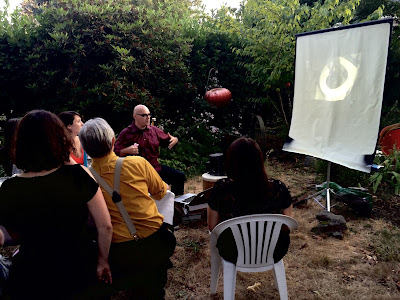 Alfred Hitchcock loved to make movies and he loved to eat—not necessarily in that order. Just about every one of his films features food as a supporting actor. In Blackmail, Suspicion, Shadow of a Doubt, Rope, Strangers on a Train, Psycho, Topaz and more, important scenes reveal deeper, often unappetizingly macabre, themes over a meal. You could write a book about it. Wait, there already is.

Recently, vintage 35mm slide film expert (and PhD economist) Laura Locker invited me to speak at a fundraiser for local schools. What started out as a straightforward dinner-and-lecture turned into a macabre evening with each course thoughtfully served with a Hitchcockian twist. Check out the menu and what I had to say: 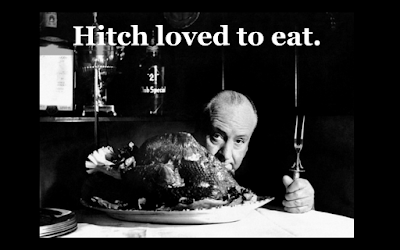 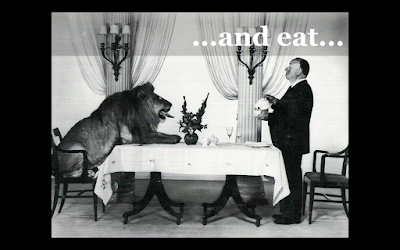 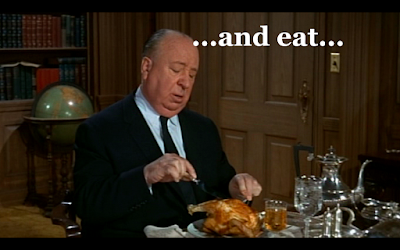 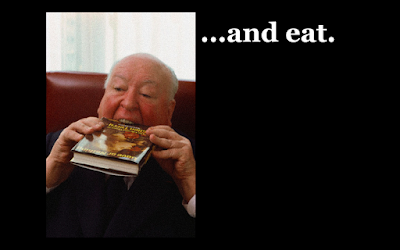 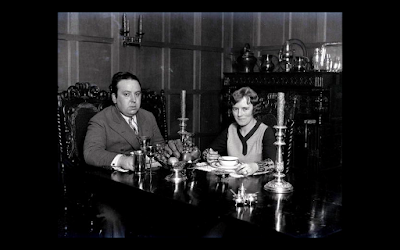 But he didn't take himself too seriously. 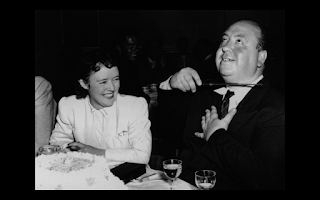 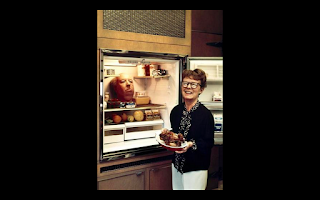 In these last few slides, we see Hitch with his wife of 50+ years, Alma Reville. She was as great a cook as you'd ever meet. I have a hunch that she kept Hitch fat and happy in order to create a bit more distance between him and the beautiful actresses he directed. Whatever the case, they had a sweet yet spicy relationship.

Sure, they were rich and famous, But the Hitchcocks kept a relatively modest ranch style home in Los Angeles' Bel-Air neighborhood. In the early 1960s, they remodeled their kitchen to create an open floor plan, with a bar where guests could hang out and enjoy wine while Hitch and Alma kept busy in the kitchen. This social-cooking arrangement might be common today, but it was unusual back then: as was typical for them, the Hitchcocks were ahead of their time. 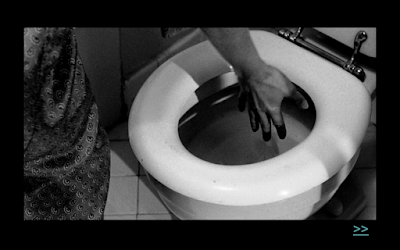 This is a delectable scene from Psycho: the first-ever close-up of a flushing toilet ever to grace the big screen. It's a reminder that tonight's meal, like every meal, will end up in the same place. Hitch himself was never far from that thought.

He sometimes mused about making a movie that would begin early in the morning with the chefs' helpers down at the wholesale market buying boxes of fresh produce and the finest meat; then loading up the delivery trucks to shuttle their cargo to a five star hotel kitchen, where an army of chefs in tall paper toques would slice and dice and chop and bake and fry and flambé all of those ingredients into gastronomic masterpieces. Then, with great ceremony, a brigade of waiters would march those platters out to hungry patrons in the dining room, who would then cut and scoop and scrape all of that food into their masticating mouths. The scene would end with a giant close-up of a sewer drain, disgorging the results of that into the river.

Hitch understood this deeply: it's shit we are and it's to shit we'll return, as the ending to Psycho shows:

That's not a dour, or even grotesque outlook. It's just the truth. Our attempts to avoid those facts are what get us into trouble. I believe that Hitch had his own holy trinity—and it looked something like this: 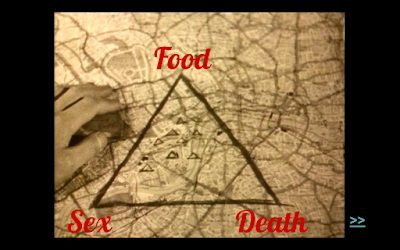 These are three elemental facts of life, and in his world they're inextricably intertwined. In Notorious' famous kissing scene—the longest screen kiss up till that time—Hitch makes the connection between food and sex when Ingrid Bergman and Cary Grant spend several minutes smooching and rubbing their tummies together: the whole time they're talking about an upcoming chicken dinner.

François Truffaut said that Hitch filmed his love scenes like murders and his murders like love scenes. A prime example of that is Dial M for Murder, where Anthony Dawson tries to strangle Grace Kelly. He throws her on the writing desk and climbs on top of her, adding a distinctly rapey aspect to the scene.

Hitchcock's greatest food film was Frenzy, from 1972. It's his second-to-last movie—a perfect bookend for his career. (His second film, The Lodger, from 1927—even the numbers are reversed!—was about a Jack the Ripper-style villain who roots around London for blonde victims to strangle.) Frenzy covers pretty much the same ground, with the added detail that the murderer prefers neckties. It neatly outlines Hitch's fascination with food, sex and death, as the trailer shows:
We're going to talk more about Frenzy and food. But for now: 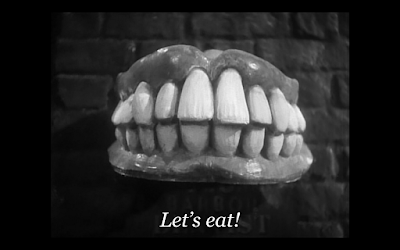 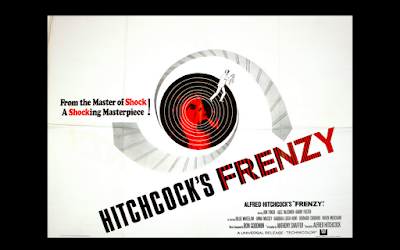 In Frenzy, Hitch treated food to grossly comical surreal effect—and it resembles another great food film, which came out the same year: 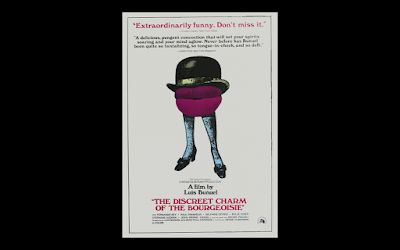 Made by the great surrealist Luis Buñuel, The Discreet Charm of the Bourgeoisie is about a group of hungry Parisiens in search of a meal; each time, they're interrupted and they never do get to eat. In the case of Frenzy, the police chief is served lavish meals that are all but inedible. Here's the rub: Hitch and Buñuel were friends; Hitch even called the surrealist his favorite director of all time. I have a suspicion the two directors were passing notes to each other in the back of class. 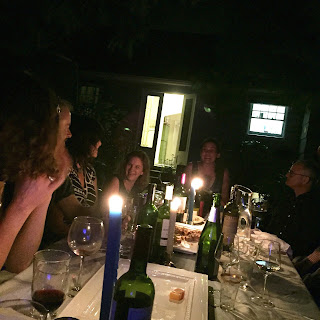 Now I'd like to introduce the next course with a clip from an episode of Alfred Hitchcock Presents. I think you'll agree that Barbara Bel Geddes' leg of lamb was a real knockout: 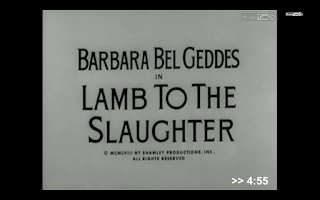 Throughout his career, Hitch occupied the spotlight while Alma, his partner in crime, was content to remain in the background. In 1979, he squared that up in his AFI Life Achievement Award acceptance speech:


"I beg permission to mention by name only four people who have given me the most affection, appreciation, and encouragement, and constant collaboration. The first of the four is a film editor, the second is a scriptwriter, the third is the mother of my daughter Pat, and the fourth is as fine a cook as ever performed miracles in a domestic kitchen and their names are Alma Reville."

A few years ago, their daughter, Patricia Hitchcock O'Connell, wrote a biography of about her mother, shedding some light on this important, but heretofore somewhat unknown woman. At the end of the book she added an appendix that reproduced several of Alma's most noteworthy guest menus. Here's one for dinner with Tippi Hedren: 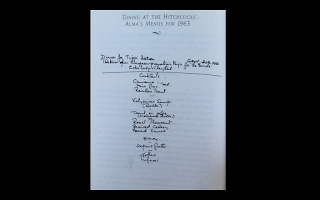 Here are a couple more images that reveal Hitch's domestic side—as well as his love of imports. Hitch was a neat freak, so after Alma cooked the meal, he enjoyed washing the dishes and tidying up the kitchen. 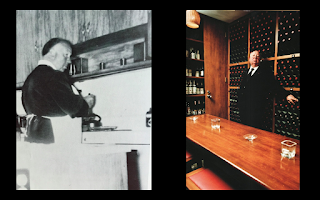 If you're an American of a certain age (like me), you might have had a mother who was raised on canned, packaged food. But then in the late 1960s, kitchens across America rediscovered fine dining. With the help of Time-Life's "Foods of the World" cookbook series, mothers everywhere tried their hand at preparing the unusual ingredients and exotic recipes featured therein. My mother's efforts, though served with love, didn't always deliver the results promised in those cookbooks' photos. This scene from Frenzy perfectly captures those moments of awkward domestic bliss, while also serving up a delightful blend of of food, sex and death:
And this leads us right into our dessert course!

We also enjoyed conversation about many other aspects of Hitch's films, his relationship to women (I hope I dispelled a few myths) and other topics. Then we all went home satisfied, mentally nourished and ready for a long, thoughtful spell in the loo. 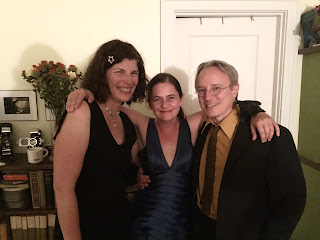 Laura, flanked by two guests, one of whom brought a Hitchcockian companion on his shoulder.