Introduction to Hitchcock and THE 39 STEPS 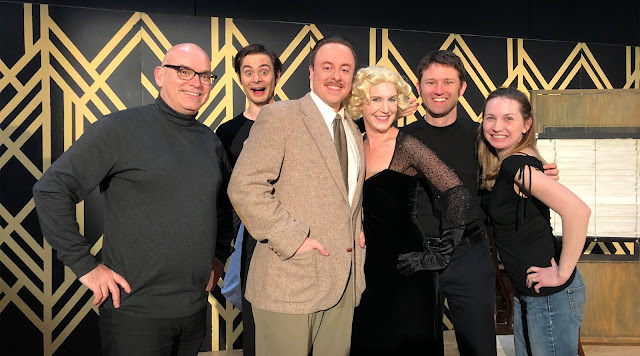 Back in April, I gave a talk on Hitch and The 39 Steps at the beautiful Beaverton Public Library, which was presenting the play based on that film. It was the continuation of a habit I'd started back in 2009 when when the producers of The 39 Steps, which was enjoying a successful run on Broadway, asked me to come out and do the same thing for their audiences. Luckily, this last time I had enough foresight to capture the moment on my iPhone.

Watching myself on video is an uncomfortable and, at times, surreal experience. But it was really this particular video that inspired me to embark on this Patreon project, which I'm convinced was a life-changing decision for me, and, I hope, inspires others to rethink the way film studies are approached.

I've broken up the video into easily digestible bite-size chunks. Like this:

Part 1: Peeling off the wallpaper and shellac
When we think of Alfred Hitchcock, we usually think of a portly old man. He wasn't always like that! In this section, I scrub off the layers to reveal a romantic and rather handsome young man with a punk rock attitude toward art. Check it out (5 minutes):

Part 2: The Spymaster of the 1930s
Hitch pretty much invented the spy movie. The 39 Steps has left its (cough) footprint movies from James Bond to James Bourne. Get the story (4 minutes):

Part 3: Before there was Hitchcock, there was this guy
But Hitch didn't invent the modern spy story. That credit goes to John Buchan, author of the novel The Thirty-Nine Steps, which Hitch and writing partner Charles Bennett adapted for the screen. The director brought his innovations to the project—and the rest is movie history. Learn how it all came down (3½ minutes):

Part 4: Creating a legacy
The 39 Steps was so successful that Hitch more-or-less went on the make it several times again. Learn why (6 minutes):

Well anyway, going forward, I'll be upping my video production game a LOT. And if you enjoyed these, I do hope you'll consider supporting the effort! Learn more on my Patreon page.