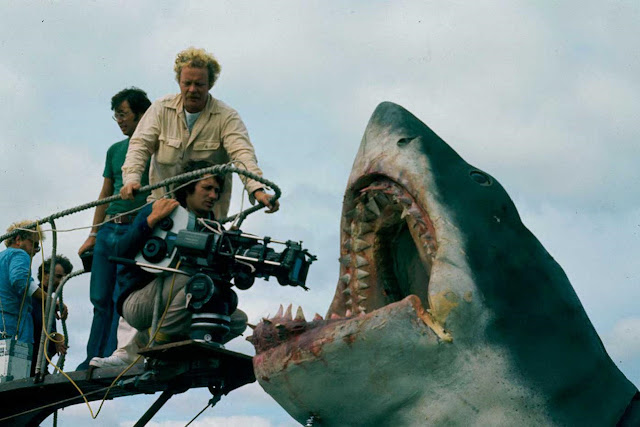 In 1975, Alfred Hitchcock was the third-biggest investor in Universal Studios, making him a wealthy man—and a towering presence among its creative leadership. Meanwhile, there was a much younger pup of a director who seemed to be all over the studio property at the same time. That was 26-year-old Stephen Spielberg.  He'd just released the smash hit Jaws—and he badly wanted to meet his idol, Hitchcock.

The Old Lion seemed to respect the Young Turk. And considering that Hitch's office bungalow was right there on the lot  next door to Edith Head's, they should have met. Yet, they never did. Not one single time. What’s up with that? It wasn’t for lack of trying on Spielberg’s part. For instance, just as he did ten years earlier during the making of Torn Curtain, Spielberg snuck onto a Hitchcock set. This time it was to glimpse the production of Family Plot. Once again, Hitch had him bounced—which was doubly strange, since Jaws' blockbuster profits had stuffed trunks-full of cash into Hitch's pocket. The least he could do was thank the guy.


Bruce Dern, who was starring in the movie, asked Hitch why he was being so standoffish. "You're his idol," he said. "He just wants to sit at your feet for five minutes and chat with you."

The director replied, "Isn't that the boy who made the fish movie?... I could never sit down and talk to him... because I look at him and feel like such a whore." Bruce asked him why would would say such a thing. Find out the reason (and so much more) in Part 2 of Hitchcock's influence on Steven Spielberg:

You're warmly invited to support my work on Patreon.

Great news! I'm now producing Alfred Hitchcock Geek as a video series. Combining a lifetime of scholarship with film sequences, rare behind-the-scenes clips, interviews with Hitch himself and more, I'm doing my part to bring Hitchcock studies into the 21st century while building a community that thinks more expansively about film, art and maybe life itself. It's a huge undertaking and I can't do it alone. Check out some of the videos I've made so far. If you like what you see, I'd be honored to receive your help!