On December 1, 2009, I dropped a thin line into the ocean of social media, hoping to connect with a film nerd or two. That was the birth of Alfred Hitchcock Geek on Facebook. Smash cut to today and, somehow, a community of over 195,000 fans has gathered from around the world to celebrate our geekery for the Master of Cinema! Along the way, to keep up with the conversation, we added a couple of very special co-hosts: Elisabeth Karlin and Pat McFadden, who bring a wealth of knowledge and three healthy scoops of passion, perspective and wit.
In this era of suspicion and even resentment over social media's presence in our lives, it's right to ask: can anything good come from Facebook? I have to answer yes! On our page, at least, we've formed a healthy, thriving, community of folks talking about art. Talking about ideas.
It's fueled my work—writing, speaking and in the last few years, filmmaking. For that, I'm personal grateful. All this derives at least some inspiration from our conversations on Facebook. It's been a labor of love. What a ride. Thanks for your participation! And, like Frankie used to sing: The best it yet to come!
Here are a few highlights from the last decade-plus-one. (Because Google's Blogger platform doesn't like to play nice with Facebook (grrrr), these are screenshots. Click the image to go to the original post.)
Hanging with two of the stars of The 39 Steps, who I interviewed following my talk:

A big part of our community has been to celebrate milestones of those in the Hitchcock-o-verse:

Here's a peek at an early Facebook page banner:

I knew there was something about Pat that made him just right to co-host this page..."

".... not to mention Elisabeth Karlin:

If you'd ever questioned my commitment to this project:

One of the greatest fringe benefits of building this community has been the friendships formed with scholars and authors like these guys:

Not to mention giving a certain lady her overdue props:

I don't know about you, but I see myself in the movies:

Of course, not all of the posts are educational. Some of them are practical life-lessons, like this one:

We've all grown up together.

In the coming days, I'm going to announce a new direction for the Facebook community. Stick around for details, but for now consider this a preview of coming attractions: 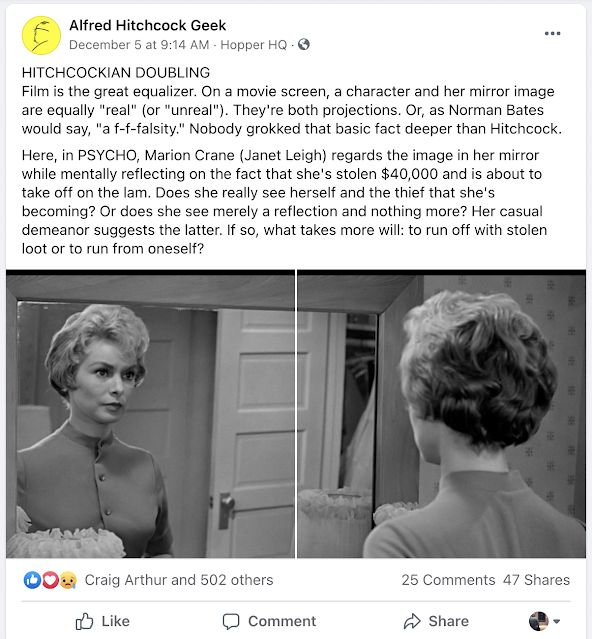