How to Watch Hitchcock - Part 1

Posted by Joel Gunz on February 14, 2005
On January 23rd, I presented the lecture "How To Watch Hitchcock" to a group of film, art and philosophy devotees. What follows is more or less the substance of the first half of this presentation; the concluding half will appear next month. 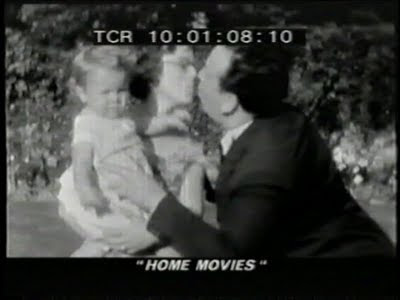 Hitch at home with his wife and creative co-conspirator, Alma and their daughter, Patricia, around 1930.
Who was Alfred Hitchcock?
Movie mogul David O. Selznick was cautiously respectful when he first met Alfred Hitchcock. "He's not a bad guy," the producer said, "although not exactly a man to go camping with." Fair enough. After all, I'd rather not dwell on the mental image of Alfred Hitchcock peeing in the woods.

Since his death in 1980, academic interest in Hitchcock's film work has nearly become a full-blown industry. No fewer than three full length biographies have been written about him, as well as dozens of academic books, fan books, coffee table books, "making of" books and at least one pop-up book. There are two scholarly magazines devoted to him; the chore of merely tracking the growing list of articles, treatises, college courses and websites could, in itself, be a part-time job. What's all the fuss about? I'm going to try to answer that tonight. But first, some biographical background.

Alfred Hitchcock was not a seriously messed up person.
Donald Spoto's 1983 biography, The Dark Side of Genius, attempted to portray the director as a sexual aggressor, sadist, sociopath, and more. Most of the conclusions Spoto drew have been dismissed as, at best, exaggerations; at worse, mere conjecture. Some of the author's sources have even stepped forward to complain that their statements were taken out of context and even misquoted.

So, since I'm asked about this all the time, let's set the record straight. By all verifiable accounts Hitch was a devoted family man who kept bankers' hours, regularly returning home to his wife each night of their some 60 years of marriage. He was a devoted father and a loyal and thoughtful friend. Granted, there were some embarrassing - even ugly - episodes in his life. But he was hardly the satyr or psychopath that some perceive him to have been.

Hitch was also industrious, as shrewd in his business affairs as he was brilliant in his artistry. By age 35 he was hailed as Britain's greatest film director, a fact which testifies to his hard work, ambition and social skills as much as it does to his creative genius.

The early years.
Hitchcock's first films, however, weren't made in England, but in Germany. While in Germany he met the great director F. W. Murnau, watched Fritz Lang work on the set of Die Nibelungen, and soaked up all that was unique about German cinema: its emphasis on visual storytelling, psychology and the postwar pathos of the Expressionist movement. He carried these influences throughout his career, right into his final film, Family Plot (1976).

To a casual viewer, Hitch's movies seem like solid, if relatively tame, thrillers carefully attenuated to shock middlebrow audiences. But look again. A curious subversive streak runs through them, whether it's the gay ovetones of Rope and Strangers on a Train or his skepticism about the West's role in the Cold War in Torn Curtain and Topaz. And it's no wonder. In his early days, Hitchcock had joined the London Film Society, which was formed to present experimental, avant garde and foreign films. George Bernard Shaw, H.G Wells, Augustus John, Maynard Keynes and Anthony Asquith, along with Hitchcock's friend and business partner Sidney Bernstein and colleague Ivor Montagu were among the Society's members. This hodgepodge of artists and intellectuals drank deep of such philosophers as Schopenhauer and Nietzsche. He ran around with Dadaists, surrealists and existentialists and was fascinated by their preoccupation with the destructive potential of art.

"Drama is life with the dull bits cut out."

Obviously, Hitchcock's films are thrillers. But Hitch didn't necessarily see it that way himself. In a 1936 article, "Why I make melodramas," he stated that he really wanted to make films about everyday realities of life. However, a film like that would be very boring. So instead, he built his stories by taking seemingly ordinary events, cutting out all the boring parts, adding a thrill or two and keeping intact the drama and heightened emotion. Psycho is a perfect example. Yes, it has weirdo serial killer. But the main plot driver is a rather banal story of a young couple's problem with their finances and love life.

Hitch once claimed that he "practiced absurdity religiously," and indeed his films follow the twisted logic of a fever dream. His characters were thrust into seemingly improbable situations and often complained that they felt as if they were in a dream, or that what was happening seemed unreal.

"I like to make movies with multiple chases and lots of psychology."
A Hitchcock movie is indeed a movie of chases. The director often spoke of a plot device he called the MacGuffin. It's the thing that the main characters are after. It could be jewels, documents or anything. It doesn't matter what the thing is — it simply has to exist. In Notorious, the Macguffin was uranium ore. Ultimately, it's a sort of red herring whose sole pupose is to drive the plot forward. Other than that, it's almost irrelevant to the film. My favorite Macguffin appeared in North By Northwest: its MacGuffin — a vague international spy plot — was revealed to Roger Thornhill (Cary Grant) just as an airplane flew overhead, drowning out that part of the dialogue. That's how perverse Hitch's sense of humor could be. (Later, we learn that it's top secret microfilm, but by then we're hooked and, besides, at that point the movie is almost over.

Psychotherapist M. Scott Peck once wrote, "Sanity is the relentless pursuit of reality at all costs." Similarly, Hitch once said in an interview that "reality is something that none of us can stand at any time." If these two men are right — and I happen think they are — it follows that most of us are insane.

I believe that, at their core, this is what Hitchcock's films are about: Reality - the pursuit of it, the ways we avoid it, and the consequences of either choice. Clearly, as Dr. Peck asserts, we'd be crazy to run from reality. So, maybe we're all a little coo-coo. Or as Psycho's Norman Bates observed, "we all go a little crazy sometimes." But along with the nightmares, the insanity, and the general pessimism, Hitchcock was ultimately a jokester who felt great compassion for mankind.

Not sure about that? Drop by later, as I'll be serving up the conclusion to this article.