North by Northwest and the Number 13 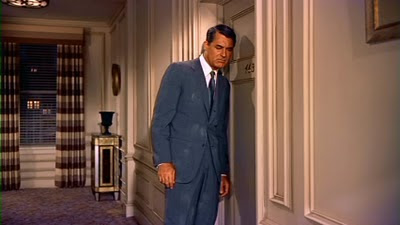 The numerals on Eve's hotel room in Chicago add up to 13. Coincidence? I think not. Or, maybe not-not.
In Alfred Hitchcock's movies, even the slightest details can be illuminating. At the same time, a word of caution is in order when examining his or any others' films; even the most well-planned movies enjoy what are nothing more than happy coincidences. I just re-watched Alfred Hitchcock's North by Northwest the other night and couldn't help noticing a recurrence of the unlucky number thirteen.
Curious, isn’t it? It probably means nothing. Or does it? I just post them as I see them.
Alfred Hitchcock Film Criticism Film Philosophy Film Studies Joel Gunz Movies North by Northwest

Jawa said…
I'm going to have to watch it again now. No chore though as it's my favourite Hitchcock. Unless it's The 39 Steps, or perhaps Rear Window. It's a tough call especially as there isn't one I don't like apart from maybe Under Capricorn. Even that has it's moments though.
May 10, 2010 at 3:22 PM