North by Northwest and Surrealism 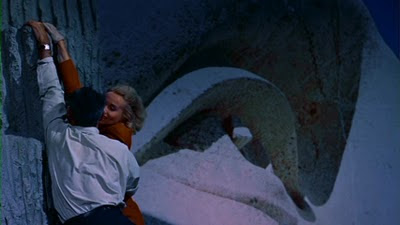 Cary Grant, Eva Marie Saint and special guest George Washington's eyeball.
In my May 24, 2007 post, I talked about Alfred Hitchcock's penchant for surrealism and what, it would seem, he was getting at. Further indispensable reading on Hitch and surrealism is found in Nathalie Bondil-Poupard's essay "Such Stuff as Dreams are Made On: Hitchcock and Dali, Surrealism and Oneirism," which appears in Hitchcock and Art -- Fatal Coincidences.

Bondil-Poupard astutely observes that "in alluding -- whether consciously or not -- to his many and varied aesthetic influences, from Romanticism to Expressionism, from Symbolism to Surrealism, [Hitchcock] appropriated, assimilated and transcended them. Such is the hallmark of any great artist."

From there, she reaches beyond Dali to discuss surrealism in several of Hitch's movies.

Bondil later adds: "With tongue only half in cheek, I leave you with the contention that the most Dalinian of Hitchcock's films is actually North by Northwest. The film, which even its creator admitted was like one long dream sequence (he compared it, incidentally, to a painting by [WWI avant garde artist] Christopher Nevinson), is pure fantasy." Regarding the movie's improbable locations, such as an air strike in a desolate cornfield and the chase across Mt. Rushmore, she adds the reminder that "image and imagination, after all, are derived from the same word."

I'm not sure which specific Nevinson painting Hitch might have had in mind, but here's one that suggests the beautiful terror of death in the sky, which, in spirit and tone could anticipate the crop duster scene: 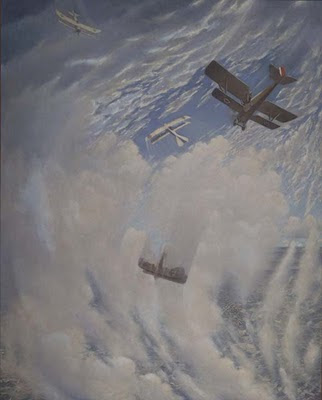 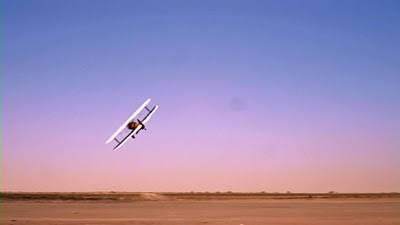 We are so often treated to the iconic clip of Cary Grant running from the biplane that it's easy to overlook that much of the three-minute sequence is dedicated to lingering shots of the menacing aeroplane itself.

(Update: for more information on the Nevinson-Hitchcock connection, see my May 29 post about John Ferren's work in Vertigo.)