Vertigo and Marilyn Monroe's Niagara are so very alike.

Posted by Joel Gunz on March 25, 2008
If you ignore my various neuroses, you might see that I am a fairly well-adjusted male. How is it, then, that I’ve never seen a Marilyn Monroe film?

Happily, I've rectified that situation. Recently, I rented Monroe’s 1953 breakout film Niagara. I was stunned. The similarities between this excellent movie and Alfred Hitchcock's Vertigo are numerous. Oh, and the blonde chick was gorgeous.


Both movies feature a blonde femme fatale who is obsessed over by a mentally unbalanced male lover. One big difference, though, is that Monroe's Rose Loomis is all steam and curves, whereas, Kim Novak's "Madeleine" is statuesque and glacially cool. I'll be coming back to this later. 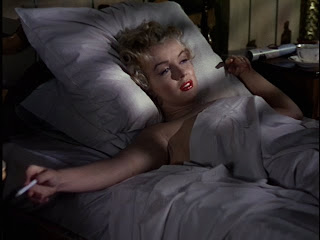 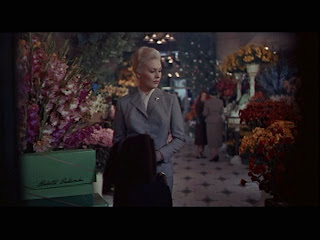 Kim Novak as "Madeleine" in Vertigo.


The prominent use of bell towers in each film, in which the female leads each meet her doom, make the connection very obvious. 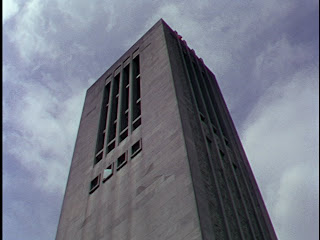 The Rainbow Tower in Niagara. 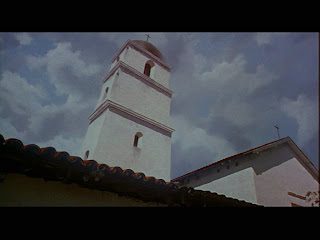 The bell tower of Mission San Juan Bautista. The original bell tower had been torn down about 10 years before the filming of Vertigo. Hitchcock "reconstructed" it using special effects.


There are similarities in mood as well. Both films have a transcendent, pristine quality that hearkens back to better days, a yearning for a more untroubled past. Some of the scenes also exhibit an Edward Hopperesque loneliness. 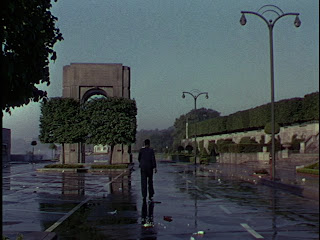 George Loomis (Joseph Cotten) taking a lonely stroll on the Canada side of the falls. (That's Toronto's Memorial Arch, which was demolished in 1967 to make room for a parking lot. Fie on them.) 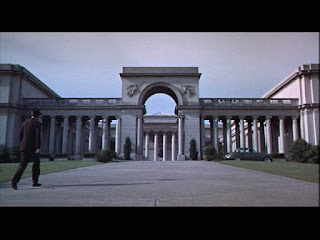 Scottie Fergusen (James Stewart) follows "Madeleine" into San Francisco's Palace of the Legion of Honor.
Niagara, set in Niagara Falls, emphasizes the pristine beauty and power of this natural wonder, while many scenes in Vertigo also speak to the ancient, eternal beauty of the natural world. (Both films also use these settings to dwarf the small, brief lives of their characters and to serve other thematic interests.) 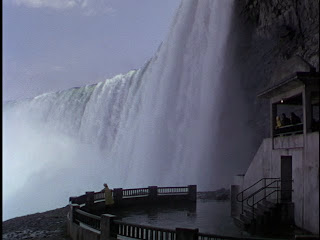 George Loomis observed that Niagara Falls has had "10,000 years to declare its independence." 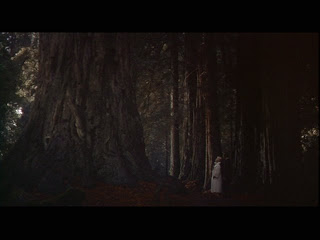 "Madeleine" and Scottie Fergusen gaze up at a tree that Scottie declares to be "2,000 years old or more."

Well, some of this has been commented on before. But I think there's more to consider, and a closer look at these films can even reveal something more about what Hitch was thinking about at the time. Stay tuned for part two.
Alfred Hitchcock Film Criticism Film History Film Philosophy Film Studies Kim Novak Marilyn Monroe Niagara Vertigo

Joel Gunz said…
ATTENTION: DO NOT CLICK ON "FENRIDAL" s link above. It will launch a spyware progra,. Im trying to remove it but havent figured out how...
March 26, 2008 at 1:46 PM

Juliette said…
I have Vertigo but have never seen it, so that's next w/end's movie! Niagra is my fav Marilyn Munro movie. Ineteresting thoughts on Hitchcocks own idea of sexuality, with the differences between Novak and Munro - will feed back when I've seen Vertigo, thanks.
November 8, 2010 at 6:20 AM

DorianTB said…
Joel, thanks for steering me toward your fascinating, thought-provoking post comparing NIAGARA and VERTIGO! Marilyn Monroe was certainly a very different kind of blonde than Kim Novak in Madeleine Elster mode, but no less effective for all that. You made an excellent point about NIAGARA's Edward Hopper-like images -- images that seem to me to have a wholly appropriate film noir feel, not to mention a Hitchcockian flair. Great post, Joel, and just in time to watch NIAGARA again this evening on TCM (November 2nd, 2011 at 8 p.m., for the record :-))!
November 2, 2011 at 1:22 PM

Dimitri said…
Marilyn Monroe actively campaigned to star Kim "Vertigo", but apparently was rejected by Hitchcock, which he reportedly later regretted not at least testing her.
January 13, 2019 at 9:10 PM