Posted by Joel Gunz on May 27, 2008
Several weeks ago I pointed out a number of similarities between Marilyn Monroe’s Niagara (1953) and Alfred Hitchcock’s Vertigo (1958); you can check out that post here. At the time I promised to follow up with more ideas. Well, here goes.

Hitch apparently borrowed numerous visual ideas and plot points from Niagara. In fact, Vertigo can even be seen as his response to that film.*

The two movies share many similarities. Both stories concern a mentally unbalanced man who takes an obsessive – and possessive – interest in the beautiful leading lady, which leads to betrayal and tragedy. 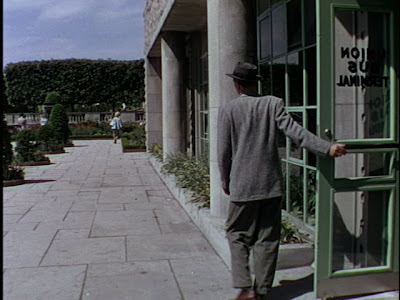 George Loomis (Joseph Cotten) can't stay away from his errant wife, who leads him into a trap.... 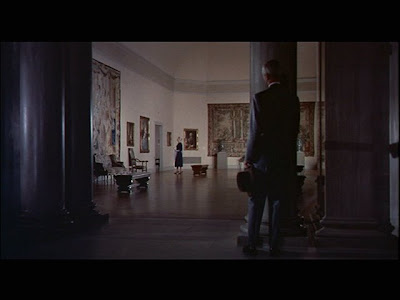 ...Nor can Scottie Ferguson (James Stewart), who follows 'Madeleine' -- to his own tragic demise. 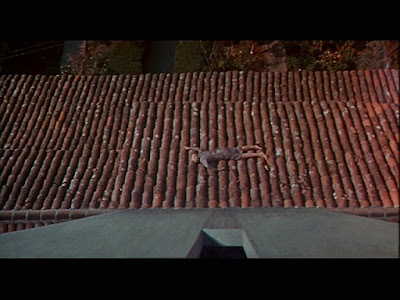 'Madeleine' seems to meet her end in a fall. 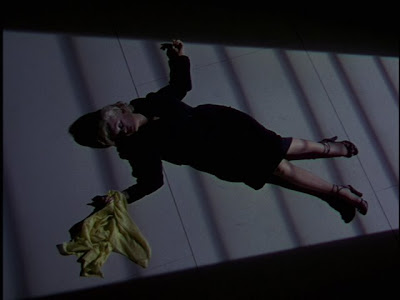 Rose, on the other hand, dies at her crazed husband's hands.
One big difference, though, concerns that leading lady: Niagara’s Rose Loomis (Monroe) smolders with over-the-top sexuality, lounging half-dressed about a Niagara Falls honeymoon motel through much of the film. 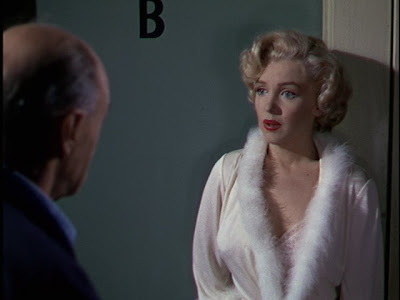 With Vertigo, on the other hand, ‘Madeleine’ (Kim Novak), keeps her best parts primly buttoned up and tucked away under a grey silk suit. 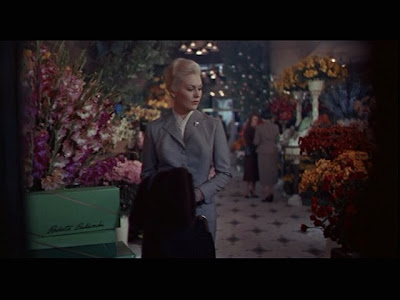 Yet, both, in their way, use their femininity to charm other men. 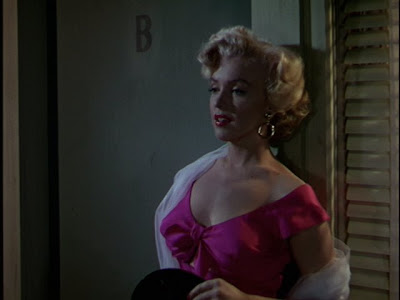 Rose hooks men with the promise of sex.... 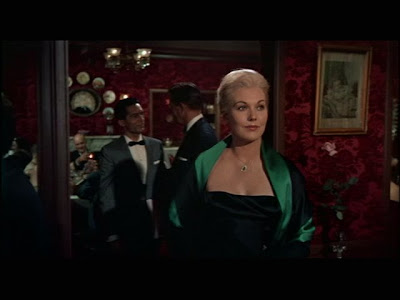 ....while 'Madeleine' teases them along with a question mark about her sexual availability.
And that is the point Hitch seemed to be making.

In Hollywood, sexy blondes have always guaranteed tickets sales better than any other gimmick yet devised. Back in the day such idols as Jean Harlow (the original Blonde Bombshell) and Jayne Mansfield oozed sex from every curve. Monroe played that game better than anyone and in Niagara, her breakout role, something new sizzled on to the screen. In 1953, the New York Times famously gushed:

“Obviously ignoring the idea that there are Seven Wonders of the World, Twentieth Century-Fox has discovered two more and enhanced them with Technicolor in "Niagara," which descended on the Roxy yesterday. For the producers are making full use of both the grandeur of the Falls and its adjacent areas as well as the grandeur that is Marilyn Monroe.”

But Hitch had his own ideas about onscreen sexuality. As the director sniffed in an American Film Institute interview in 1972,

“I’ve never been very keen on women who hang their sex round their neck like baubles. I think it should be discovered. It’s more interesting to discover the sex in a woman than it is to have it thrown at you, like a Marilyn Monroe or those types. To me they are rather vulgar and obvious.” (Italics mine.)

Hitch was hardly a prude. He wanted to keep sex mysterious, and he held strong opinions about the matter. Writing in The Hollywood Reporter in 1962, he described what he felt was a more enlightened understanding of female sex appeal:

“We have all seen women who exaggerate their physical attributes to a point where they can hardly be ignored. Men may stop and stare at such women. They may even show a lively interest in meeting them. But a man who does manage this kind of meeting may be disappointed to learn that his new friend has very little mystery about her, once he knows her name.

“As for myself, I prefer a woman who does not display all of her sex at once – one whose attractions are not falling out in front of her. I like women who are also ladies, who hold enough of themselves in reserve to keep a man intrigued.... When a man approaches her, the audience should be led to wonder whether she intends to shrink from him or tear off his clothes.”

Marilyn Monroe took out all of that guesswork from her characters. My guess is that when Hitch saw Niagara, he decided to make a film putting forth his own idea of sexiness – along with the additional psychological baggage that his personal tastes brought with them, such as the male angst engendered by his ideal women’s unattainability. The way I see it, Vertigo is his statement about what he considers to be truly sexy in a woman. It is his reaction to the manufactured sex appeal of the Hollywood star system of that time – and by numerous allusions, he refers to Niagara as his case in point.

Hitch's leading ladies were the antithesis of the typical Hollywood vixen. While the latter paraded their voluptuousness in a wardrobe that barely skirted the Production Code of the time, Hitch’s blondes kept their lithe bodies concealed under demure suits and other high fashion straightjackets. Other Hollywood stars approached their leading men with a come-on, but Hitch’s leading ladies could be off-putting. By working against the grain of Hollywood stereotypes, this British gourmand created something distinctive, if not unique: the iconic Hitchcock blonde. Other directors and actresses have been playing catch-up ever since.
----------
*Taken as a whole, Niagara plays a minor role in the storytelling of Vertigo. There are several very important antecedents to Hitchcock's film: Portrait of Jennie, the Pygmalion stories from ancient Greece through George Bernard Shaw’s play of the same name and the 1956 Broadway hit My Fair Lady (which theater-loving Hitch very likely saw) are the most noteworthy. In its title sequence, Vertigo’s direct origins are credited to Boileau-Narcejac’s French novel D’entre les morts.
Alfred Hitchcock Books About Alfred Hitchcock James Stewart Kim Novak Marilyn Monroe Niagara Vertigo

Unknown said…
what a great comparison-- I've seen both movies numerous times and the correlation never occured to me! I have to go back and watch them back to back now!
February 23, 2009 at 12:42 PM