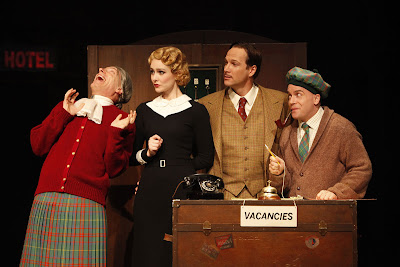 Broadway's The 39 Steps sends up just about every movie in the Hitchcock catalog. I'll be speaking Tuesday, September 1 after the show. If you're in NYC, drop on by!
Alfred Hitchcock’s plots don’t always make much sense, following, as they often do, the lucidly contorted logic of a fever dream. Yesterday, I described The 39 Steps as the "sum of all Buchan's and Hitchcock's worst fears." Watch it again, and you’ll agree that it's an end-to-end nightmare, complete with a scene in which the hero must participate in that most common of nightmare scenarios: unprepped public speaking.

The impromptu speech delivered by Richard Hannay (Robert Donat) at a political rally for a local candidate wasn’t as random as you might think. Sure, Hitchcock and screen writer Charles Bennett devised some deft stagecraft to get him on stage, but it was for a good cause. (Pun intended. See the script extract below for more of the same.)

This scene provided some good comic relief at a point in the movie when tensions were running high. It also made a timely political statement. In 1935, Europe was in a tense mood, and his speech called for peace when so many were speaking of war.

For me, it’s also one of the most touching scenes in the movie. Richard Hannay had spent four days running for his life, begging for help from anyone who would listen. At this point, his resources seemed dried up, with a noose winding inexorably around him. He had nowhere else to run or hide. In fact, the police were waiting in the wings to handcuff him the moment he left the stage. Under these conditions, he offered up an eloquent cry for peace and understanding—for himself and for all other people who were caught up at that time in the international conspiracies that eventually brought about World War II.

Every line of this scene is a hilarious in-joke between the filmmaker, his beleaguered hero and the audience. Take a look: 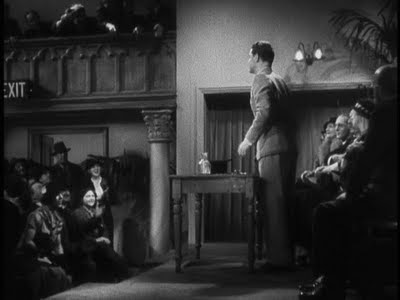 In Hannay's brief turn as an impromptu orator, life is but a (celluloid) dream.
EMCEE: Ladies and gentlemen, I'm now going to call upon the speaker of the evening.

EMCEE: There's no need to say who he is or to speak of his brilliant record as a soldier and a statesman. He's a son of Scotland who has crossed the border and conquered England. He is now one of the foremost figures in the diplomatic political world in the great city of London. I'm, therefore, going to ask him to tell you something.

AUDIENCE MEMBER: It's about time, too.

EMCEE: How important it is to this constituency that at this crucial by-election our candidate should be returned by an adequate majority. I now ask for Captain Fraser.

HANNAY (Rises to take podium): Ladies and gentlemen, I apologize for my hesitation in rising just now, but I'd entirely failed while listening to the chairman's flattering description of the next speaker to realize he was talking about me. As for you, may I say from the bottom of my heart and with the utmost sincerity how delighted and relieved I am to find myself in your presence at this moment. Delighted because of your friendly reception and relieved because so long as I stand on this platform I am delivered from the cares and anxieties which must always be the lot of a man in my position. When I journeyed up to Scotland a few days ago , traveling on the Highland Express over that magnificent Forth Bridge — that monument to Scottish engineering
and Scottish muscle — that is to say, on that journey I had no idea that in a few days time I should find myself addressing an important political meeting. I had planned a very different program for myself. A very different program. You'd be for the moors to shoot something. Or somebody. I'm a rotten shot. Anyhow, I little thought I should be speaking tonight in support of that brilliant, young statesman. The gentleman on my right, already known among you as one destined to make no uncertain mark in politics. In other words, your future member of Parliament, your candidate, (failing to properly read the candidate’s name on a nearby sign) Mr. McCrocodile.

HANNAY: I know your candidate will forgive my referring to him by the friendly nickname
by which he's already known in anticipation, mark you, at Westminster. Now, ladies and gentlemen, we'll discuss some topic. What shall it be?

AUDIENCE MEMBER: What about the idle rich? 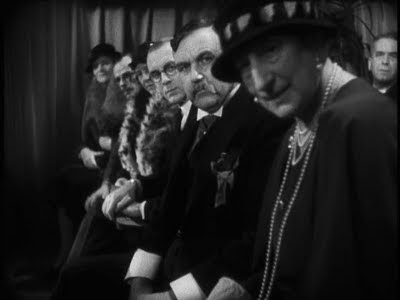 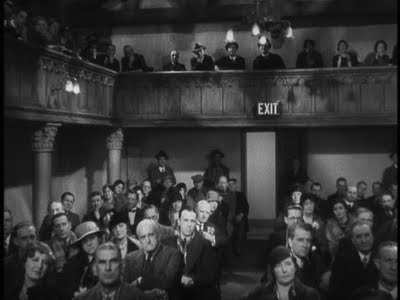 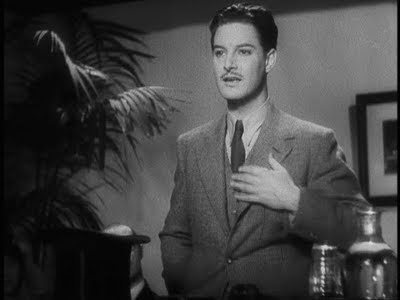 All eyes are on Hannay as he nervously makes the best of his nightmare.

HANNAY: That's an old-fashioned topic, especially for me because I'm not rich and I've never been idle. I've been pretty busy all my life, and I expect to be much busier soon. Have you ever worked with your hands? Indeed I have. I've known what it is to feel lonely and helpless and have the whole world against me. Those are things that no man or woman ought to feel. I ask your candidate and all those who love their fellowmen to set themselves resolutely to make
this world a happier place to live in. A world where no nation plots against nation, where no neighbor plots against neighbor where there is no persecution or hunting down, where everybody gets a square deal and a sporting chance, and where people try to help and not to hinder. A world from which suspicion and cruelty, and fear have been forever banished. That is the sort of world I want! Is that the sort of world you want? Fine! That's all I have to say. Good night!

(A pandemonium of cheering ensues as he "brings the house down.") 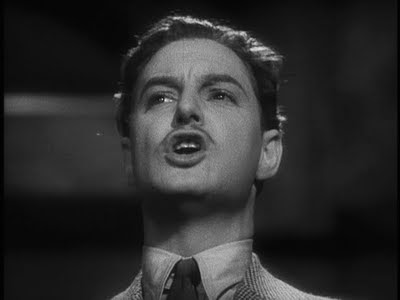 Hannay reaches the climax of his impromptu speech.
HANNAY (To the next speaker): I kept them going as long as I could. 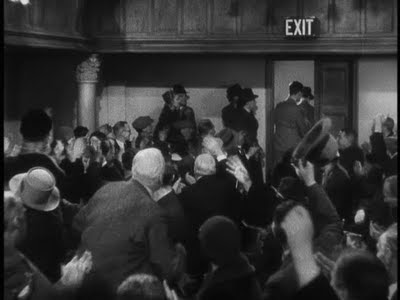 (Exeunt HANNAY in police custody as the throng continues to cheer his rousing speech. [See also Roger Thornhill's "performance" at an art auction in North by Northwest)
This scene has it all: Pitch-perfect comedy. An impassioned call for peace and common sense in a world that offered little of either. And a last-ditch cry for help from a hunted man who was lonely, scared and tired of running—and for whom time was running out. In other words, it is Richard Hannay’s finest moment.

Though to a much lesser degree, I’ve been in tough spots like that myself. So, probably, have you. A tip of the hat to Hitchcock for his powerful, nuanced depiction of these ideas.
Alfred Hitchcock Film History Film Philosophy Film Studies Joel Gunz John Buchan The 39 Steps

Ténèbres à la lumière... said…
Hi! Joel Gunz,
Congrat! and good luck!...when you speak on Tuesday in NYC and...
...Thanks, for the link to a month of events celebrating director Alfred
Hitchcock...because I ‘am giving away several items on me blog this month in honor of his birthday which was on August 13, 2009.