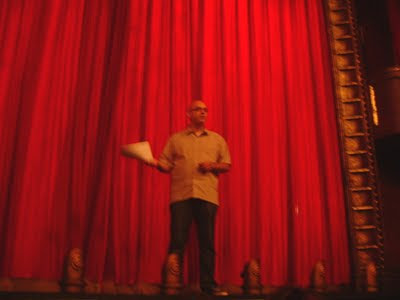 Sorry, my bloggy friends, about the lateness of this final post. Last week, I promised to share how my Talkback Tuesday presentation after the performance of The 39 Steps on Broadway went, but demands and deadlines from my professional commitments had other ideas. If you've been following my blog the last month or two, you'll have a good idea of what I talked about. Here it is in a nutshell:

"Just two days ago I was up on Oregon’s Mt. Hood, camping by the shore of Timothy Lake. My friends and I were all staring into the fire swapping ghost stories. I was reminded of a comment David Selznick once made about Alfred Hitchcock. “Not a bad guy,” the movie mogul said, adding “though not a man to go camping with.” Which is understandable. I can’t imagine that Hitch was much of a camper anyway. But if he was, I’ll bet he told a mean campfire story.

Alfred Hitchcock liked to say that he enjoyed stories with “multiple chases and a lot of psychology.” When he read John Buchan’s novel, The Thirty-Nine Steps as a teenager, he liked it so much that 20 years later he decided to make a movie out of it.

When the film came out in 1935, Hitch didn’t merely have a hit. He’d turned a page in history. A new cinematic genre was born: the psychological spy thriller—a double chase in which a lone everyman pursues his enemies while fleeing the authorities and more enemies.

I'm going to skip what I said over the next few minutes, because you can basically read all of that in my previous posts. So, let's skip to the conclusion. 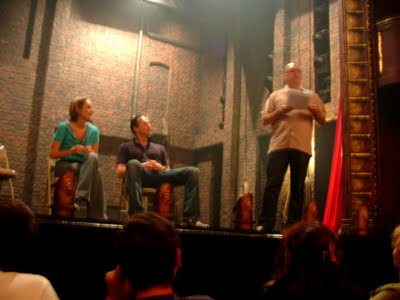 (Conclusion:) I wonder what [The 39 Steps author] John Buchan would think if he were at tonight’s performance. I like to imagine him attending the play with Alfred and Alma Hitchcock, elbowing each other at the gags and in-jokes they invented all those years ago. They might turn around to scan an audience that, even in this media-jaded era, still perches on the edge of its seats, rooting for the triumph and release of Richard Hannay.

Following my piece, two of the show's four performers, Sean Mahon and Jill Paice, came out and I moderated a Q & A session with them. 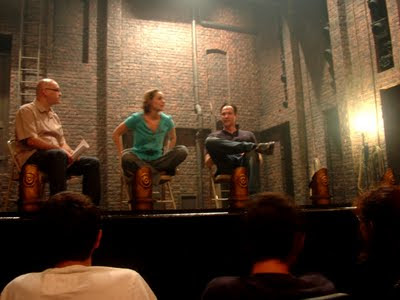 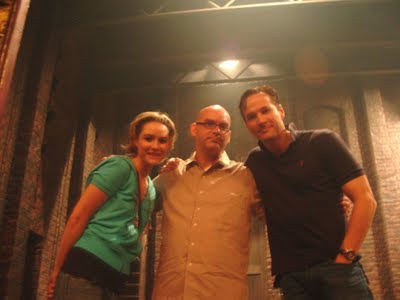 Afterward, they hung around and we chit-chatted about life, acting and our respective journeys. Turns out Jill is a bit of a Hitchcock aficionado herself, so we geeked out together for a while until it was time to head out into the sleepless New York City night.
Alfred Hitchcock Jill Paice Joel Gunz Sean Mahon The 39 Steps The 39 Steps on Broadway

Ténèbres à la lumière... said…
Hi! Joel,
I know this may sound like a cliché, but it appears that a good time was had by all...I must admit that Hitchcock's The Thirty-Nine Steps is my second favorite Hitchcock film.

The first is Hitchcock's The Lady Vanishes, but if I had to choose between the two films, it would be a neck and neck tie!

Joel Thanks, for sharing...your adventure in New York City with your readers.

Joel Gunz said…
Thanks for dropping by, Dee Dee! Who knows? Maybe there's a stage adaptation of The Lady Vanishes in our future!
September 29, 2009 at 1:33 PM