Review: The 39 Steps on Broadway

Posted by Joel Gunz on September 21, 2009
On September 1, I delivered the Talkback Tuesday presentation that followed the performance of The 39 Steps on Broadway. Here’s Part Two of the report. 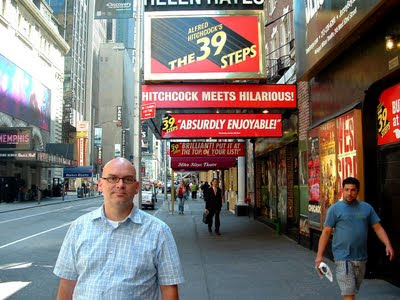 When Max and I arrived in New York, we had a few hours to kill before showtime. We dropped by the theater just to make sure we could find it when we needed to.
Step into the auditorium of the century-old Helen Hayes Theater, and you can sense the ghostly presence of actors past adding their mojo to the performances of today. The 597-seat theater itself is a signal that you’re in for a great show, even before the house lights come down.

This was the theater I had flown out from Portland, Oregon to see The 39 Steps in and then deliver my presentation.

Factoid: The 39 Steps is the only non-musical currently on Broadway. That unique aspect alone makes it well worth a visit. More than simply a stage adaptation of Alfred Hitchcock’s classic 1935 film, it was an homage to the director, with allusions to dozens of his other films sprinkled in throughout the play. Catching them all would make a great beer-drinking game.

With four actors taking on 150 characters in roughly two hours, it would seem that the show could spin out of control at any moment. Often those character changes occurred on stage with a simple change of hats — accompanied by a change of character, complete with accent and body language — as the actor oscillated rapid-fire between two personas. With a play this fast-paced, there wasn’t time for elaborate set changes. (It moves through a couple dozen separate scenes.) Instead, a row of steamer trunks in a train station magically become the interior of a rail car when the actors sit upon them and then morph into the boxcars themselves for a rooftop chase. Ingenious.

But if you're wondering why this non-musical play has thrived while others have closed, you can't look at at just the costume changes and and other vaudevillian touches. Like Hitchcock's MacGuffin, those tricks are just eye candy, something to give playgoers to talk about after the show. Ultimately, The 39 Steps relies on crisp dialogue (90% of which comes from the earlier film with another 10% tossed in just for fun) and first-rate performances from actors with chops to burn. And then there's the direction: this show isn't blocked so much as it is choreographed. Yet it never loses its spontaneity. A night out at The 39 Steps, is like getting an insurance policy from Allstate: you're in good hands.

After the play was done, it was my turn to take the stage. Check back tomorrow. I’ll give you the deets.
Alfred Hitchcock Joel Gunz The 39 Steps The 39 Steps on Broadway