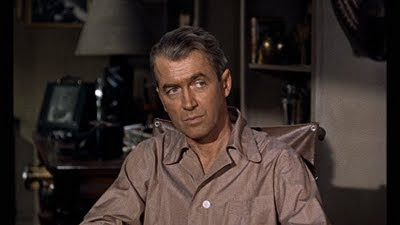 Quick question: let's say it's nighttime and you happen to walk by a a house with a light in its window. Have you ever looked inside, just to see what you can see? If so, you’re a peeping tom!

That's okay. Alfred Hitchcock said we all are. You're in good company.

Of course, there are different degrees of voyeuristic curiosity. It’s one thing to casually look. To hide in the bushes hoping to glimpse an undressing coed is something else. Still, what motivates even a glance? Isn’t that, too, a minor transgression? Doesn’t it betray a desire to peer, unwelcome and unnoticed, into another’s private life?


"The Observer [once called Rear Window] a horrible film, because a man was looking in windows. That was a crappy remark, because -- who cares? -- everybody is doing it. It's a known fact, providing you don't make it too vulgar, keeping it to a point of curiosity. I don't care who you are, you cannot resist it."

On that note, I’d like to introduce one of Hitchcock’s more important sources of inspiration: Edward Hopper.

Hopper has long been called a voyeuristic painter who stands outside, looking in at his subjects, often in private and at night. Naturally, that brings to mind Hitchcock, whose films often cover that same ground. For more thoughts on voyeurism and Hitchcock, check out my post from January, 2008. Rear Window is his testament on the subject.

Another connection: Hitch's movie was based on Cornell Woolrich's 1942 short story "It Had to be Murder;" Woolrich is frequently compared to Edward Hopper. 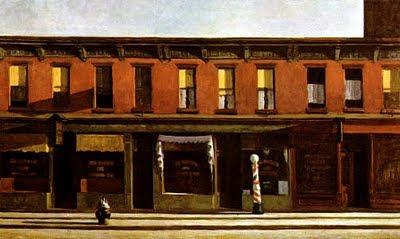 Like Hitchcock, Hopper is not just an producer of images. He is a narrator. As such, he insinuates himself into the frame in the same way that Hitchcock’s distinctive narrative voice pervades his films. In Early Sunday Morning, a scene as tightly composed as anything by Mondrian, the narrator stands at street level, looking objectively at a low-rent apartment building. A first glance doesn’t reveal much from the opaque windows.

But after a while, half-stories emerge.

Some of the shades are pulled tight, suggesting that the inhabitants of that room are sleeping in or hiding. Lace curtains suggest the presence of a female occupant, while, in others, austere shades suggest a bachelor’s home. Whatever the case, it is evident that there are real, individual lives going on behind those curtains and walls. The shop windows are dark, just as you’d expect on an early Sunday morning.

Rear Window and the works of Hopper are both concerned with isolation. In spite of its mixed-use real estate setting, Early Sunday Morning does not convey a warm, fuzzy sense of community. Likewise, in Rear Window, the occupants of the apartments are isolated from each other. 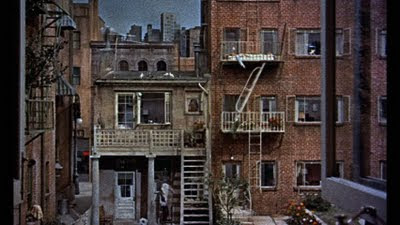 Jefferies' courtyard view in Rear Window reveals, at first glance, a mere battery of windows. But behind each one a story is being played out. 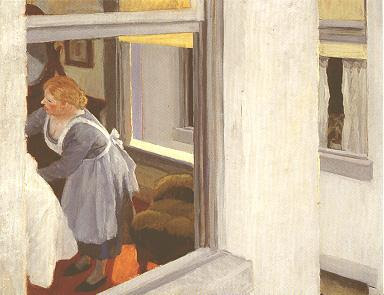 Apartment Houses is also generally regarded as another predecessor to Rear Window. Not only is the scene typically voyeuristic, but the apartment’s proximity to other buildings reminds us that it is less a home than it is a fishbowl. 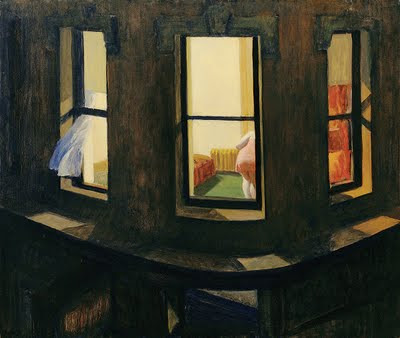 Many of Hopper’s night settings depict scenes from New York City (Rear Window is set in Greenwich Village) and Night Windows is no exception. The woman in this painting is completely unaware of the stage she is on -- and the front row seat its observer occupies. Its semi-erotic story is echoed in Rear Window, and it captures vividly the experience of living in New York: the thousands of lives and stories compressed into their homes, oblivious of the enormous world about them as they engage in the quotidian tasks of survival. 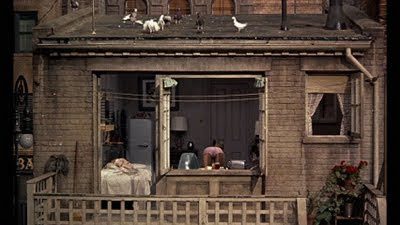 Rear Window's Miss Torso seems to have been inspired by Night Windows, right down to the pink costume and, uh, p.o.v. 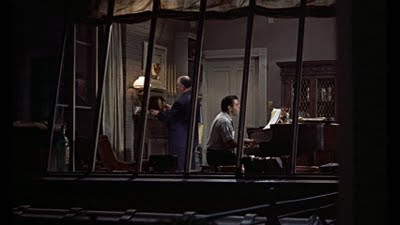 The director makes his customary appearance, winding a clock in the home of the composer, identifying himself as timekeeper, tension-ratcheter and orchestrator of the movie. 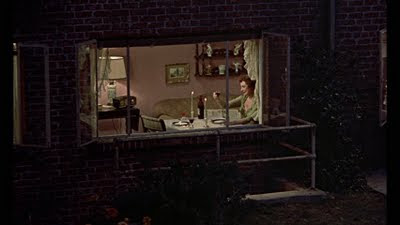 Miss Lonelyhearts raises a toast to an imaginary suitor.

The framing, lighting, colors and subject matter of each of these vignettes is similar to Hopper’s style. Really, Rear Window is a Hopper painting brought to life. 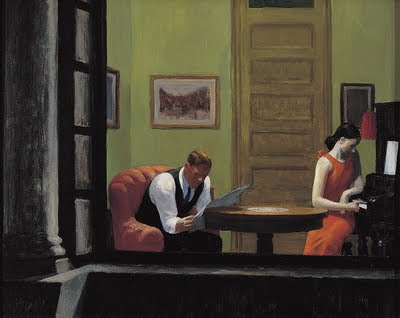 In this scene, the wife, dressed to go out for the evening, noodles listlessly on the piano while her husband, apparently just home from work, reads the paper. It’s a poignant scene of ennui and tension kept just under the boil. In Hitch's films, such boredom is often followed by turmoil or violence. It finds a parallel in the relationship between Lars Thorwald (Raymond Burr) and his bed-ridden wife. 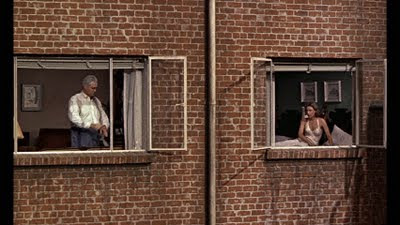 Lars and the corporeal girl.

Thorwald’s nagging wife cockblocks him at every turn in Rear Window. It’s no wonder we sympathize him even as the clues stack up, revealing his monstrousness. In Room in New York, the gulf between the couple is reinforced by the closed door; here it is represented by the expanse of brick wall separating Thorwald from his wife.

It’s widely assumed that Jefferies was based on Life magazine photographer Robert Capa, with whom Ingrid Bergman had once had a fling. The character is also reminiscent of Hopper, who, like Jefferies, hid in the shadows and observed his subjects. Hopper preferred to work from the relative seclusion of his car, whenever possible avoiding contact with the owners of the homes he painted. Like Hopper, Jefferies glimpses his neighbors in fleeting moments, constructing narratives based on the scraps of clues they inadvertently leave behind.

Conversely, there's a bit of Hopper in all of the couples in this movie, none of whom are exactly living happily ever after -- and who themselves can be seen as projections of Jefferies' own thoughts and fears about marriage. While Hopper's wife, Jo, remained faithful to him over the years, biographer Gail Levin noted that she could be very controlling. And jealous: she insisted on being his sole female model. Hopper suffered bouts of depression over the years, and many speculate that it had to do with his less-than-ideal marriage.

Oh, and did I mention that the Hoppers, like Jefferies, lived in Greenwich Village?

There is, however, one image that, to my knowledge, Hopper never committed to canvas. If his subjects ever caught him peeking, he never recorded it. But in Rear Window, Thorwald catches Jefferies in the act of looking. And when he looks straight across the courtyard at him, which is to say, the audience, in a subjective shot, it is one of the film's most chilling moments. The moral of Rear Window (if there is one) is that we are all voyeurs. Hitch calls us out on it. 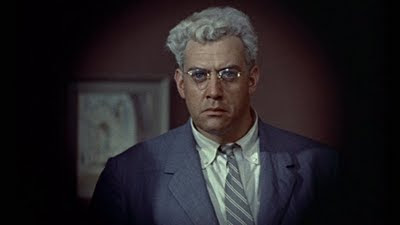 Anonymous said…
I remember when I first saw this film, I felt so genuinely involved in what was happening, I forgot it was a movie!

Haha, great use of 'cockblock' there.

I had not heard of Edward Hopper either until this post, thanks for the education.

Being an artist, (and having an interest in film noir) fortunately, I have been introduced to artist Edward Hopper, while in college.
Thanks, for sharing!
DeeDee ;-D
November 16, 2009 at 4:50 PM

Joel Gunz said…
Hey Janet - Thanks for your thoughts! Isn't that weird, about SNL? Several other strange personal coincidences came out of this post. Odd, isn't it?

Alexis said…
Love that you included the Ingrid trivia (of course)!

Here's a link to the SNL parody. It was pretty funny!
http://www.hulu.com/watch/109031/saturday-night-live-rear-window

Bob Howell said…
House by the Railroad certainly looks like the inspiration for the house in Psycho.

Anonymous said…
Alfred Hitchcock's camera-work in Rear Window has the same meticulous quality that is present in the paintings of Edward Hopper, very subjective.
August 6, 2011 at 6:56 AM

Kenney Mencher said…
This article was great. I have always felt that there was a connection between Hopper and film but it never occured to me that Hopper could have influenced film!
March 10, 2013 at 9:57 PM