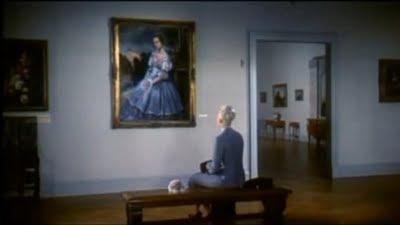 In Vertigo, "Madeleine" seems to face her ghosts of her past by visiting an art museum.
Watching an Alfred Hitchcock movie can be like going on the coolest Easter egg hunt ever. Spot the director’s cameo! Watch out for the domineering mother! Catch the Freudian symbol! Once you’ve tired of those games, you can move on to what I think is the best hunt yet: Spot the Art Reference!

Here’s one of my favorites, a scene from Vertigo, filmed at Big Basin Redwoods State Park, that was inspired by popular Classical and Romantic depictions of Adam and Eve leaving the Garden of Eden: 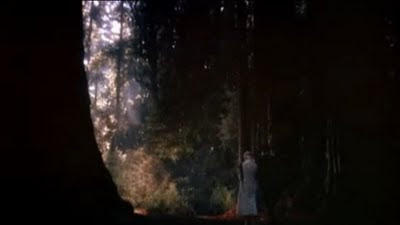 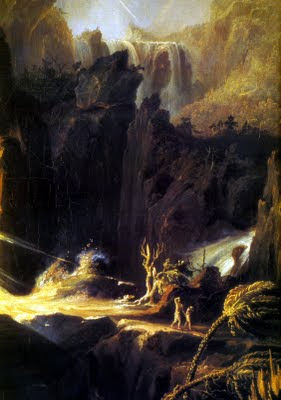 The exit of Scottie and "Madeleine" from the redwood forest is curiously reminiscent of classical paintings of Adam and Eve, like this one from Thomas Cole, circa 1827.
Hitch routinely dropped such artistic references in to his films. I've mentioned a couple of them in previous posts. For instance, take a look at my May 6, 2009 post from The Man Who Knew Too Much (1956) and comments I made regarding the dream sequence in Vertigo on May 29, 2007.

Are these mere Hitchcockian touches --- or was there more involved in these sometimes elaborate maneuvers? I think there's a lot to be explored here. Let's take a closer look at the Garden of Eden shot, above. To view it on YouTube, click here and move to the 3:40 point.

Vertigo is very much about art and beauty, and their power to hold us transfixed. So, it’s natural that art figures so prominently into the movie. (I’ll have to write a separate post about that!) So, what was Hitch up to when he added an Expulsion from the Garden shot in Vertigo? Was it just a gratuitous riff, like a jazz saxophonist alluding to another tune? Or did he have something more in mind?

Most paintings of Adam and Eve being expelled are unspeakably sad, mournful even. They are about loss of favor and of innocence. There is a sense of resignation and destiny. In Vertigo, The dreamlike scene that culminates in the Expulsion shot takes place in an ancient stand of gargantuan Redwood trees, --- more precisely, "Sequoia sempervivens, always green, ever living," as Scottie (James Stewart) says, and “the oldest living things” as “Madeleine” (Kim Novak) describes them. Clearly, it’s a reference to Eden. She goes into a trance in which she ‘recalls’ her own timeless past and then breaks down in tears, imploring Scottie not to ask her too many probing questions. It’s an intense, haunting scene. When it ends with the Expulsion shot, the effect is one of carefully attenuated release. The tension has been let out, but not the haunted, brooding, foreboding mood that Hitchcock wanted to maintain into the next scene. And so the Expulsion shot serves as the perfect transition piece as it slowly dissolves to the sea cliff at Cypress Point, where “Madeleine” surrenders to Scottie’s kiss. 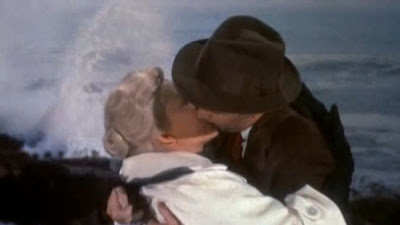 Whether or not audiences cognitively connect the scene to its artistic or Biblical origins is immaterial. I think Hitch trusted his audience enough to get the feeling such a scene conveys. That was the point. Any further explication is best left for undergrads and bloggers.

There’s lots of evidence that Hitchcock was consciously thinking about art history as he developed his films. Stop back and I’ll tell you why.
Alfred Hitchcock Film History Film Philosophy Vertigo

Alexis said…
I think Hitch's evolution into color-films probably motivated some of the throwbacks to art. I can't help recalling the small bit of trivia from "Rear Window" about Grace Kelly's dress--how it was unheard of to use black and white in the new color movies. I think that was a choice which artists like Hitch and Edith Head would have been able to reach, breaking boundaries and pushing the limits. Also- recalling that film, the structures of the windows and buildings are very framed and much like a museum, much like works of individual, different, pieces of art.
I look forward to the rest of your analysis. I agree with the look and the feel. I wouldn't be surprised if there was a lot of research done by production and Hitch and everyone with art- I mean it's in San Francisco and Midge is somewhat of an artist herself.
November 10, 2009 at 5:21 PM

Joel Gunz said…
Yeah, Grace is so luminous in Rear Window! Hitch once told an interviewer that "Color should start with the nearest equivalent to black and white." Also: "Color should be no different from the voice which starts muted and finally arrives at a scream." Another time he said, "Color, for a reason, not just color to knock people's eyes out. Make color an actor, a defined part of the whole. Make it work as an actor instead of scenery."

ratatouille's archives said…
Joel said,"Color should be no different from the voice which starts muted and finally arrives at a scream." Another time he said, "Color, for a reason, not just color to knock people's eyes out. Make color an actor, a defined part of the whole. Make it work as an actor instead of scenery..."

Hi! Joel,
What a very interesting review/look at Hitchcock and Art.
I think that Hitch, used colour to his advantage in the 1964 film Marnie too...I even like his use of "non-colour" in the 1960 film Psycho ...when it comes to actress Janet Leigh's slip change...representing her change of mood... between her good and bad deed.

..."There’s lots of evidence that Hitchcock was consciously thinking about art history as he developed his films. Stop back and I’ll tell you why."

I agree with you, wholeheartedly when it comes to Hitchcock and art being his inspiration. Because it is self evident in some of his films, that art was the inspiration.
Because I immediately, thought of your look at the 1958 film Vertigo…here:
Hitchcock's Vertigo


However, being an artist, I will return to find out exactly why you think Hitchcock was consciously thinking of art.
Thanks,
DeeDee ;-D
November 11, 2009 at 3:14 PM

The Meyer Twins said…
Wow this was very interesting to me. Me and my sister are Art major at our University and take several art history classes.....so this was right up our alley. We spend most of our time in those classes making art comparisons. You picked some really neat paintings. All of them seem to go with the theme of the movie. I really like the Thomas Cole painting of Adam and Eve. Loved reading this. I need to watch Vertigo today.

Joel Gunz said…
Sounds like you're following in Hitchcock's footsteps! He took art classes too!
December 28, 2009 at 7:59 PM