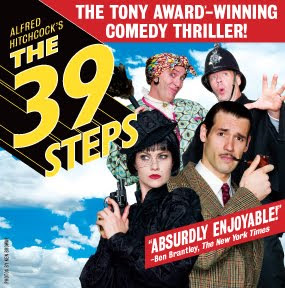 As you know, I have a rather soft spot for The 39 Steps in New York City. While the play has moved from its Broadway location at the Helen Hayes Theatre to an Off Broadway home at the New World Stages, the fact remains that a long-running hit is still drawing big crowds. As well it should!

Each year, they declare September to be Alfred Hitchcock Month, and 2010 is no exception. Visit the official contest site for more details and to enter. Hope you can join in. Here is the high level view:

HITCHCOCK TRIVIA CONTEST
Fans can test their knowledge of all things Hitchcock and The 39 Steps with the “Mr. Memory” trivia contest. The 39 Steps is giving away a great prize package to the fan who can answer the most questions of this classic Hitchcock trivia quiz. One lucky winner will win four orchestra tickets, a CD and a poster signed by the cast! Log on here to submit your answers.

FREE TICKETS!
Lucky number “39”! During the month of September, any person born in 1939 or who is currently 39 years old* can see the show for FREE! Simply bring a valid ID to the New World Stages box office (340 West 50th St.) to receive one complimentary ticket for any September performance. *For tracking purposes, “39 years old” qualifies as being born in the year 1971.

PRIZE GIVEAWAYS AT EVERY PERFORMANCE
Winners will be chosen at every performance of THE 39 STEPS during the month of September to receive prizes, including merchandise and signed posters by the cast.
Alfred Hitchcock Alfred Hitchcock Geek Joel Gunz The 39 Steps The 39 Steps on Broadway

Cynthia Fox-Giddens said…
This is pretty cool. I enjoy your blog and all things Hitchcock!
September 8, 2010 at 8:57 AM

Joel Gunz said…
Thanks much, Cynthia. I like your blog too, as I've spent the last couple of years simplifying my life and enjoying it each terrifying step of the way! ;)
September 8, 2010 at 9:16 AM