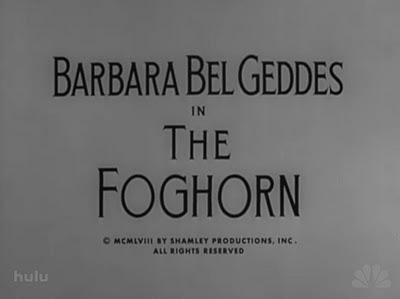 Though the 1958 Alfred Hitchcock Presents episode “The Foghorn” wasn't directed by Hitch, it's clear that he had a close hand in its development, as he did with many episodes in the early years of his TV show.
As mentioned in my previous post, Hitch's magnum opus, Vertigo, was very much in the air around Shamley Productions -- Hitch's TV production company -- when "The Foghorn" was being created. Based on a 1933 Gertrude Atherton short story of the same name, a quick comparison between that piece and the AHP episode shows us how Frank Gabrielson's TV adaptation could have been influenced by Hitchcock himself -- and how the short story could also have influenced Vertigo.

In Atherton's story, Lucia decides not to conceal from her lover “the awful truth that she read the Greek and Latin classics in the original text.” That detail is left out in the TV drama; instead, she and Bliss explore bookstores, and she reads this illuminating passage from Elizabeth Browning's poem “Not Death, But Love” -- which does not appear in the original story:

...Straightway I was 'ware,
So weeping, how a mystic Shape did move
Behind me, and drew me backward by the hair;
And a voice said in mastery, while I strove,--
"Guess now who holds thee!"--"Death," I said, But, there,
The silver answer rang, "Not Death, but Love."

This addition could have been suggested by Hitchcock, who liked to quote Oscar Wilde's dictum that "Each man kills the thing he loves." The poem hints at the pair's destiny, whose love was entwined with death. And that most definitely brings us back to Vertigo and its Liebestod theme of love that is fulfilled in death (which in turn originates in the myth of Tristan and Isolde, as hinted at by Bernard Herrmann's allusions to Wagner's opera of the same name.)

Based on the 1956 French novel D'entre les Morts (The Living and the Dead, 1956), Vertigo could be Hitch's most resonant, complex film, and its influences reach far beyond the book. Films as disparate as Marilyn Monroe's debut movie Niagara (1953; as I've pointed out) and Portrait of Jennie (William Dieterle, 1948, as Ken Mogg has shown) left their stamp on Vertigo. Its literary sources go all the way back to ancient Greece, with the aforementioned stories of Tristan and Isolde as well as Pygmalion.

I would add that Atherton's “The Foghorn” influenced the development of Vertigo. Surprisingly, scenes described in the story that didn't make it into the TV episode do show up in the movie. 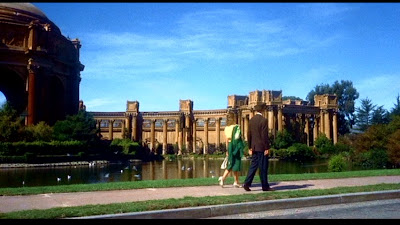 In this scene, Scottie and Judy walk by the Palace of Fine Arts, evoking the wanderings about San Francisco of Lucia and Bliss of "The Foghorn," who, after a lecture “in the Greek Theatre... imagine themselves in Greece of the fifth century B.C., alone in that vast gray amphitheatre, the slim, straight tenebrous trees above quivering with the melody of birds!” 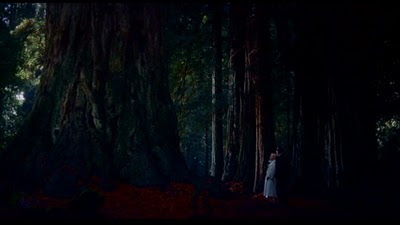 In a scene that doesn't appear in the French novel, Scottie and “Madeleine” explore the ancient redwood forest. That scene could have been lifted straight from Atherton's lovers and their meandering among “dim aisles of redwoods, born when the earth was young, whose long trunks never swayed, whose high branches rarely sang in the wind — unfriendly trees, but protective, sentinel-like, shutting out the modern world; reminiscent were those closely planted aisles of ancient races... forgotten races... god-like races, perhaps.”

Vertigo is a pastiche of 19th century romantic literature, taking that era's fascination with female dementia, spiritualism and classicism and viewing it through the modern, rational lens of James Stewart's Scottie Ferguson, "the hard-headed Scot." Throw a rock at a pile of Romantic novels and poetry and you'll likely hit a page that relates to Vertigo. For my money, Gertrude Atherton's "The Foghorn" is a very likely source.
Alfred Hitchcock Alfred Hitchcock Presents The Foghorn Vertigo