Hitchcock Gets His Hands on Blackmail

Posted by Joel Gunz on November 03, 2011
“Self-plagiarism is style.”--Alfred Hitchcock

For a full-length series of posts about Dial M for Murder, check out my mondo analysis!

One of my favorite shots in all of Hitchcock's movies appears in his 3D chamber piece Dial M for Murder (1954). Here's the setup: though Margot Wendice (Grace Kelly) killed Anthony Lesgate (Anthony Dawson) in self defense, suspicion has been aroused that she actually murdered him in cold blood. In this shot taken from her point of view, she makes a desperate plea for her innocence, holding out a key to her questioners that should exonerate her, but which, pathetically, does the opposite. 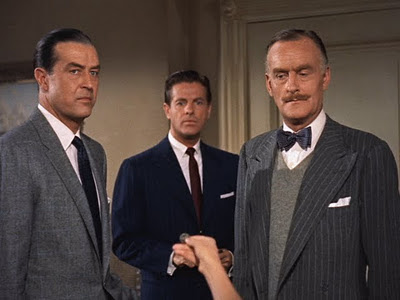 In 3D, her arm appears to float in front of the theater's front row, as if severed from her body. For my money, there are are few other moments in cinema history that telegraph such pitiful hopelessness, winning the audience's sympathy—and its dread for her future.

This shot also riffs on the film’s earlier murder where, in the 3D experience, Margot "reaches into the audience,” as if imploring it for help as she gropes for the scissors with which to defend herself: 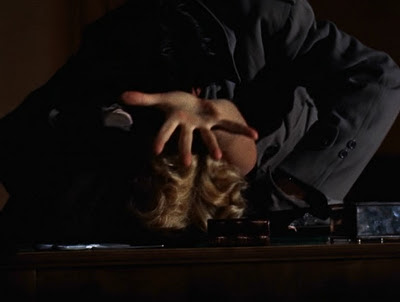 These two shots are among many in Dial M demonstrating that Hitchcock’s innovative and expressive use of 3D effects is unmatched. Which raises an interesting question: working with a new medium, and with no other filmmaker exploring 3D’s potential with his level of sophistication, where did Hitchcock get his ideas? From himself.

As it happens, versions of those two shots appear in his final silent—and first sound—film (he made two versions), Blackmail (1929). Like Dial M, that movie also explores the guilt of a woman who has killed her attacker in self defense. Take a look at its murder scene: 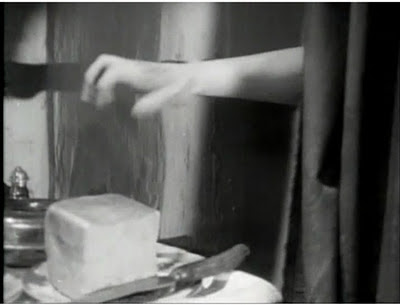 With the action hidden behind a curtain, we are left to imagine Crewe’s (Cyril Richard's) sexual assault on Alice White (Anny Ondra). (The situation itself augurs Lesgate’s rape-like attack of Margot on the writing desk.) In her desperation, Alice's hand fumbles about, eventually to grasp a bread knife. After her weapon finds its target, Crewe's dead hand then flops out from behind the curtain, completing this stanza of violence, which is mercifully hidden from us. The entire scene is expressed by the movement of hands and and is no less terrifying in its refusal to show us the details of the assault and of Crewe's subsequent death.

Later in the film, in a scene that anticipates Dial M, Tracy (Donald Calthrop), the film’s would-be blackmailer, comes to see that not only will his plot fail, but that he is going to be framed for Crewe’s death. Pleading for his life, he hands the blackmail note to Detective Frank Webber (John Longden), hoping—in vain—for mercy. Note how his hand protrudes in from the side of the frame: 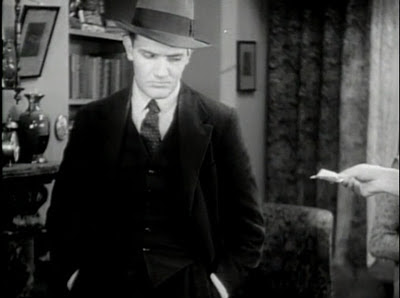 On a formal level, these repetitions add resonance to an otherwise tawdry story. As Sidney Gottlieb noted in his article “Hitchcock’s Silent Cinema,” which appeared in A Companion to Alfred Hitchcock, such shots in Blackmail "establish rhythmic and structural patterns by carefully placed repetitions that create constant echoing effects."

As with Margot, the framing here reinforces what the story is already bracing to tell us: Tracy hasn't got the chance of a sno-cone in a pizza oven. But there is more to this than mere technical film  grammar. Gottlieb adds: "Hitchcock's cinematic ingenuity is no mere formalist exercise but a means to strengthen Blackmail as a provocative critique of the forces of order and authority in society, a disapproving dramatization of how men silence women and attempt to shape them to suit their interests, and a case study in guilt."

Much the same could be said for Dial M. For instance, in the shot of Margot's hand above, the sense is reinforced that her beauty and wealth are no match for the male-dominated world that now casts a hostile eye on her—though in the final verdict, its law enforcement sector, at least, is more benign and prone to justice than that presented in the earlier film, even if its Inspector Hubbard (John Williams) had to go rogue and commit "highly irregular" acts in the service of justice.*

Blackmail was Hitch's farewell to silent movies, and in later interviews, in describing the end of that era, he singled out this shot, whose shadows paint a silent villain's mustache on Crewe's face: 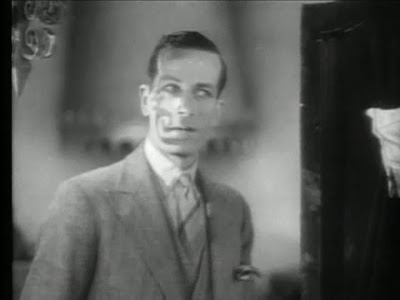 This effect casts a glooming spell on what has up til then been a light mood, wiping the smile off our face with one last joke. While I don't think Hitch did quite the same thing in Dial M, the plot follows a similar arc: for the first part of the film, Wendice's upper crust humor carries the show, rendering his murder plot an intellectual exercise. And then, similar to the shift in mood in Blackmail, the following brief (silent era) chiaroscuro scene abruptly changes everything, as Lesgate emerges from the shadows to carry out his diabolical orders: 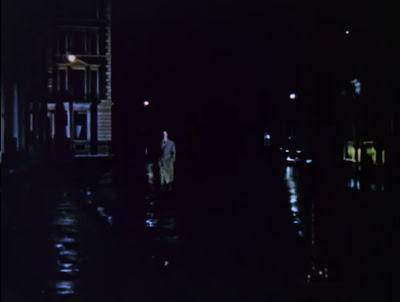 There is, however, at least one difference between the two films that I should mention. In Blackmail, these hands extend in from the side of the frame. Not so in Dial M. In that project, Hitch exploited the depth dimension to achieve similar emotional effects, giving those scenes an added subjective boost by placing his action toward the bottom of the frame, where the 3D imagery appeared to mingle with the front rows of he audience, as in this celebrated shot: 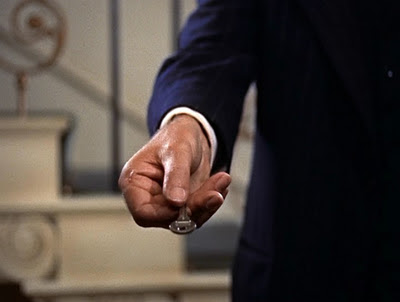 In another shot that echoes both the murder scene and Margot's plea for mercy, Inspector Hubbard presents the key that exonerates Margot and convicts the real villain, Wendice.


In order to make Dial M for Murder, Hitchcock rummaged around in a bag of tricks devised a quarter century earlier and adapted them to a new format. Along the way, he added a phrase or two to the language of 3D film and made an enduring favorite in the Hitchcock catalog. People may not be able to explain why a movie like this gets under their skin. All they know is they can't take their eyes off of it.
------
*Ever notice that Margot is the only female character to appear in Dial M? Only two other women are mentioned in passing: "poor Miss Wallace," the victim of Lesgate's murderous greed and Maureen, who's "such a filthy cook." By contrast, there are the men of Dial M, whose college breeding and club membership guarantee special privileges. Even sleazy Lesgate and daft Mark Halliday (Robert Cummings) are members of this fraternity of men. It's in this world that Margot must defend her life and honor. In the final reckoning, it takes a near-miracle to save her when Inspector Hubbard rises above class and the rules of the game to make sure justice is served.
------
Haven't had enough of Dial M for Murder? Go here.
3-D Movies 3D Alfred Hitchcock Blackmail Dial M for Murder Joel Gunz

DorianTB said…
Joel, your comparisons between the techniques and plot elements used in BLACKMAIL and DIAL "M" FOR MURDER were fascinating to read about! I thinks it's safe to say that Alfred Hitchcock used 3-D better than any filmmaker, even today with all the new whistles and bells available. You really put across the humanity as well as the gimmicks; even if I hadn't already seen and loved DIAL "M" FOR MURDER, your emotional brushstrokes really brought the subject to life. Great post!
November 6, 2011 at 12:08 PM