Dial M For Murder: The Greatest 3D Movie Ever Made

Posted by Joel Gunz on October 15, 2010
Watch clips of Dial M for Murder in 3D. You can even choose your preferred format!
This is the first installment of a five-post series about Dial M for Murder.
Part 1
Part 2
Part 3
Part 4
Part 5
Alfred Hitchcock just had to do things differently. So when Warner Bros. insisted that he make a film in 3D (a format he correctly surmised to be a dying fad), he as much as said, “Fine. But I'll do it my way.” The result? Dial M for Murder, faithfully adapted from a rather talky, but nonetheless gripping drawing-room play by Frederick Knott. The story centers on a retired tennis pro, Tony Wendice (played by Ray Milland, who replaced Cary Grant in the negotiations and whose performance gave the bigger star a run for his money), who, tired of his day job selling sports equipment, begins eyeing his wife's ample assets – her bank account, that is – and hatches a plan to murder her and make off with the inheritance. The film turned out be, far and away, the best exploration of the artistic potential of 3D film making ever, Jonas Brothers: The Concert Experience included. 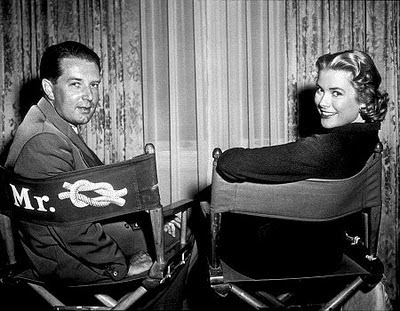 
Mid-century 3D movies tended to feature boulder-throwing lagoon creatures, laser-shooting space aliens, or spear-hurling, non-politically-correct ethnic groups, but Hitch would have none of that. Like his 1948 Rope, this movie takes place almost entirely inside a one-bedroom apartment. Rather strange locale, wouldn't you say? Other than the climactic scene where Margot Wendice (Grace Kelly) thrusts her hand into the front rows of the theater to grope for that lethal pair of scissors, the movie would seem to take little advantage the unique qualities of stereoscopic technology, circa 1954. Or does it?

Dial M for Murder might be the only movie that takes 3D seriously, moving it beyond its obvious novelty. That's what makes its setting in the enclosed space of a London flat so fascinating. As Hitch told Francois Truffaut, “I did my best to avoid going outside. It happened only two or three times, when the inspector had to verify something, and then, very briefly.” Thanks in part to its special effects, the film never feels claustrophobic. By the time the intermission rolls around, viewers will have seen every wall in the living room, from just about every conceivable angle. Out of those self-imposed spatial limitations emerged a veritable lexicon of three-dimensional cinematography. Too bad more film makers haven't read it. Yes, Avatar's James Cameron, I'm talking to you.

Hitch's intention was to “emphasize the theatrical aspects” and treat movie-going audiences to a night at the theater. Ambitious as that may have been, the film gave audiences much more: as the bi-lensed camera roved about capturing details that would be missed by a stationary spectator, viewers were given the uncanny sensation of ascending the stage to move invisibly among the characters, inhabiting the body of that most ghostlike or godlike voyeur, the invisible man. Amazingly fluid camerawork contributed to that impression: rarely locked down on the tripod for a static shot, it was constantly moving, subtly responding to drama placed in front of it. The 3D effects enhanced that experience, putting viewers in the midst of the action and placing the film in a long list of his films that explore the relationship between role playing and real life, theatricality and reality – and that uniquely Hitchcockian trinity of camera / director / spectator. 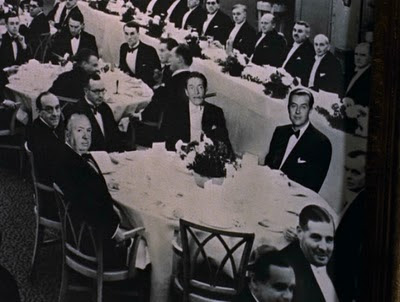 Hitch's customary appearance -- this time in an insert shot of a photograph -- accompanied by Tony's voice-over, who, pointing out Lesgate at the table, says: “There you are, with the biggest cigar in the business.” Can I nominate that for an Academy Award for "Best Line of Dialogue to Go Along with a Director's Cameo?" (I can't help wondering, too, if this 2D image was Hitch's subtle way of distancing himself from the 3D gimmick.)
I've pulled together a few screen captures that illustrate what I mean. Stay tuned for my next post, which will be stuffed with fascinating images and insightful captions.
Alfred Hitchcock Dial M for Murder Grace Kelly Ray Milland The Jonas Brothers

Cynthia Fox-Giddens said…
I enjoy your blog and this post was great. This is my favorite Hitchcock movie. So nice to meet other fans of this wonderful director.
October 18, 2010 at 3:31 PM

Romance Movies said…
Great post! The video really helps to illustrate your point! I am new to your blog, but I absolutely love Hitchcock. I am going to have to go back and watch this movie again thinking about what you have written. Thanks!
October 18, 2010 at 6:02 PM