Hitch and Klee at the Intersection of Artistic Invention 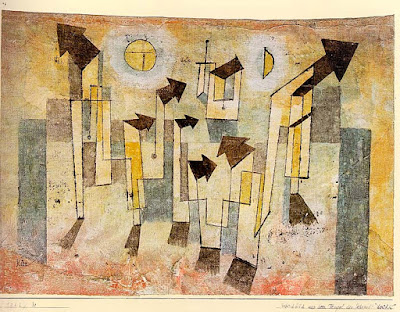 Mural from the Temple of Longing, Paul Klee, 1922 (Click to enlarge.) 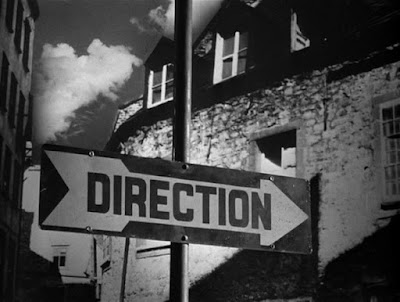 This is Part 2 in a series. The beginning is a very good place to start.

Alfred Hitchcock’s approach to filmmaking was unusual, if not unique. For him, the plot came in second behind a direct appeal to his audience’s emotions. As he said to Charles Thomas Samuels in 1972, “I’m not self-indulgent where content is concerned; I’m only self-indulgent about treatment. I’d compare myself to an abstract painter.”

Then, as if free-associating, he said: “My favorite painter is Klee.” An apt comparison. Klee, too, untethered himself from literal content and meaning, to explore his inner life as if it were a dream. For him, the line, planes and color were the content itself.

Despite the fact that these two artists worked in two very different mediums—one was a solitary painter, while the other ran a creative factory—they approached their work in a remarkably similar fashion—broadly, with an emphasis on form over content; specifically, in a variety of ways.

Hitch and Klee embraced modern art early on in their lives. Klee, though, was about 20 years older than Hitch, who would surely have read his books, such as Contributions to a Pictorial Theory of Form (1922) and On Modern Art (1924)—even if he’d had to struggle through them in German, in which he was conversant. Modernism was exploding right in front them and their minds buzzed with the freedom and new horizons that were opening up before them. It was an electric time to be alive—how 50s rock and 70s punk would be for future generations. Many followed these trends. A few led. But only a tiny minority was thinking through the meaning and ramifications of the powerful new creative tools at their disposal. Hitch and Klee were among those few.

Both laid enormous groundwork in the development of the twentieth century’s two definitive art movements: modernism and cinema. Klee wrote voluminously about art, supporting—and nourishing—his work as an instructor at the Bauhaus in Germany and, later the Düsseldorf Academy. Klee geek and museum director Douglas Hall wrote: “Many talked about a new relationship between art and nature; only Klee actually tried to define it, and with considerable success.” Along the way, he developed a modernist vocabulary.

Hitch, through his interviews, speaking engagements and occasional articles, generously taught his version of film theory. Released in book form, his weeklong conversation with French New Wave director François Truffaut became the Bible for all filmmakers who came after. Very few directors thought through the relationship between film and nature as deeply as Hitchcock did.

Klee's “Keyboard of colors”
Klee often spoke and wrote of art in musical terms. His diaries included entries like: “I am continually being made aware of parallels between music and the fine arts,” and: “One day, I must be able to improvise freely on the keyboard of colors: the row of colors in my paintbox.” During the 1910s, avant-garde artists all over Europe were exploring the relationship between art and music, and Klee, along with his colleague at the Bauhaus, Wassily Kandinsky, were at the forefront of it. Klee took those concepts one step further; many of his paintings actually look like sheet music brought to lyrical life.

Compare that with Hitchcock’s synesthetic description of pure cinema as “complementary pieces of film puttogether, like notes of music make a melody.” He would refer to high-angle shots as “tremolos,” a big-head close-up as a “sounding of brass” and a quick jump-cut as a “staccato movement.” He eschewed improvising on the set, likening it to a composer working with a “full orchestra in front of him and saying, ‘Flute, will you give me that note again? Thank you, flute.’” It’s tempting to imagine that he was drafting on those modernists’ theories to form his own. This isn’t the only time you’ll get that impression.

Time and movement
Klee saw his painting, not as a static product, but as an expression of time and movement. He famously said, “A line is a dot that has gone for a walk.” Elaborating, he wrote in his Creative Credo, “The act of viewing the work of art, too, is in essence, a function of time. The beholder focuses on one section after the other; he must leave what he has already viewed in order to be able to center his attention on a new area. The work of art, then, results from physical movement; it is a record of such movement, and is perceived through movement (of the eye muscles).” Klee’s art draws often attention to itself as time-based acts of creation. 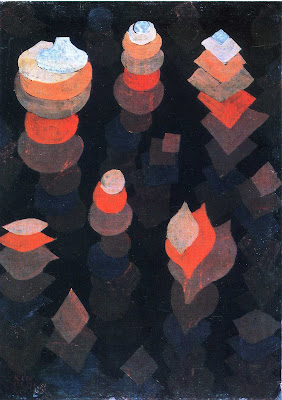 
Hitch also advocated what he termed the “moving-around principle,” in which the ideal cinematic form is the chase. “Just as the film—be it in preparation, in the camera, or in the projection booth—has to move around, so in the same way I think the story has to move around also.” (Cahiers du Cinema, 1959) For Hitchcock, the movement of the film through the camera is of one piece with the kinetics of the camera, the actors, their locations and of the motion of the projector itself. (This raises interesting philosophical questions about the meaning of motion pictures in a digital age, which bypasses all those mechanics except at the electronic level. New art theories are already arising: we may be headed into a post-Hitchcockian era!)

That all-embracing approach ties directly back to his—and Klee’s—Romantic notions of reaching out to become one with the universe. Hitchcock scholar Ken Mogg has pointed this out, connecting Hitchcock and Klee to 19th century Romanticists like composer Richard Wagner, philosopher Arthur Schopenhauer:

“I see Hitchcockian suspense as making an audience experience the Will, or an analogue thereof. Schopenhauer had noted the same thing of music. In a celebrated passage he wrote: ‘The effect of the suspension [consists of] a dissonance delaying the final consonance that is with certainty awaited; in this way the longing for it is strengthened ... This is clearly an analogue of the satisfaction of the [individual] will which is enhanced through delay.’ According to Christopher Janaway, many see this idea especially reflected in Wagner's composition of Tristan and Isolde (1865). So perhaps it's no coincidence that Hitchcock's favourite composer was Wagner, just as his favourite painter was Paul Klee—whose manifesto On modern art (1924) speaks of the artist embracing "the life force itself" in order to emerge into ‘that Romanticism which is one with the universe.’” 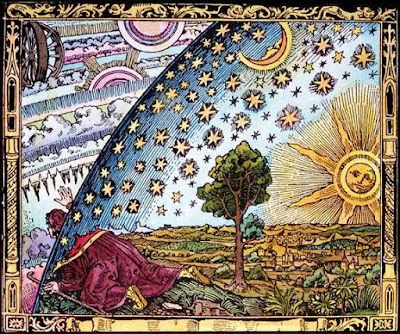 Flammerion engraving, artist unknown, 1888. (Click to enlarge.) Klee wrote in 1924: “Chosen are those artists who penetrate to the region of that secret place where primeval power nurtures all evolution. There, where the powerhouse of all time and space—call it brain or heart of creation—activates every function; who is the artist who would not dwell there?”

With his birds and fish and actors and masks, Klee didn’t necessarily introduce new subject matter to the art world. His more realistic images are reduced to cartoonish symbols; even to him, they almost seemed like afterthoughts, as he wrote in his diary in 1918: “Everything vanishes around me, and works are born as if out of the void. Ripe, graphic fruits fall off. My hand has become the obedient instrument of a remote will.” It was Klee’s intensely personal, fresh approach to those subjects that gives his art its enduring power.

Similarly, Hitchcock’s movies are usually melodramas wrapped in crime or espionage stories. How Hitch handled those boilerplate subjects made all the difference. His insistence on taking an original approach to them led him to perfect the psychological drama and even create whole new genres, such as the lone-man spy caper (The 39 Steps), the slasher movie (Psycho) and the modern disaster movie (The Birds). Hitch trusted his—and his collaborators’—creativity so much so that form dictated substance.

“I put first and foremost cinematic style before content…. I don’t care what the film is about. I don’t even know who was in that airplane attacking Cary Grant. I don’t care. So long as the audience goes through that emotion! Content is quite secondary to me.”—Cinema magazine, 1963

As a result, the works of Klee and Hitch both have the logic of a dream. Tomorrow, we'll compare some of their specific images to find what the French Canadians would call coïncidences fatales.
Bauhaus Flammerion Engraving Paul Klee

Anonymous said…
Great article! I recently purchased and watched a new Blu-ray edition of North by Northwest and I was totally blown away by what a gorgeous piece of pop art it is. I'd never seen the film in a theater, just cropped on TV back in the 80s, so it was like seeing it for the first time. Absolutely stunning. I, too, noticed all the visual references to 20th century modern artists splashed throughout the film in bold colors and witty compositions. I was grinning from ear to ear from first to last frame. Not only is NXNW one of Hitchcock's most purely entertaining movies, it's one of his most visually accomplished. If there were a Mount Rushmore of great modern artists, Hitch's face would be carved in it alongside Klee, Picasso, and Warhol.
January 2, 2016 at 11:09 AM