Alfred Hitchcock, Edward Hopper and "Shadow of a Doubt" 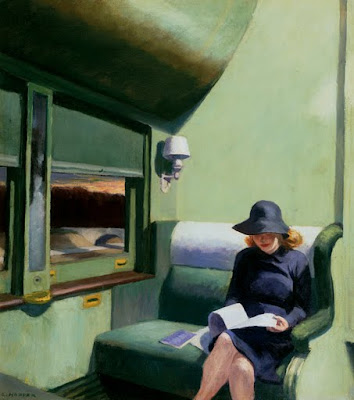 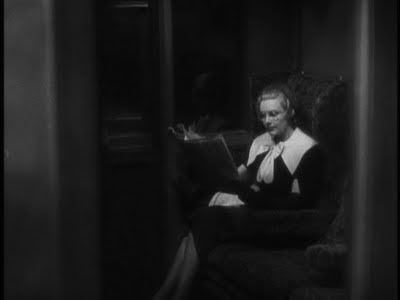 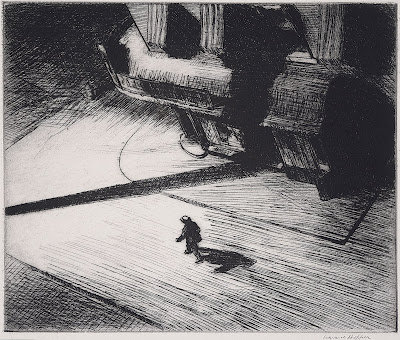 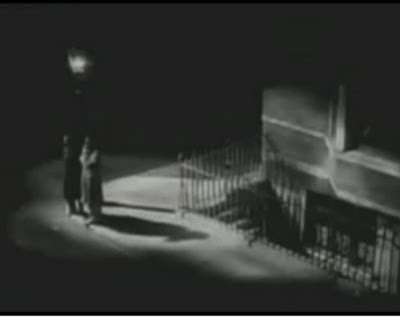 
"If you could say it in words, there'd be no reason to paint."
— Edward Hopper

"They were aroused by pure film."
—Alfred Hitchcock

In his day, Alfred Hitchcock had many thousands of fans. But of whom was Hitch a fan? Edward Hopper, among others. If you want to get a sense of Hitch's visual style, go buy a book on Hopper.

At the same time, Hopper, an inveterate movie-goer, had seen many of Hitchcock's films. In 1960, when he learned that Hitch had based the Psycho house on his House by the Railroad (1925), he was pleased and flattered. (I'll be talking more about that later.)

Of course, Hitchcock wasn't alone in noticing Hopper's cinematic virtues. Robert Siodmak, Orson Welles and Billy Wilder, to name just a few, also had Hopperesque visions. And there's every reason to think Hopper felt the same way about these directors, starting with the simple fact that his paintings were almost all horizontally oriented, with roughly the same aspect ratio as a movie screen. From the late 1930s and into the 50s, Hopper was very much in the air in Hollywood.

He remains a huge influence. There's more than whiff of Hopper in TV's Mad Men, the precise melancholy of graphic novelist Chris Ware and dystopian polish of New Yorker illustrator Bruce McCall. But let's get back to Hitchie, as his drinking buddies used to call him.

As the pictures above show, there are similarities in the way Hitch and Hopper created their images. I could fill several blog posts with more such instances. And I'm not just talking about composition or lighting. More importantly, the mood they convey is often the same. Take the frame shot of Pamela (Madeleine Carroll) aboard a train in The 39 Steps. Like Hopper's Compartment C, Car 293, the framing and her physical attitude convey not just alone, but lonely. The discreet distance set up by the camera placement conveys the sense that she is both available and distant—a contradictory message that crops up again and again in Hitch's films.

Voyeurism, loneliness, isolation: these are themes that Hitch and Hopper share, and they're easy to spot in their respective works. Hopper’s style—using a still, often unpopulated scene to tell a story—matches Hitchcock’s approach as well. My guess is that art-loving Hitch and film-loving Hopper traded notes—even if only in their imagination—on how to tell a story within a single, still frame. Regardless of how much time they actually spent thinking about the other, the results speak for themselves. Boston Museum of Fine Arts curator Carol Troyen has said: “Hitchcock did more to condition our perception of Hopper than anyone else.” 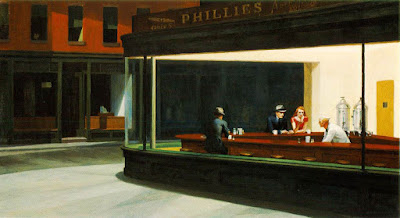 "Hopper is always on the verge of telling a story," observed John Updike, and the half-stories he told were often tinged with melancholy, if not malice. Maybe that’s why he had such a huge influence on film noir, his famous Nighthawks standing out as a manifesto of the film noir aesthetic. Hopper biographer Gail Levin notes that sources for the painting include Van Gogh's famous Night Cafe, along with dozens of gangster movies in the 1930s. Specifically, he was inspired by Ernest Hemingway's short story "The Killers." Thus, when Robert Siodmak brought that story to the screen, he aped Hopper's painting in the opening scene: 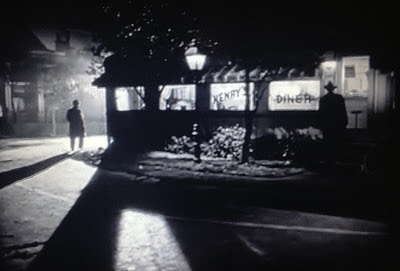 Even Hopper's sunniest canvasses contain a hint of nocturnal menace. Maybe that's why Hitch, who preferred to deal with evil in broad daylight, as opposed to the neon-lit subterra of noir, was a fan.

In 2008, London’s Tate Modern hosted a major Hopper exhibition while simultaneously presenting a film festival that expressed the spirit of Hopper's artwork. Among the films shown was Hitch’s noir masterpiece Shadow of a Doubt (1943). Note a couple of interesting comparisons that illustrate how the two men possibly "conversed" over art. 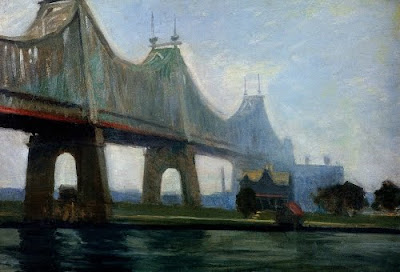 Queensborough Bridge (1913), a depiction of the then-new Manhattan- Queens bridge, draws viewers' attention to the isolated life of a mansion whose once-grand view and property value have been diminished. 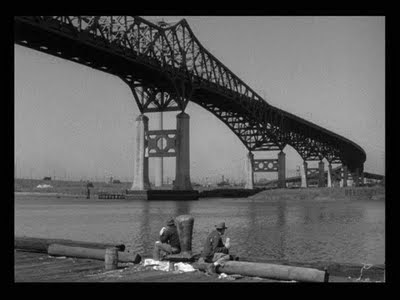 Taking a break under a span of the Pulaski Skyway connecting Jersey City to Newark, these hobos in Shadow of a Doubt are a long way from the film's quaint primary location, Santa Rosa. 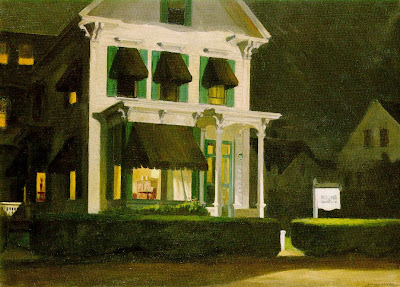 Some writers have suggested that Room for Tourists influenced the cinematography of Shadow of a Doubt. But, ahem, since it was produced two years after the movie came out, that seems unlikely. Did Hopper have that movie in mind when he painted Room for Tourists? Now that's entirely possible. With its dark awnings and eerie electric lighting, his boarding house is ambiguously nostalgic, yet slightly sinister; hospitable, yet off-putting. This isn't your ordinary bed and breakfast.

In like manner, it seems that Hitch may have pondered such evocative Hopper paintings as Early Sunday Morning (1930) when he and Our Town author Thornton Wilder worked the Newton house into their screenplay. 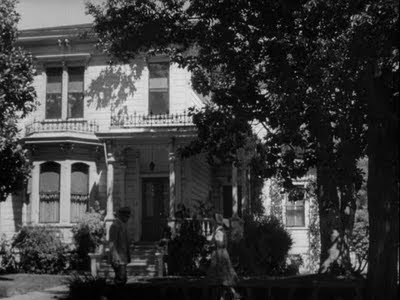 The Newton residence, where the Merry Widow Killer, Uncle Charlie (Joseph Cotten), comes to seek refuge from the police.

The film constantly returns to the exterior of this house, during the day and at night, viewing it from various angles. Each time, the house itself furthers the story along. It’s a character unto itself, or, as Emma Newton (Patricia Collinge) says: “[The house] owns us. It seems to me no sooner do I get one thing fixed, then something else gets broken. And then it needs fresh paint.” It's as if she were talking about a lovable but ne'er-do-well relative.

Like a Hopper painting, Shadow's story is often told through windows, if not by the windows themselves. Lights switch on and off, revealing plot details that a lesser director would portray using more pedantic methods. 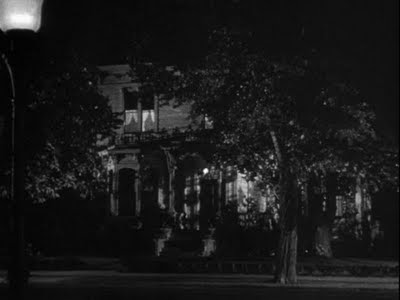 In the scene above, we see various house lights go out as the Newton family turns in for the night; one light -- Uncle Charlie's -- remains on, to chilling effect. Such highly effective silent visual devices are a reminder that Shadow is reminiscent of Hitchcock's silent breakout film, The Lodger (1927), in which Ivor Novello, thought to be the blonde-killing Avenger, comes to stay in a London boarding house. 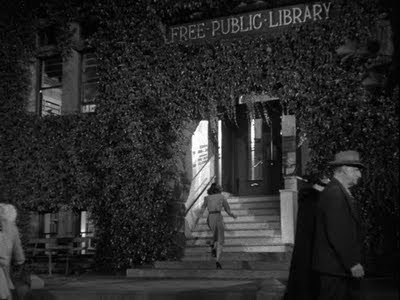 As Young Charlie (Teresa Wright) races up the stairs to the library, we see its lights going out for the night, signaling that she may be too late. Those darkening lights, then, create suspense.

Hopper’s plein air paintings also speak to the human psyche. In this regard, there is one painting that especially stands out: Captain Upton’s House.

Does Captain Upton's House hint at some of the ideas about family that Hitch explored in Shadow of a Doubt? Stripped of any human presence or ephemera, nothing in this painting is left to chance -- including color, angle, framing and so on. The juxtaposition of the light tower and adjacent house suggest that this is a domestic scene. Freudians could have a heyday conjuring up the phallic connotations in the light tower. I’m sure they have. Still, the purely functional design of the lighthouse, placed next to the gingerbread embellishments on the house itself suggest that the man and woman who live here have two distinct, clearly defined roles. A more picaresque painting might foreground the lighthouse. By painting the scene from an angle that situates the family house in front, Hopper's subtle implication is that, important though the (male) lighthouse keeper may be, it’s the wife who takes charge in the home.

Hopper faithfully reproduced the tidy, yet less-than-perfect condition of the house’s paint and roof in coarse brushstrokes. This spic-and-span house is lived in, though its loneliness and isolation could leave us wondering how vibrant the life of its occupants is.

And so it was with Shadow of a Doubt. The mother, Emma (Patricia Collinge), ruled the roost, though her rather denatured husband was the breadwinner. In fact, between Emma, Young Charlie (Teresa Wright) and Ann, none of the men in the movie stood a chance! And let's not forget that Hitch selected the actual house in Santa Rosa for his location filming because it, like Captain Upton's house, was just slightly down at the heels.

The point of all of this, I feel, is that both Hitch and Hopper were trying to convey feelings, or a sense of the human condition that can't necessarily be expressed in words. We use placeholder terms, such as "loneliness" to try to describe such things, but they're beyond our grasp. 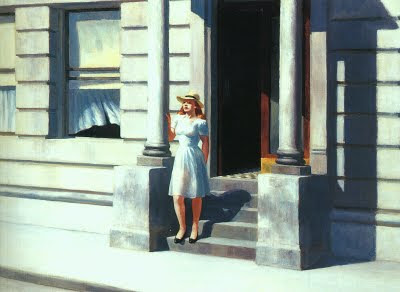 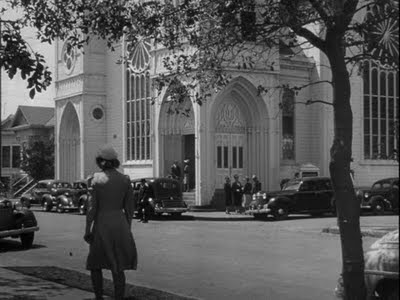 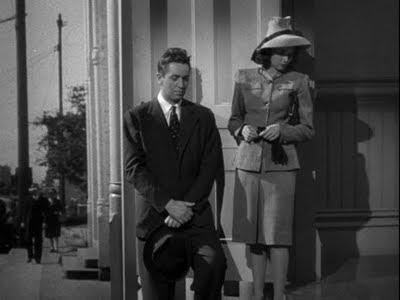 This scene at the end of Shadow of a Doubt strikes a Hopperesque note, which Hitchcock historian Donald Spoto describes this way: "If young Charlie aspires to a happier life, she realizes now that it can only be striven for in a tangled, fallen garden that is no longer a paradise." He might said of the girl in Summertime, above, which incidentally, was completed the same year that Shadow of a Doubt came out. Which came first?

An aspect of both Hopper's and Hitch's vision is nostalgia. Both artists frequently hint at a (supposedly better) past. For instance, Uncle Charlie's homecoming is a nostalgic event, and he and the Newton clan spend much of their time looking at old family photos.

It's easy to get drawn into a discussion about whether the past was indeed better or not. But I don't think that was necessarily on either artist's mind. I think they simply wanted their audience to feel nostalgic as an end in itself. Nostalgia may not even really be the right word. Maybe a more appropriate word is the Portuguese saudade, which describes yearning or a longing for a past (Youth? Eden? A golden age?) or a homeland or a love that has ceased to be. Saudade transcends the "good old days" sentimentality of nostalgia and approaches something that is more like pure feeling. Brazilian composer Antonio Carlos Jobim used it to describe both the bossa nova of the 1960s and the American Blues.

I feel that Hopper and Hitch aimed to get at that poignant sense of longing, or saudade, in their art. More than any similarity in technique or subject matter they might have had, this common aim is what I believe fueled their mutual interest. Hopper did it through paint, Hitchcock, by means of film. For a closer look at Hitch's "Lost Paradise" themes, check out my June 3, 2009, post.

Okay, so much for Shadow of a Doubt. Possibly the most important Hitchcock-Hopper connection occurs in Psycho. Stay tuned.
Alfred Hitchcock Car 293 Compartment C Edward Hopper Night Shadows Shadow of a Doubt The 39 Steps

seang1979 said…
Wow. I have seen Shadow of a Doubt several times and never knew how many art influences there are in his films. This is really intersting stuff for another lifelong hitchcock geek like me.
November 18, 2009 at 6:27 AM

Anonymous said…
this comparision is beautiful! I saw Hopper's paintings last spring and am crazy about them. also Shadow of a Doubt is one of my favorite movies. thanks for your insight!
November 18, 2009 at 9:54 AM

Ténèbres à la lumière... said…
Hi! Joel,
I ‘am familiar with all the images that you included in this post and because I’ am familiar with Hitchcock, Hopper, Wilder, etc, etc, etc all you are doing...for me at least is filling in some of the blank spaces.
By the way, I read your post 2 days ago, and after reading your post I stepped away for a couple of days to contemplate your post…what a very interesting post!

Thanks so much for dropping by with your comments! I'll be doing one more post on the subject and then will give Hopper a break. Let me know what you think!

Anonymous said…
Funny I've loved Hitchcock and Hopper for many decades but had never put two and two together.It all becomes so blindingly obvious!I too am going to digest and consider. Both 39 Steps and Shadow of a Doubt are in my top ten films.That birds eye night view of the street corner is so evocative. Thanks Joel.
August 4, 2020 at 7:26 PM