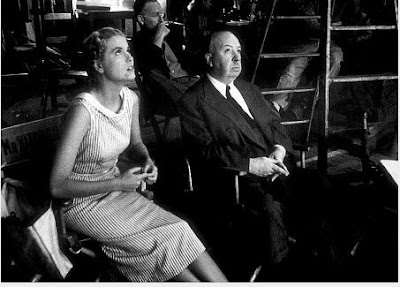 For Alfred Hitchcock, shooting a film in 3D was "like going into the boxing ring with your hands tied behind your back," as Grace Kelly put it. Still, "I never saw him lose patience -- he never became angry... when the technicians said, 'Oh, no, with the [3D] camera we can't do this and we can't do that.'"
This is the fourth installment of a five-post series about Dial M for Murder.
Part 1
Part 2
Part 3
Part 4
Part 5

Alfred Hitchcock lived by the credo that you should let the audience in on as many secrets as possible. That was the basis for his stock-in-trade: “You have suspense when you let the audience play God,” he once said. By showing viewers the Wendices' London flat in Dial M for Murder from every angle and under a variety of lighting conditions, Hitch drew the audience toward him, the storyteller, as if purring in their ear, “Here, let me show you this... and now this...” all the while withholding other information, such as incriminating evidence that, if revealed, would cause the tension to unravel. In that way, Hitch toyed with the audience, bringing it closer, then pushing it back. Those fencing-off framings discussed in my October 26 post (number three in this series) work to similar effect: in the 3D format in particular, they make the audience feel distanced from the action.

The audience was also made privy to the nature of Tony Wendice's ego, displayed with plummy assurance by Ray Milland. Though he aspired to be the mastermind behind a perfect murder, Tony committed several blunders. In the very first scene, over breakfast, he tipped over the salt and pepper shakers, throwing a pinch of salt over his shoulder for luck. It didn't help, for the gesture was undone later during his meeting with “Captain” Lesgate (Anthony Dawson) when he adopted a phony limp, practically daring fate to strike him with a fatal flaw. Having over-wound his watch on the night of his murderous directorial debut, it stopped, throwing off the timing of his phone call and his assassin's choreography. Finally, he lost track of the confusing paths of Margot's and Lesgate's latch keys – the last tactical error dooming his perfect murder to failure. As Mark had inadvertently predicted, he 'made a stupid mistake and didn't realize it until everyone was looking at him.' 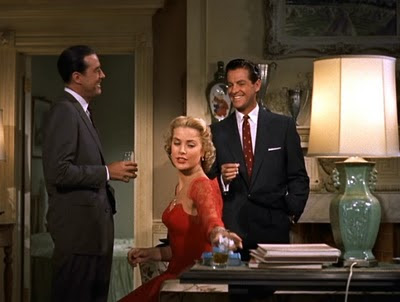 Smug, with a perpetual canary-eating grin on his face (and a foil to Mark's shit-eating grin), Tony's hubris was to imagine that he could commit the perfect murder and get away with it.
The similarities between Dial M and Hitch's other “perfect crime” film, Rope (1948), are telling. Based on successful plays, both films feature tight plots, flawlessly engaging dialogue and interesting characters. Hitch could have shot them using traditional techniques and ended up with two perfectly good movies. Instead, he took technical risks, all the while aiming for perfectionist standards. While Rope boasted its legendary long takes, Dial M pushed the limits of 3D cinematography far beyond what anyone else has done before or since. I would argue that Hitch, like Tony, was indulging in a bit of grandstanding – though never gratuitously. With Dial M, however, he paid a price. Drawing from his experience in the 1920s with German filmmakers who sometimes “photographed their films at odd angles and even built their sets at odd angles,” as he described it to a reporter in 1973, Hitch devised a number of challenging camera setups, including some that required that he shoot up through a hole in the floor. Unfortunately, during production, the execution of many of those shots was thwarted by the limitations of the giant bi-lensed 3D camera that lumbered about his sound stage. (One visitor to the set jabbed Hitch with the query, “Is that your dressing room?”) That said, there is one shot that's worth noting. Prior to the above-described murder scene, we see a close-up of Tony's fingertip gliding into the dial of a rotary phone. The camera couldn't get in close enough to capture that shot, so Hitch ordered up a giant wooden finger and an oversized phone dial. Slow the film down and you can almost make out the paint brush strokes on the giant stump.

There's one reason why I know this. As with many Hitchcock films, I've watched much of Dial M in “frame advance” mode. (Subsequent research confirmed my observations.) Another is compulsive re-viewing. A film even more perfect than the murder it portrays, Dial M rewards such OCD geekery. When it was re-released in 3D several years ago, knowing I might not see it in its original format for a while – even in 1954, it was released as a “flattie” in most theaters – I attended every screening until finally Jimbo, the doorkeeper at Portland's Cinema 21, began letting me in for free. God, I love that theater.

According to notes scribbled during the better-lit scenes, it was only after the third consecutive viewing (Thursday, 7 p.m.) that I saw Tony inadvertently knock that Freudian salt shaker over. It was only after the fifth viewing (Saturday afternoon matinee, 4 p.m.) that I noticed that the Wendices' otherwise tastefully decorated home also housed a ratty old armchair – completely incongruous with the rest of the furnishings, yet clearly Tony's favorite spot, by the fire. I would suggest that this was a holdover from his bachelor days. I can even see a family quarrel, taking the story in a slightly different direction:

MARGOT: Oh, Tony, honestly, let's get rid of that raggedy old thing. I saw a perfectly lovely wingback at this wonderful shop on Albemarle Street....

TONY: For the last time, Margot, this chair stays! (TONY takes a sip from his martini resolutely, as if biting the apple in Eden. His gaze turns to a photo on the wall, the wheels of his mind turning slowly, thoughtfully.)

TONY: Maybe you're right. Margot, honey, why don't you go back to that shop and talk to them about having that new wingback or whatever it is delivered here?

TONY: I know what I said, but let's forget all about that, shall we? After all, it's only a piece of furniture.

TONY: I'm sure I will. Now run along and buy the blasted thing before I change my mind.

MARGOT: Aren't you coming with me?

TONY: I'd love to darling, but I have some business I need to attend to. (Though his paternal smile remains fixed, a hooded look comes over TONY's eyes.)

Juliette said…
Watched Dial M again last night, first time in years - realised I have seen the remake of A Perfect Murder (with Michael Douglas and Gwyneth Paltrow). I too picked up on the shabby chair (female thing)but missed the salt shaker. Everyone twitched those curtains though! I had it in my head that Tippi Hedren was the female lead. Enjoyed it immensely, especially after reading this blog and looking for your points.
November 8, 2010 at 6:05 AM