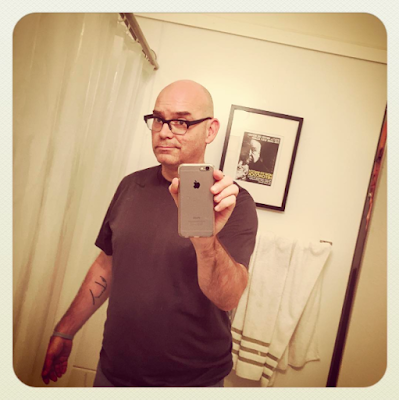 I recently sat down with myself in my living room in Northwest Portland to talk about Alfred Hitchcock’s life and films, and how he’s come to be viewed by history. I'd mixed a cavernous snifter of cognac and Drambuie—a drink that Stephen DeRosa notes was one of Hitchcock’s favorites—and offered to make one for myself. I politely declined.

A notoriously prickly interview subject, today I was feeling expansive and was completely at ease talking to myself. Also, I kept slurring my words. Here are the highlights of my fascinating conversation.

Joel Gunz: Let’s start out with a few of the most common questions that people ask when they find out that I’m a Hitchcock geek. Going back to the beginning, how did I become a Hitchcock Geek?

Alfred Hitchcock Geek:
It all started when I was about 12. My stepdad told me about this director who could manipulate his audience's emotions and create suspense just by the way he edited his films. That captured my imagination, and right around that time, an interview with Hitch from 1964 aired on PBS, where he  explained his techniques. I recorded that show on a cassette tape and listened to it over and over; it was several months before I actually saw my first Hitchcock film, so I was actually a geek before I'd even seen any of his movies. Then, a few years later, I watched Vertigo on the big screen, and that sealed my doom. 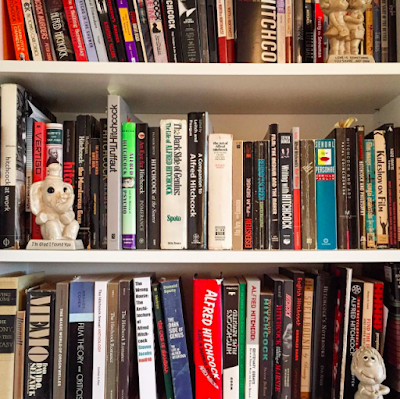 JG: What is my favorite Hitchcock movie?

AHG: Short answer: Vertigo, the greatest film ever made.

Longish answer: all of them. One of the pleasures of watching Hitchcock is that his 54 films can be experienced as one long movie, stretching over half a century from the silent era to the American “New Wave” of the 60s and 70s. The themes and subjects of his films are all there in his early work, and he brought them into deeper focus as the years went by. Over and over again, characters that he introduced in one film would be resurrected later on, giving the viewer a sensation of the uncanny: Hitch doesn't merely repeat himself, he reincarnates his characters from one movie to the next. For that reason, even his lesser-known movies are “essential” to a full Hitchcock experience.

JG: What’s up with his obsession with blondes?

AHG: [I pause before responding, swirling my enormous goblet thoughtfully.] Hitch wasn’t obsessed with blonde women per se; but like many gentlemen, he simply preferred them. He famously said, “Blondes make the best victims. They're like virgin snow that shows up the bloody footprints.” But there’s more to the story than that.

After all, some of his leading ladies were brunettes [Teresa Wright, Shadow of a Doubt, Karen Black, Family Plot; Audrey Hepburn, No Bail for the Judge (unfinished)]. One of his favorite leading ladies was light-auburn-haired Ingrid Bergman [Notorious, et al.]. Tallulah Bankhead's hair was light brown in Lifeboat.  Hell, he even featured a redhead once [Shirley Maclaine, The Trouble with Harry]. So it wasn't blondes he was after, but, rather a certain type of woman, which he described to François Truffaut:

Hitch: “You know why I favor sophisticated blondes in my films? We’re after the drawing room type, the real ladies, who become whores in the bedroom.  Poor Marilyn Monroe had sex written all over her face, and Bridgette Bardot isn’t very subtle, either.... Sex on the screen should be suspenseful, I feel. If sex is too blatant or obvious, there’s no suspense.”

Truffaut: “What intrigues you is the paradox between the inner fire and the cool surface.”

Hitch: “Definitely, I think the most interesting women, sexually, are the English women. I feel that the English women, the Swedes, the Northern Germans and the Scandanavians are a great deal more exciting than the Latin, the Italian and the French women.

Given his preference for a Northern European mystique, Hitch naturally ended up populating his films with more blondes.

JG: I just quoted that interview from memory. I'm impressed.

AHG: Thanks. [I suppress a smug smile by taking a long pull from my drink.]

JG: Why do I call him Hitch?

AHG: He asked all of his friends to call him Hitch. And, studying him for most of my life, I feel a certain kinship with him. You know how it is. You take up a hobby. And the more you get to know it, the more fascinating it becomes. Hitch became quite fascinating to me. In fact, there are times when I feel he almost belongs to me.

JG: Was Hitch as abusive of the women in his films as the media has sometimes made him out to be?

AHG: [My voice rises in exasperation.] Look, Hitch was an Artist, with a capital A. As such, he was uncompromising in his efforts to bring his personal vision to life. He could be manipulative—even mean—if that was what it took to elicit a desired performance from one of his actors. But he could also be very indulgent. The point is, to do great things, you sometimes have to be willing to make choices that other people would shy away from, okay? You have to be ruthless in your pursuit of your art. Is that cruelty or courage? Maybe both. Hitch probably saw himself a one of the select few who could play by his own rules. The high stakes world of big-budget moviemaking is, at its core, an art. And, as Rope’s Rupert Cadell might say, “The privilege of directing superior films is reserved for those few who are really superior individuals.” And those who fall under the director’s sway? “Inferior beings whose lives are unimportant anyway.”

Of course, I’m joking. But still…. [I pause to gulp my cocktail.] [Nearly shouting.] Was he a megalomaniac if, after all is said and done, he created the greatest body of cinematic work the world has yet seen?


JG: Determined to get drunk, aren’t you?

Audrey Hepburn in How to Steal a Million (1966). Says I: "Audrey backed out of No Bail for the Judge while it was in preproduction. Hitch never forgave her, and she never gave up trying to make a Hitchcock film."

JG: But look at the way women are treated in his films. Doesn’t that show he was a misogynist?

AHG: No! He subscribed to the time-honored theory that the best way to create sympathy for his female leads was to put them in danger. So he hung them from cliffs, sent them to sleep with the enemy and pelted them with birds. But bloody hell! Their heroism won out. Every. Goddamn. Time. His female characters were fascinating, not because they’re in “celluloid” danger, but because they were strong. Heroic. His male leads tended to be far weaker and morally squishy. Hitch’s movies are the opposite of misogynistic.They’re actually some of the best examples of feminist moviemaking to come out of the classic era, a time period in which female leads were reduced to either two-dimensional sexpots or demonic femme fatales.

Jesus Christ, man! Even his personal life shows that he had deep respect for women. He was devoted to his wife, Alma, and valued her opinion over all others—even his own. His inner circle—the Hitchcock brain trust—included Alma, Peggy Roberston, Joan Harrison and his own daughter, Pat, and he trusted them implicitly. When it came to his views and relationships with women, Hitchcock was way ahead of his time. And I can quote me on that. [I stab at the air with my cigar.] [Btw, I'm smoking a cigar.]

JG: What other misconceptions would I like to correct?
AHG: [Counting on my fingers] One. Hitch didn’t hate all eggs, he just hated the fried ones. on the other hand, he loved a well-executed soufflé and was a big fan of Alma’s Quiche Lorraine.

Two. He didn’t hate actors. Sure, he made jokes about treating them like cattle, but he counted many actors—men and women—among his closest friends: Carole Lombard, Ingrid, Grace, Cary Grant, Robert Cummings, to name a few.

Three. He claimed he didn’t drive. But, in fact, he did. My gosh, do I have to prove it? Here’s his driver’s license. Wanna check his thumb print? Are ya satisfied? And whether you're satisfied or not, you can just beat it. 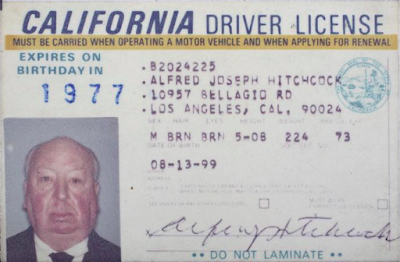 Deborah said…
Hello:
THANK YOU! I teach Hitchcock in high school (yes you read that right!) and I'm always telling my kids that Hitchcock's films are the OPPOSITE of misogynist as they ALL feature women oppressed by the patriarchal system who prevail. In additon, in all of Hitchcock's films he explore the idea of the "couple," and what a good relationship might look like under this system. And he does not often end up with an optimistic outlook - except for the couple in the Lady Vanishes and perhaps the couple in The Trouble with Harry, Hitch always leaves us with some element of doubt as to whether the couple will in fact "work out." (I mean, c'mon do we really think that Devlin is a changed man just because he realizes he really loves Alicia?) And why not? Chances are, under patriarchal society, they will not. From the Lodger on (Golden Girls sign flashing a warning) to Rear Window (The movie is dedicated ultimately to Lisa, but she still has to hide what she's reading (i.e., her language) from L.B. at the end) to North by Northwest (we know they'll have great sex but as to whether a man who's been divorced twice can actually work with a woman who's "life has been like that," remains uncertain.) we are always left to wonder.
I too believe that I have some connection to Hitch and can actually boast six degrees of separation, as my father's first wife appeared on the same episode of What's My Line as he did, and a former boss of mine ran a movie theatre that he visited.
Thank you again for your love and dedication to this great, great artist. I always look forward to reading your posts!
August 3, 2015 at 4:05 PM

Joel Gunz said…
Beautiful post, Deborah - Thanks for sharing! Yeah, I think part of the beauty of Hitch's films is that they really do try to see all sides of the story. So there;s a lot of wisdom w/r/t family matters and the "battle of the sexes." I think Hitchcock's couples are only *beginning* the hard work at the end of the movie. Will Jeffreies and Lisa Fremont, or Mark Rutland and Marnie's relationship surviver without professional counseling?

That's a great set of connections! Where was that theater?